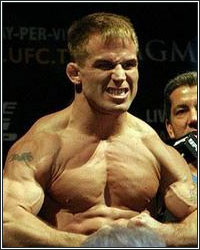 Sean Sherk talks in depth about his ordeal with the California State Athletic Commission and how it's impacted his career. You don't want to miss what he had to say as he shares his thoughts on the upcoming interim title fight, BJ Penn's recent comments about cheating and much more. "I could be ready for February," stated Sherk who's eager to get back inside the Octagon to fight for his dignity. Check it out!

PC: How are you doing Sean?

SS: It's going alright, you know? I'm trying to march forward and figure out what's going on with my career.

PC: Have you heard anything from the UFC about your next possible fight?

SS: I'm being told some time early next year. I'm not real sure yet until we get something in writing. I don't really know.

PC: You've been through a long process with the commission and the rescheduled dates. Could you tell us what you have been going through these past couple of months?

SS: It's stressful, obviously, trying to defend myself for something that I did not do. It's been a long process and it's been delayed several times by the commission. I'm glad to get the first part of this thing over with. I'm done dealing with the commission itself, but I want to move forward with this thing and still pursue this because I'm still maintaining my innocence and I don't want to be accused of something that I didn't do so I'm still going to go forward with this thing and I'm suspended for 6 months and it's 6 months from the day of the fight so I'll be eligible to fight in 4 weeks. I'm just trying to move on.

PC: I know you stay in the gym. How stressful has it been to have that put on hold with the delays in the verdict and going in and out of courtrooms while you see these other lightweights vie for position?

SS: It's been real stressful .I'm a fighter and I love what I do. I want to train, fight, get in the gym and train for fights, I mean, the whole process for me is great. I love the whole thing so it's tough sitting on the sideline. I was sidelined 9 months after I won the belt because I tore my shoulder and that was tough because I couldn't train for a while because of an injury and now I'm sidelined for another 10 months with these false allegations which is hard too because I can train and I'm ready to go. I want to fight, but I can't because I have to deal with these jackasses. It's a tough situation man. I can't even describe how tough it is. I'm a fighter and I'm not going anywhere so I'm just going to continue to do what I do.

PC: We saw how you train and all of the supplements you take on your All Access episode. Do you think you're being punished for your physique because you look to par?

SS: You know, I mean, definitely. People look at me and the first thing they think is steroids. People don't realize how much training and how much effort and dedication goes into what I do. I train 12 weeks for a fight. I start dieting 12 weeks before my fights. My diet is picture perfect. I don't have cheat days. I don't eat junk food or nothing man. My diet's perfect. I train 2 or 3 times a day and 6 days a week. My metabolism is good. I have great genetics. Everyone in my family has got a good build, even the people that don't workout. Genetically, I have good genetics on top of everything else so the people that want to make these accusations are the lazy people that sit around eating Doritos and they figure the only way you could get in shape is if you do steroids. They don't know because they watch the shit on TV, but they don't actually do it.

PC: BJ Penn has been making comments about not fighting you unless you're totally cleared because he doesn't want to fight a cheater. How do you respond to that?

SS: I think BJ Penn is a punk. Who the hell is he? He's won one fight in a couple of years now and it's just whatever man. He wants to make all of these rules and regulations, but who the hell is he? I'm the champ in my eyes so I don't care if he fights me or not, there's a whole bunch of guys that could fight me right now. It's his loss, not mine. He needs me more than I need him.

PC: What do you think of BJ and Joe Stevenson fighting for an interim title?

SS: I don't like the idea of an interim title. I'm eligible to fight in 4 weeks so why not let me fight. I don't know, I don't like it, but there's nothing I could do about it so we agree to disagree basically.

PC: Have you been training to where if a fight came up for late January or February, you would be ready for it?

SS: I could be ready for February. I've been trainingwell, maintenance, you know, 3 or 4 days a week about an hour a day. I'm 50/50 right now with my diet right now. I could be ready to fight in probably about 8 weeks.

PC: You've fought in higher weight classes. Just so people could get an idea of how tough you guys train, how tough is your cut to 155?

SS: My walk around weight is 175. I cut 20 pounds. The last couple of days, it gets pretty rough. My metabolism moves so damn fast, if I cut my meals down, I lose weight pretty fast. It's rough in the end, but it's not too bad.

PC: Aside from the steroid situation that was created from this fight, what did you think of your performance against Hermes Franca?

SS: Overall, I think it was pretty good. I got a chance to show my Jiu Jitsu, my cardio and my work ethic. I was happy with my performance all in all.

PC: It seems like you would be content with the reduced suspension, but you seem pretty adamant about getting your name cleared as a performance enhancer user. Is that the case?

SS: This is not even about getting a suspension lifted or whatever, but I want to get this thing overturned. I didn't take Nandralone and I don't want this crap on my record for the rest of my career. I've already lost everything. It's going to be a long time before I'm ready to fight. I'm probably looking at 9 or 10 months before I'm able to fight; before they can find a fight for me. I got fined and now they have this interim belt. I've already lost everything, I've got nothing else to lose now. I'm just fighting for my dignity. I was wrongfully accused and now I want to make this thing right.

PC: It seems like a lot of positive test have come out of California. You said you will never fight in the state of California again. Do you stand by that?

SS: I will absolutely not fight in California. That is not even an option for me. There are 2 things I will not do again, 1.) fight in the state of California and 2.) I will make sure that my test before I fight, that my sample will not go to Quest Laboratories. They made a lot of mistakes on their part and of course nobody over there will admit that, but we have documented mistakes that they made throughout that entire process, including carryover on the same machine that they tested my sample on that 3 people that tested before me tested positive for steroids. 3 peoplesteroid, steroid and steroid and then here comes my test and its documented carryover because they used the same machine for everybody. There's documented carryover on the machine that they tested my urine with. Quest Laboratories will absolutely not ever get another sample from me again and I will not fight in the state of California ever. No way!

PC: I appreciate your time Sean. I hope everything works out for you. I can't wait to see you back in there man. Is there anything you want to say in closing to your fans?

SS: I've had a real strong support system throughout this whole thing. A lot of loyal fans and a lot of people supporting me and I really appreciate it. My family and my friends who have supported me since day one and the Minnesota Martial Arts Academy has always had my back and it feels good to have people in your corner helping you out and times like this, you need a good support system and that's something I've been real fortunate with. I appreciate it!