FOR THE LOVE OF MONEY: TYSON-HOLYFIELD 3? 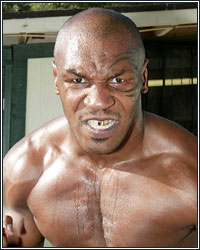 According to a recent interview with Boxing Talk, former undisputed heavyweight champion Mike Tyson has hinted at a possible return to the ring for a third fight with 4-time heavyweight champion Evander Holyfield. Although at first glance it may appear as though Mike Tyson is eager to throw his name back into the heavyweight mix, a closer examination of the interview reveals that it may be nothing more than an attempt to make some quick cash. When asked whether or not he would be interested in possibly fighting Evander Holyfield later this year, Tyson stated, "Sometimes I say yeah it is and sometimes I say it isn't. I'm in one of those up in the air moments. It's something I want to do; it all depends on how many tickets [or millions] are involved."

Tyson went on to reveal that despite the fact that it may appear as though he's on an upswing now that he's working on a movie and an autobiography, he's actually still "pretty down" and the money doesn't come in quite as fast as it does in the fight business. Regardless, Tyson is steadfast in his belief that he can make another run as he states, "I think I'm going to go at it hard one more time." Tyson continued, "I want to just get in the gym for three months and then see how I feel about it." Regarding Holyfield, Tyson stated, ""He's the guy for me to fight and I could always get up to fight him. He's the kind of fight that could make me have an affair with boxing again. I don't know if I can fall back in love with boxing, but I'm ready to have a love affair for a few months." Whether he's more interested in making another run or collecting another paycheck remains to be seen, but one thing is clear, when it comes to the heavyweight division, Mike Tyson is still the most intriguing attraction.