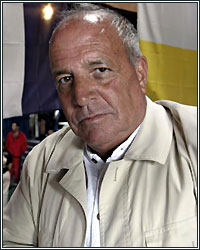 Jeff Wald, Executive Producer of the hit boxing reality show The Contender, had a lot to get off his chest in regards to recent comments made about the possibility of welterweight contender Alfonso Gomez getting his opportunity at a world title on April 26th against WBA welterweight champion Miguel Cotto. You don't want to miss what he had to say in this explosive interview. Check it out!

PC: I saw you had a rift with a certain website owner. I just wanted to give you a chance to speak your peace because it's obvious you won't get unbiased journalism over there.

JW: Here's the dealand you can quote me. I'm not a big fan of Greg Leon. Greg Leon is bad for boxing. He's a bottom feeder. He specializes in calling fighters and making them disgruntled, blowing smoke at them, telling them the grass is always greener at the next place and trying to be a player. Nobody reads his website anyway so I probably shouldn't bother talking to him. It really has no readers and he has no credibility. He can't get credentials at Main Events, Golden Boy and he can't get credentials with us. He doesn't get credentials with a lot of people. He's one of the only people I know that doesn't get those credentials and the fact of the matter is, he's bad for the business. Everything with him is negative. We had a couple of incidents where he interfered with our contracts and we put him on notice about it and he hasn't done that since, but he's found another way to irritate us.

He sucked Cintron, who I think is a nice guy, into an interview where he smashes Gomez thinking that's going to get him a fight with Miguel Cotto. The fact is, Bob Arum is too smart for that and Miguel Cotto is too smart for that. If they want Cintron, they know who he is, where he is and who his people are; they would call and tell him that. Greg Leon seems to think that guys talking trash on his website is going to get them fights and that's bull. These fighters should realize that's not the way it is and everybody talks to everybody. Promoters make the best fights possible and if Arum decides that Gomez is the best fight for Cotto, then that's the fight that Cotto is going to do regardless of what anybody says. I feel bad for Cintron because I got to know him a little bit when he was on the card with the Gatti fight. I think he's a nice guy. I like his promoters, Main Events, they're nice people and I think he's a nice guy and I think he shouldn't have lowered himself talking to a bottom feeder like Greg Leon. All Greg Leon could do is suck him into saying bad things about Gomez and that's not who Cintron is. Gomez would never say bad things about him. None of our fighters are beneath a guy with a belt like Cintron has for him to talk that way and it won't get him a fight.

PC: That's funny because he's trashing the young stars who are trying to mix it up and then promoting Tyson/Holyfield 3.  I think his advisory group might be getting in the way of him being a website owner of a media outlet.

JW: I can tell you there's not going to be a Mike Tyson vs. Holyfield 3. I can promise you that. Nobody pays attention to what this guy says and I shouldn't have dignified it by calling him up and yelling at him. I feel the same way when I step in dog shit; I just want to scrape it off of my shoe. I shouldn't have lowered myself to acknowledge he's alive because in reality, he's not alive. He's a speck. He's the bottom of the barrel.

Greg Leon and those people never promoted a fight. They don't have a clue. For him to even suggest questioning Bob Arum, who has been doing this along time, before me and any of us without any experiencethere's an expression, "critics are like eunuchs in a gangbang." [Editor's note: the actual expression goes something like, "Critics are like eunuchs in a harem; they know how it's done, they've seen it done every day, but they're unable to do it themselves."] That's what I see him being. He's a know-nothing guy with a know-nothing site who can't get credentials. Half of the promoters won't even give him credentials and he's attacking guys. I won't dignify him with another answer, but I will say this, "He who laughs last, laughs best." I will get the last laugh.

JW: Well anybody he's advising won't go far anyway because none of the promoters will deal with him. He could advise them all he wants. You guys should get Shane Mosley on your website and let him make a statement about getting advice from an idiot. I just spoke with Bob Arum and he just laughed at the guy.

[Editor's note: For those that don't know, Gregory Leon is the current owner of the website Boxingtalk.com. He first garnered the ire of certain industry execs and boxing fans by publishing the names of the final contestants for the first season of The Contender several months before the airing of the show without so much as a spoiler alert. He would then go on to do the same thing for season 2 as well as season 3.]