10 FIGHTS THAT WE NEED TO SEE IN MMA! 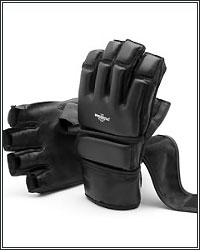 Here's a list of the top ten fights that I feel MMA fans should be treated to in the very near future. Some of these fights were picked because they're long overdue, some were picked because of their intrigue, and some were just picked due to their potential to be a classic, but all of them are bound to be exciting and entertaining.

#10 - TITO ORTIZ VS. FORREST GRIFFIN 2
The first time these two met, we got a crowd-pleasing clash with very good back and fourth action. Personally, I actually think his knee injury may have been a factor. But since that bout, Tito's standup has come full circle and with Forrest's willingness to stand and trade, I think the rematch just might exceed the back-and-fourth action of their first encounter. Depending on the outcome of Ortiz/Evans, we just might get a chance to find out.

PREDICTION: ORTIZ BY GROUND AND POUND

#9 - ANTONIO NOGUEIRA VS. GABRIEL GONZAGA
This is one of those "teacher vs. pupil" fights where we'll either see the passing of the torch or the crowning moment of a legend. Gonzaga is a young, big and very strong kid who's Jiu Jitsu would give anyone fitsanyone except for Nogueira. It takes a true MMA fan to really appreciate the great ground game that these two, who are at the top of their Brazilian Jiu Jitsu, bring to the table. UFC 73 will let us know just how much Nogueira has left in the tank when he takes on Heath Herring. Shortly after, Gonzaga will have his hands full with "Captain America", Randy Couture. Don't count this fight out down the line.

#8 - NICK DIAZ VS. KARO PARISYAN 2
I don't think you can say the names of Nick Diaz or Karo Parisyan and the phrase "boring fight" in the same sentence. Diaz would definitely have to get back into the good graces of Dana White if we're ever going to get a chance to see this fight, but man it would be a barn burner. Jiu Jitsu mixed with Judo throws; Diaz's bad boy attitude and Parisyan's Armenian pride; not to mention  the run-in that Nate had with Karo on the Ultimate Fighter Season 5. The stage is is already set for a rematch that would come down to the wire.

#7 - ANDERSON SILVA VS. DAN HENDERSON
Personally, I think we should be getting this fight instead of Jackson/Henderson. Obviously, as we saw against Wanderlei Silva, Henderson has great strikes and enough power to compete with anyone. I just think he's more of a middleweight than a light heavyweight. Silva is also a great striker, and both men are very accurate. A great technical fight with good standup. A war of attrition.

#7 - PAULO FILHO VS. RICH FRANKLIN
A classic clash of styles between striker vs. Brazilian Jiu-Jitsu. Can Franklin keep the powerful Filho at bay with his superious striking ability? In my opinion, Filho's best chance is to get Franklin on the ground and to keep him there, but that's easier said than done. Franklin has a very underrated sprawl. If he can avoid some of Filho's takedown attempts, he's got the killer instinct to finish him off. I'm not so sure the same can be said about Filho, but I'd love to find out.

#6 - MATT HUGHES VS. BJ PENN 3
I don't we'll ever see these two in a boring fight. BJ thinks Matt is a hillbilly and Matt thinks BJ is a spoiled brat; those type of fighting words are sure to lead to another explosive, action-packed fight (although I don't think Matt minds being called a hillbilly too much). The two guys really just don't like each other and their contrasting styles make for an exciting clash. I don't think Hughes will be willing to stand toe-to-toe with Penn like he did in their rematch, so I'd expect him to try for the takedown where he can use his bread and butter: his wrestling ability. However, Penn is so well-rounded on the ground that it could be a dangerous position for Hughes. The first two fights were very entertaining and, assuming Penn is in top shape, the third one would could surpass the excitement of the first two.

#5 - FEDOR EMELIANENKO VS. RANDY COUTURE
Most people wouldn't give the 44 year old Couture a chance in this one, but it could turn out to be a tough fight for Mr. Emelianenko. The opponents that have given Fedor any trouble have all had strong wrestling skills, something that Randy is incredible at. Don't throw your computers out of the window just yet Fedor maniacs. Couture himself would face a lot more dangers in this fight, including Fedor's relentless attack and vicious ground and pound. Due to his calm demeanor, Fedor doesn't get rattled at all and unfortunately for Randy, I think the person that gives Fedor his next loss will have to posses great submission skills as well as wrestling. Although Fedor hasn't looked quite as spectacular in his last few outings, the guy knows how to win and that will spell trouble for just about anyone who steps up to face him, including Randy Couture.

PREDICTION: FEDOR BY GROUND AND POUND

#4 - BRANDON VERA VS. MIRKO "CRO COP" FILIPOVIC
Two very good stand-up fighters that could make for an interesting fight. When whispers of this fight were first brought up, Cro Cop fans were saying he would destroy Vera, but now that Gabriel Gonzaga has shown that Cro Cop is indeed human, a fight with Vera is extremely intriguing. Personally, I think thought of Cro Cop landing a high kick and eventually knocking out his opponent is getting old. Although he has great strikes, he'd be much slower than a younger, faster Vera. Furthermore, as we saw in the Gonzaga fight, Cro Cop's ground game is still pretty weak. He looked like a fish out of water when Gonzaga was raining those elbows down on him. Vera is a very well-rounded fighter that can mix it up with the best of them. His Muay Tha clinch, as well as his submission skills, could give Cro Cop a lot of problems. I'm ready to get flamed for this prediction, but

#3 - SOKOUDJOU VS. MAURICIO "SHOGUN" RUA
I think we can now consider Sokoudjou to be one of the top light heavyweights in the world. If his wins over Antonio Nogueira and Ricardo Arona were just luck, then man, I'd love to have some of that come my way. Stopping two of the top light heavyweights in Pride in less than three minutes isn't luck..it's just impressive. As for Shogun, you just can't say enough about his abilities. He has great striking skills as well as a Muay Thai clinch that he knees very well out of. However, I think that his Muay Thai clinch will play right into the hands of Sokoudjou's best asset; his judo throws. It's hard to believe that Sokoudjou already has two great knockouts in Pride and we haven't even seen his strength yet; his Judo. I'm not one of those people who thinks that a particular fighter is unbeatable and quite frankly, Shogun is not the same fighter he was before the Mark Coleman fight
.
PREDICTOIN: SOKOUDJOU BY KNOCKOUT

#2 - FEDOR EMELIANENKO VS. MIRKO "CRO COP" FILIPOVIC
Their first encounter was one of the most anticipated fights in MMA history. Personally, I didn't think it lived up to the hype, but it definitely had moments of brilliance and enough action to warrant a rematch. The fight would be huge just off of their names alone. Most people would prefer to see it in a ring, but a fight of this magnitude deserves to be in the biggest organization; the UFC. Of course, the UFC would first have to acquire services Fedor, and that's looking like it's going to be easier than done. However, with the UFC going global, Dana could put this one in Russia and wooooooooothe atmosphere, as well as the sales, would be through the roof.

#1 - TAKANORI GOMI VS. NICK DIAZ 2
Their first clash was one of the greatest MMA fights that I've ever seen. Great back and fourth action with both fighters being hurt and Diaz finishing it with a gogoplatajust amazing. Unfortunately, the outcome of this fight was tainted due to Diaz testing positive for marijuana. I thought the no contest was a bit harsh and in my opinion the series is Diaz-1, Gomi-0. I'm sure Gomi will be in much better shape for the rematch; a rematch that would have a title on the line as well as other perks. Neither fighter has been in a boring fight and neither fighter will lay down for anyone. Can Diaz repeat his amazing performance or will Gomi learn from his mistakes in the first fight? Hopefully we'll get these questions answered in a must see rematch.