SOKOUDJOU: "SHOGUN HAS BEEN DUCKING ME SINCE THE PRIDE DAYS!" 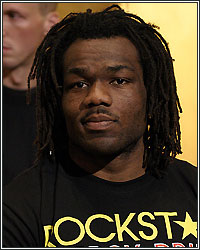 "Shogun's camp told me that to fight him, I had to fight Cyborg first. I told them I want to fight Shogun, not Cyborg, and then Pride went away and now he's in the UFC and he hasn't fought for a minute. I know he got injured for his last fight, but I think by the time I'm ready to fight again, hopefully he should be ready and will take the fight," stated UFC light heavyweight contender Sokoudjou as he talked about his strong desire to face Mauricio "Shogun" Rua. Check out what else he had to say about Rua, his win over Kazuhiro Nakamura at UFC 84 and much more.

TS: I was born ready brother.

PC: Congratulations on the win over Nakamura. How did you feel man?

TS: Ah man, it felt great. I worked hard for this and I could not go home with a loss. I told myself, "let's kill this guy and go party afterwards."

PC: Did you have a good time out there?

TS: Yeah, it was pretty fun.

PC: You had your knee wrapped pretty tight. Everything okay with it?

TS: Yeah, I had a red ankle brace on and I wanted to get some white in there somewhere so it was just for the look. I wanted to get white in there somewhere and make it look brighter. I watched my fight in Pride against Arona and I had my knee taped and it kind of brought out the red in my shorts. I just like the color so I said, "let's tape it and have some fun." Like I said, I'm here to have fun so whatever I need to do, I'll play around with that stuff.

TS: I put it this way, Nakamura is a world-class Olympic athlete. I never had the chance to go to the Olympics Judo-wise. People don't pay to come watch grappling. They pay to come watch people beat the crap out of each other. That's my jobto go kick, knee, and elbow and beat the shit out of people and go home. I'm not here to prove that my Judo is better than anybody's. I'm here to make the money and the only way I can make the money is by hurting people.

PC: You got back to throwing some of those hard leg kicks that we got accustomed to when you were in Pride. Was the gameplan coming in to chop him down?

TS: I watched his fights and he was kind of lazy checking kicks. I kind of gauged that if you throw one or two kicks, he might not respond properly and he didn't so I kept going through the motions. I'd kick his leg and then try to kick his head, but he grabbed my leg every time I would go up.

PC: You looked a lot more comfortable for this fight. How did you feel going into this fight?

TS: I felt great. I knew there was no way I could loose this fight. I had no pressure. I just told myself, "no more being so serious." I just wanted to go in there and do what I'm being paid to do and that's fight; that's what I did.

PC: You were in the middle of the kick when you caught him with the right hand. From the outside looking in, it didn't really seem like you had full impact on that right hand.

TS: I kind of hit him hard. I felt it through my glove, but I didn't expect for him to fall. I knew he could take a good shot, but when he went down, I was like, "Shit, there's only a few seconds left to finish him off before the bell rings."

PC: Were you surprised when he didn't come out for the second round or did you see he fell awkward on his knee?

PC: Did you accomplish everything that you wanted to accomplish in the fight with Nakamura?

TS: Not really because I was checking on Sherdog and they say I won the fight by, not a TKO, but leg injury. I feel like I got cheated on thatlike they stole my victory because why would it say leg injury? Before the leg injury, I punched the crap out of his nose. I think like maybe I should've ripped his head off of his body or something. The same thing happened with Arona. I beat him and then they were saying he had a high fever before the fight. I kind of let it go because I thought they might have been right because I wasn't in his corner. Now, with Nakamura, they say he hurt his leg in the fight, but he didn't just fall and hurt his leg. I punched him and I kicked him and he was hurt. The kick happened before the leg.

PC: I know you've been telling me that you want to fight Shogun since the Pride days. You called him out again after your UFC 84 fight. Is this a fight that you hope they put together?

TS: Yeah, I would love to fight that guy. I've tried to fight him ever since I fought in PRIDE and he's been ducking me. Shogun has been ducking me since the PRIDE days. Shogun's camp told me that to fight him, I had to fight Cyborg first. I told them I want to fight Shogun, not Cyborg, and then Pride went away and now he's in the UFC and he hasn't fought for a minute. I know he got injured for his last fight, but I think by the time I'm ready to fight again, hopefully he should be ready and will take the fight.

PC: I can already tell you what people are going to say. What would you do when Shogun gets you on the ground?

TS: Good luck to him trying to get me to the ground. I got my ass kicked once on the ground so you think I just went home and didn't do anything on the ground? I spent hours and hours fighting off of my back.

PC: I appreciate the interview. Hopefully they can get the ball rolling on the Shogun fight. Congrats on a great win. Is there anything you want to say in closing?

TS: I want to thank all of my sponsors and all the fans. I'm looking forward to getting back in the cage as soon as possible. For the UFC, I want to get back in the cage in 3 or 4 months. I hate sitting at home for 6 months doing nothing. If they can get me fights every 3 months, I would be more than happy. Whether it's on the undercard or the main card, I just want to keep fighting until I have no more energy.