SHANE MOSLEY: "I'M GOING TO 140; I WANT TO FIGHT PACQUIAO FOR HIS BELT" 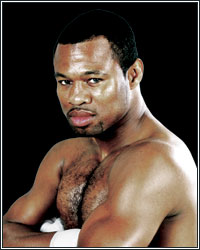 "I'm going down to 140 and I want to fight Pacquiao for his belt because that's a belt I had never won. I have never won the jr. welterweight belt before. Also, at the same time, I can pick up the pound-for-pound belt. I believe I can make the weight so let's do it! There should be no 143, 141, 142 or all this other stuff. I'm going to 140 and fighting at his weight...I'm ready to make the sacrifice once again to get down to 140 or whatever it is. I used to make a big sacrifice to get to lightweight. I know how to make the weight. I know how to get down there and get to the weight and be strong so I can do it one more time to fight Pacquiao," stated welterweight champion Sugar Shane Mosley as he made it clear that he's ready to move all the way down to 140 to meet jr. welterweight champion Manny Pacquiao at his own weight in hopes of capturing the title he never got and proving that he's truly the best pound-for-pound fighter in the sport. You don't want to miss what he had to say!

BT: What's going on bro? How you doing?

BT: So I hear you're dropping a bombshell. You want to go down to 140?

SM: Yeah. I'm going down to 140 and I want to fight Pacquiao for his belt because that's a belt I had never won. I have never won the jr. welterweight belt before. Also, at the same time, I can pick up the pound-for-pound belt. I believe I can make the weight so let's do it! There should be no 143, 141, 142 or all this other stuff. I'm going to 140 and fighting at his weight.

BT: The last time I checked, you had told Richard that you weren't going to pursue a Pacquiao fight anymore and you were pretty much targeting anyone else in the division. What prompted the sudden change of heart?

SM: Well, I thought about my legacy and my history. I think that me being willing to fight and the only thing that stands between us is 143 or 144 and we're going back and forth and he's playing games with Cotto...well, Bob Arum is I should say...Bob Arum is at it again I heard (laughing). But they're playing games and going back and forth. I'm like, well, if I can go to 143, I might as well just go to 140 and win the belt that I never won. It makes more sense. It's a historical thing and I'm coming to reclaim what's rightfully mine!

SM: This is what I want to prove to fans. That I am the best fighter out here today. I'm pound-for-pound the best. I want the fighters, the fans and everyone to know this. So when I go down there and I beat Pacquiao at 140, the bonus for me is winning the 140-pound title. It's not just fighting Manny Pacquiao, but winning the title at 140. I skipped over 140. If I'm going to go down to 143, I might as well go down to 140 and fight him for the belt that I never got. That makes it even better. I'm excited and I'm ready to get started. I'm ready for him to say, "yes, let's go ahead and do it" and let's fight. I mean, there should be no other excuses. There should be no hold-ups for Bob Arum or nobody. I hear now that Bob Arum put out, and I never heard of this, this is the first time I'm hearing, but I'm going to fight Clottey in November and it's already a done deal? So many people are lying now. Mayweather is making up lies. Bob Arum, everybody is lying. I'm the only one stepping up to the plate willing to do something, willing to fight, willing to give the fans what they want, a great fight. I'm the only one stepping up.

BT: It seems like you are the only one stepping up because everyone else is always ducking and dodging and...

SM: (Cutting in) Everybody is ducking and dodging and trying to choose and pick and all this stuff. I'm stepping up to the plate.

BT: Honestly, I can't see how Manny Pacquiao could refuse fighting you. You're making him an offer that he just can't refuse.

BT: Yeah, at one point, I think even Freddie Roach said he'd be willing to have Manny fight you, but you'd have to come down to 143...

BT: Is there anything that would make you believe they would turn that down? Like I said, that's basically an offer they can't refuse.

SM: I mean, if they turn that down, then...people should know Sugar Shane is willing to fight anybody and he's willing to do what it takes to be recognized and considered the best fighter. I want them to know that this is my era.

SM: (Cutting in) I think he should fight me at 147, but you know what, it's okay, I'll fight you at 140! That'll make Bob Arum happy and it'll make Freddie Roach happy.

BT: Do you think Bob Arum is the only person holding this fight up?

SM: Yes! Bob Arum is holding it up. For him to put out a release, something crazy saying that a deal is almost made with me and Clottey is so ridiculous. I never even heard of that. This is so crazy. I never even thought about fighting...why would I fight Clottey? Well, I thought he would beat Cotto, but, I mean, if you had him losing, it was a close fight with him and Cotto. Both fights don't really make sense for Manny Pacquiao or me. Cotto don't make sense for Pacquiao. Clottey don't make sesne for me. Me and Manny Paquiao makes sense.

BT: You hadn't even heard of a potential Clottey fight?

SM: I hadn't even heard of a Clottey fight. It wasn't even mentioned to me. The fight that was mentioned to me was me and Andre Berto. That was the fight that was mentioned to me. I didn't even know Clottey was in the picture. Somebody just texted me and said, "Oh, you're fighting Clottey?" Clottey? What? I never even heard of that. That was so crazy to me. Bob Arum puts it out to the media like that because he's trying to take the heat off of Cotto not being able to make the weight. So he's trying to eliminate me by saying, "Oh, he's going to fight Clottey," so Pacquiao has to fight Cotto. He's trying to manipulate Pacquiao and Cotto once again. Lying again. Tryng to manipulate them.

BT: I know that Pacquiao's lawyer came out a couple days ago saying that they were hoping Cotto would come down to 143 and Bob Arum came out and said that it's not true and the fight was going to be at 145...

SM: (Cutting in) He can't make it! He can not make 143. He can barely make 145. He might not be able to make 145. I'm going to do them one better. I'm going to 140! I want the title at 140! I want the belt! Let's get this on and get the party started. I'm ready to make the sacrifice once again to get down to 140 or whatever it is. I used to make a big sacrifice to get to lightweight. I know how to make the weight. I know how to get down there and get to the weight and be strong so I can do it one more time to fight Pacquiao. It's a historical fight. It's for history. It's a big fight for the fans and for everybody.

BT: Again, I don't see how he could turn this down. Even with the purse split, you already said you'd be willing to give him what he wants. Now you're giving him the weight that he wants. Everything that Manny Pacquiao wants, he's getting with Sugar Shane Mosley so...

SM: (Cutting in) Well, he said we're doing it at 60/40 or whatever the purse was. I know I kind of backed off of it, but now, I'm going to be fighting for his belt. He's the champion so he's going to get more and I've got no problem with that. Let's just get this on. I'll go ahead and do my thing to Pacquiao and then I'll go get Mayweather, corner him, make him fight and then whoever else.

BT: I gotta admit, unlike a lot of fighters out there, you're one of the only ones who is truly concerned about legacy. Money's not an issue and you just want to fight the best. That's extemely hard to come by these days and I just gotta commend you for that bro. It's amazing what you've done in your career and even now, you're still willing to give in to all of the demands that Manny Pacquiao wants. If they turn this down, I'll be dumbfounded and it'll clearly be an issue of Bob Arum wanting to make the fight himself to keep all the money for himself in my opinion.

SM: Yeah, Mayweather said the same thing, even though he lies a lot. He tells a lot of lies a lot, but he knows that; that Bob Arum is just trying to keep all the money. Bob Arum wants all the money and he's lying basically to Pacquiao and Cotto...well, to Pacquiao actually because he's telling him that nobody wants to fight you and Shane won't come down...no! I'm coming down to 140!

BT: I can't even picture Sugar Shane Mosley coming down to 140. That would be an amazing feat to come down and...

BT: Well, it's the fight that the fans want. We put a poll up on our site and I think it was like 58% of the fans preferred for Manny Pacquiao to fight you over Miguel Cotto.

SM: Well, let them know that Sugar Shane is trying to make it happen.

BT: Anything else you want to say in closing Champ?