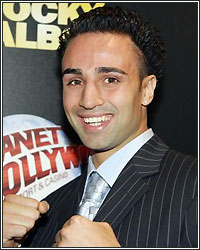 "One thing that Juan Diaz has not seen is someone like Paulie Malignaggi. He has never seen my style. He's fought boxers before, but not a boxer like Paulie Malignaggi. I've seen the Juan Diaz's of the world. I've fought better pressure fighters than Juan Diaz, so I'm not worrying about Juan Diaz's pressure. People are under the impression that this is the fight where Juan Diaz is going to make his mark I have addressed the problem and there is no doubt in my mind that I will put on my best performance on August 22nd. I will dominate Juan Diaz and I will beat Juan Diaz," stated former jr. welterweight champion Paulie Malignaggi as he talked about his upcoming clash with former lightweight champion Juan Diaz. Check it out!

PC: How is training going for your August 22nd fight against Juan Diaz?

PM: Training is going good. I'm preparing adequately and will be all the way up to the fight.

PC: You recently parted ways with Buddy McGirt. How has that affected you and how are you gelling with your new trainer?

PM: It's going good. Sometimes it's just time for a change man. It's nothing personal against Buddy, but he doesn't see things the way I do and I didn't see things the way he did in terms of the technical aspect of it. I know what my weaknesses are, but at the end of the day, I felt like we weren't working around what my strengths were, so it was time for a change. It happens to the best of us. I'm sure he will be successful at what he does and I'm going to be successful at what I do and that's showing everybody that I'm right with what I say. I'm a fast fighter with good reflexes and we base everything I do off of that.

PC: It seems weird saying Paulie Malignaggi will be the bigger man in this fight, but you will. Does that change anything preparation-wise for you?

PM: Nah man. I'm bringing out the gameplan I should've had every time I fight. It will show what my strengths are and I think the gameplan should be that every time I fight. I've been doing things that weren't centered around that and people can say I'm making excuses and people can get offended, but frankly, I'm tired of getting offended. Everybody always has their say, their opinion about my lack of good performances in general. Everybody is an expert so they want to give expert opinions, but at the end of the day, nobody is an expert when it comes to Paulie Malignaggi but me. I know what the problem was. I have addressed the problem, I have fixed the problem and August 22nd, when I show you what I'm talking about with my performance and my handspeed, the people don't need to expect an apology. What they're going to get is lashed out at right back. People try to say Paulie Malignaggi acts like an asshole, but you just gotta look in between the lines and see why I act like an asshole. You disrespect me and I'm going to disrespect you back, but I know what the facts are. You can disrespect me with no facts, but I'm going to disrespect you with the facts and that's what I'm going to do.

PC: Diaz is a pressure fighter much like Miguel Cotto. Do you feel like you've already faced a bigger and better version of Diaz's style?

PM: Yeah, I've seen pressure guys before, Lovermore Ndou and Miguel Cotto. One thing that Juan Diaz has not seen is someone like Paulie Malignaggi. He has never seen my style. He's fought boxers before, but not a boxer like Paulie Malignaggi. I've seen the Juan Diaz's of the world. I've fought better pressure fighters than Juan Diaz, so I'm not worrying about Juan Diaz's pressure. People are under the impression that this is the fight where Juan Diaz is going to make his mark. It's not "if" he's going to win, it's "how" he's going to win that they're worrying about. So when I do what I do, you will see me lashing out because I'm sick and tired of everybody being experts and know nothing about what they're talking about.

PC: Is there pressure to go out and really look spectacular in this fight because you're fighting him in Houston?

PM: Anytime you fight in somebody's backyard, there is always a little bit of added pressure to make sure you do your thing. You always have to keep the judges in mind and stuff like that. I actually have a lot of faith in the Texas Commission, so I'm not really worried about that kind of stuff. I just have to concentrate on putting on my best performance. There is no doubt in my mind that I'm going to put on my best performance. I have addressed the problem and there is no doubt in my mind that I will put on my best performance on August 22nd. I will dominate Juan Diaz and I will beat Juan Diaz. Then when I dominate him, people are going to be surprised, but they shouldn't be surprised because if they had a brain in their head, they would know.

PC: You guys will be fighting at a catch-weight that is a couple pounds under your 140 pound weight class. Will that be any problem for you?

PM: The 138.5 is more of a problem they had with the weight. They didn't want to come all the way up to 140 pounds, so we made the contract at 138.5. Not that that is something that we wanted to do, but they had more negotiating power with Golden Boy Promotions. They have more leverage than my promoter does on that end of it, but the 138.5 is not going to be a problem. I'll drop down to 138.5 if I have to and I'm going to put the work in to make weight. I'll show the fans that the weight isn't an issue. The weight doesn't mean anything to me. The only thing it did was aggravate me.

PC: Diaz said the weight won't be an issue for him because you can't punch. Does that play into your hands, him thinking he's going to walk through you?

PM: I don't care man. What is Juan Diaz going to do? Is he going to start boxing? He's always fought the same way every single time. You can't learn new wrinkles from a couple of losses. They can tell you what they want man. They trying to say he's finished with school, so now he has more time to put into boxing and all of that. They don't have school in the summertime anyway, so let's not get it twisted. Juan Diaz is the same fighter he's always been. He will always be that fighter and he will be that fighter on August 22nd. It's nothing new to him. There is nothing special about him except for what he has done. He is what he is. At the end of the day, if what he says and the things he says doesn't bother him about me, I could care less. I know what I'm going to do to him. He can go and do all of the talking he wants and I can do all of the talking I want, but the bottom line is we're going to see on the 22nd.

PC: Arturo Gatti was recently put to rest. What did Gatti mean to you as a fighter?

PM: Arturo meant a lot to me. He was my favorite fighter and he is a bigger loss to me then I think some of the other fighters. My thoughts and prayers go out to his family. It was a terrible tragedy. I can only speak for myself, but Arturo made me want to box. He was my hero; my boxing idol. I cried when he lost to Angel Manfredy. I had just met him earlier that week. We were very cool with one another. I didn't see him all of the time, but when I did, it was very friendly. I know he had a great influence on, not just me, but a lot of other kids and it truly is a terrible loss. Nobody's perfect, but no one deserves to go out the way he did. It is a terrible shame man.

PC: Good luck on the 22nd Paulie. Is there anything you want to say in closing?

PM: The fight is coming and I will win and then people will hear what I gotta say. I've been hearing what everybody else had to say for the past 8 or 9 months, so after August 22nd, they're going to hear what I have to say and too bad if they don't like what they hear.