LUKE BURRETT: "I'VE ALWAYS BEEN ABOUT QUALITY PRODUCT FOR AN AFFORDABLE PRICE" 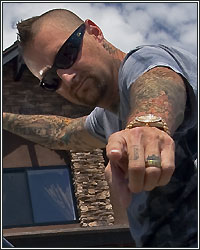 "I want every main event in the UFC for the rest of the year! That's my goal, to get every main event. I've got probably 90% of them right now. Our mission over here is to not only make money for our company here, but it's our task to take care of the fighters. We pay probably more than anybody else pays as far as walk out tees and we also pay very well on residuals and royaltieswe have a personal relationship with just about every one of them and they are our family," stated Luke Burrett, owner of Silver Star Casting Company, as he spoke about the future of his company in the UFC, MMA and beyond. Check it out!

PC: I know you guys at Silver Star are prepping for UFC 103. How is it going?

LB: It's going good. I've got Franklin, Trigg and Emerson on that card, so we're just finishing all of the signature T-shirts. We're actually going to be heading out to that fight as well.

PC: What's the process leading up to these events Luke? How do you guys go about picking the fighters you want to sponsor?

LB: Our thing is to always build our business around champions. And champions don't necessarily mean people that are world champions, even though that's always nice to have, but people that I see something special in; people that are very charismatic and could sell merchandise. So we look for the people that we feel could make the best impact to sell apparel and then we go work hand in hand with them.

PC: I understand Silver Star began in the jewelry business. That's far from the fight game. How did you guys cross over into the fight game?

LB: I've been in the fight game for quite a few years. In fact, if you go and get some of the old UFC videos, you will see me and my wife talking on some of the videos. I sponsored Kimo probably 16 years ago. I was always a huge MMA fan. I was just never big on the apparel aspect of it. When I finally saw MMA make the turn and become a profitable business, I went out and took it seriously and said I better go out and get some world champions. We went out and got Rashad Evans and he won the world title against Forrest Griffin and then we got GSP and he beat BJ Penn to retain his title. So that was our introduction into the UFC and MMA.

PC: How many fighters are you guys currently sponsoring and let's just say in a year's time, how many guys would you like to sponsor in that time?

LB: I want every main event in the UFC for the rest of the year! That's my goal to get every main event. I've got probably 90% of them right now. Our mission over here is to not only make money for our company here, but it's our task to take care of the fighters. We pay probably more than anybody else pays as far as walk out tees and we also pay very well on residuals and royalties. We treat these guyswe have a personal relationship with just about every one of them and they are our family. It's me, my wife and my child that own this company and we are very hands on with all of the fighters.

PC: That's important because when a guy is wearing a Silver Star shirt into the cage, he is a representation of your company, so how important is it for you to know these guys in advance?

LB: It's super important. I get calls every day from guys that want me to sponsor them and I'm blessed to have that opportunity. I never downplay anybody, but there are some guys I just pass on because, like I said, we are on a mission. We want to bring good quality of fighters with a good personality.

PC: I think Silver Stars apparel is a little bit different from any other MMA clothing line because your shirts seem to fit the fighter wearing them. How much input does the fighter have on their signature shirt?

LB: They are very involved. I'm partners with Rashad Evans on his signature line. Urijah and I work hand in hand. Urijah, Clay Guida and Rashad Evans are 3 guys that probably hear from me on a daily basis. I drive them nuts. I'm very involved with my guys. It's my passion. It's the thing I enjoy most about this business. I love fights; I enjoy watching the fights. I'm very involved with the UFC. I love the guys from the UFC and it's kind of become a big family for me.

PC: I think Silver Star, TapouT, Affliction and Jaco seem to be coming on strong. Aside from those 4, there are a lot of clothing companies that come and go. What would you say the key to longevity is?

LB: I've been around since 1993 and we're a lifestyle brand. I know a lot of people preach lifestyle brands, but we are a true lifestyle brand. We started out making jewelry and now we sponsor skateboarders, surfers and I just picked up the #4 polo player in the world. We're doing a whole signature line with him. We have motorcycle guys and monster truck drivers. I think a lot of these companies and their MMA brand will sell a bunch of merchandise, but will it have longevity? I don't know. Everything has its course. Whatever happens in the MMA world, we are positioned to be able to transition into other arenas. I've always looked at myself and, you know, I admire what Nike has done. Obviously we're not a Nike and will never be a Nike, but the formula that they have put out there is the formula that I want to follow.

PC: It's funny you say that because that's kind of how our motto goes, "A Fight is a Fight," and we cover both combat sports, boxing and MMA, equally. Typically, November, December and January are the slow months in boxing, but fortunately for us, MMA doesn't have a slow time, so we jump right over and both me and my partner are very knowledgeable in both sports. We're not just tossing things up just to have it on the site, you know?

LB: You have to, right? You don't just hop on stuff full throttle and say, "You know what, I'm going to bail on everything else." Everything has its course and who knows, boxing could be the hugest thing in 10 years. You never know.

PC: Speaking of boxing, you guys sponsor one of my good friends, Floyd Mayweather Sr. How did that come about and are you guys looking to sponsor more boxers?

LB: You know, we do a few boxers. I pick up guys here and there. KG is Floyd's nephew and he is a friend of ours and he hooked that whole deal up with Sr. It's been a good relationship.

LB: Yep! It's been a good relationship.

PC: I see your line and the first thing I notice is that it's all reasonably priced. Is that due to the recession or is that something you guys watch closely and try not to overcharge for your merchandise?

LB: You know, I think we are making the margin we need to be making. We are in a recession and a lot of people don't have money. I've always been about quality product for an affordable price. I don't need to go too low, but I don't need to go and sell a shirt for $100 either. I want to be able to bring, like I said, a quality product at an affordable price for whoever wants to buy it.

PC: Being a fan first, who are some of the guys you enjoy watching?

LB: I like to watchBrock Lesnar is always an interesting guy for me to watch. He's an animal. I like watching Urijah and I think Clay Guida is my favorite to watch.

PC: On the boxing side, do you have any favorites over there?

LB: Manny Pacquiao! I love watching Manny. We went and watched him ringside for the De La Hoya fight. I actually have a guy in the Philippines trying to close a deal with Manny Pacquiao.

PC: You guys sponsor some of the best fighters out there and I've seen what those sponsorship packages look like so I have to ask you, how did you get so rich?

LB: I ain't rich yet. I'm blessed to have what I have. I started out detailing cars. I come from a family with zero money. I take care of my folks because they have no money. It was just all persistence and hard work and rolling my dough (laughing).

PC: So you started off detailing cars? When would you say you got your break?

LB: I got my break about a year and a half ago. MMA was probably my break.

PC: That's amazing. I appreciate your time. I know you're a busy man. I wish your fighters the best of luck. Is there anything else you want to say in closing?

LB: Go to www.buysilverstar.com and check out our goods. Thanks everybody for buying our gear. If it wasn't for you guys, we wouldn't be where we're at today. Stay tuned because I'm putting out some more hits for you guys!