PACQUIAO IMPRESSIVE IN HISTORIC 12TH ROUND TKO WIN OVER COTTO 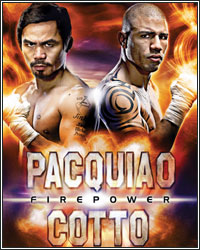 Pound-for-pound champion Manny Pacquiao solidified his status as an all-time great with an impressive and dominant 12th round TKO victory over WBO welterweight champion Miguel Cotto, becoming the firster boxer to ever win world titles in 7 different divisions. Pacquiao's performance was a masterpiece against Cotto, a man that many considered to be a legitimate threat to defeat him.

PREFIGHT
Celebrities in attendance include Magic Johnson, Will Ferrell, Mark Wahlberg, Derek Jeter and P. Diddy. La Diva sings a wonderful rendition of the National anthem of the Philippines. Ednita Nazario sings the National anthem of Puerto Rico. Ramiele, a former American Idol contestant, sings the US National anthem. No mention of how much both fighters unofficially weigh tonight. Pound-for-pound champion Manny Pacquiao begins to make his way to the ring while they show a great video of the legends of the sport. Suddenly, AC/DC's Thunderstruck begins to play,. perhaps an homage to the late great warrior Arturo Gatti. Oh...and then the music switches to Survivor's Eye of the Tiger. Pacquiao's truly doing it up with this entrance. Wow. The crowd erupts as he smiles and steps into the ring. Not to be outdone, WBO welterweight champion Miguel Cotto makes his way to the ring to the sounds of Kanye West's Stronger. He looks intense and focused. Then the song switches to some spanish rap that I don't recognize, but it's fitting for the scowl he's wearing on his face. "LADIES AND GENTLEMEN...LET'S GET READY TO RUMBLEEEEEEEEEEEE!"

ROUND 10
"I'm going to give you one more [round]. I'm going to give you one more," Cotto is told in the corner. Cotto lands a left hook upstairs. Right hand lands for Cotto. Pacquiao just walking him down. Pacquiao just standing in front of Cotto, daring him to hit him. Cotto lands a jab. Left hand down the middle lands for Pacquiao. Another. Right cross lands for Pacquiao. Cotto lands a left. Pacquiao literally just stands in the middle of the ring motioning as if he's tired of chasing Cotto, who's clearly in survival mode. Quick 1-2 from Pacquiao lands to end the round. Ugly round to score as Pacquiao appeared to be taking a breather, but one that Cotto probably deserved just for landing a coupld more jabs.

THE WINNER BY TKO AT :55 OF ROUND 12....AND NEW WBO WELTERWEIGHT CHAMPION...MANNY PACQUIAO

POSTFIGHT
"Our plan and strategy for the fight was not to hurry; take time because we know his strategy, he's going to counter...we were very careful in the early rounds because we don't know what will happen....I tried to test his power in the early rounds, that's why I wanted to get hit in the body and the head. When I control the fight, I got aggressive in the fight and make him pressure...in the early rounds, I was looking for a knockout shot, that's why I didn't throw too many punches...I heard that he was bigger than me and stronger than me...I just wanted to try his power...I kept pressuring him, but I was very careful for his counter...we tried our best that last round to try to knock him out...in the 11th round, I thought they were going to stop the fight. I was surprised he continued," stated Pacquiao about his performance. "My job is to fight in the ring and it depends on my promoter Arum to negotiate the fight...for now, I don't know. Like what I said, I'm going to take a vacation and spend time with my family," he added when talks of a fight with Mayweather were brought up. "I'm pretty sure the Filipino fans are going to be screaming today and they're very happy for the victory I gave to them...to all my countrymen, thank you very much," he closed. "I thought we were going to break him down, which we did...early in the fight, he kind of was testing Miguel's power and laying on the ropes too much...Manny had to make the adjustments and once Manny used his feints and his movements, it was too much for him," staed Roach on Pacquiao's performance. "Well, the whole world wants to see Mayweather, so I want Mayweather," he added. "I tried to bring all I can for all these fans and I'm pretty proud with what I did in the ring...I didn't see where the punch was coming to me and I didn't protect myself well...I fought everybody, you know...Manny is one of the best boxers of all time," stated Miguel Cotto as he shared his thoughts on the performance. "I will continue fighting," he added.