PAVLIK VS. MARTINEZ SET FOR APRIL 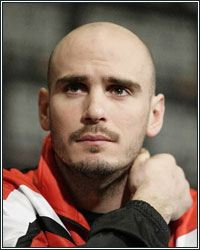 Sources close to the information have just informed us that undisputed middleweight champion Kelly Pavlik  and jr. middleweight champion Sergio Martinez have agreed to terms for an April showdown. The bout is scheduled to take place at the middleweight limit of 160 pounds. The deal is expected to be finalized and officially announced by promoters Bob Arum and Lou DiBella in the coming days.

Pavlik is coming off a 5th round TKO victory over game, but overmatched Miguel Espino. Martinez, on the other hand, dropped a majority decision to Paul Williams in a very close fight that many thought Martinez should have won. The fight promises to be an interesting matchup of styles. Unfortunately for Paul Williams, he's now left without a solid dance partner for his next bout.