FLOYD MAYWEATHER SR: "SHANE IS DONE...DAWSON MAY BE DONE TOO" 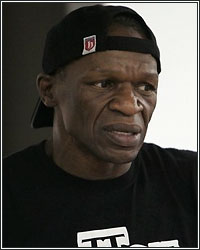 "I think they got it right; nobody deserved to win that damn fight. That was a shitty fight man. Shane has always fought wild and thrown wild punches, but he was throwing haymakers against that dude. Shane didn't look good at all. I'm a tell you the truth man, and people can say what they want about it, but Lil' Floyd beat what was left of Shane out of him. You can factor in his age too, but Floyd made him a shell of himself. There ain't nothing left there man. Floyd beat the shit out of him and he's never going to be the same. So yeah, I thought the fight was a bad fight and the draw was justified because neither one of them deserved to win that fight. Shane is done," stated world-class trainer Floyd Mayweather Sr. as he shared his thoughts on Shane Mosley, Chad Dawson, Roy Jones Jr., Bernard Hopkins and much more. Check it out!

PC: What's up Big Floyd? How is it going?

FM: I'm just taking it one day at a time man. I'm headed to the gym right now.

PC: Do you go to the gym every day or only when you have something going on?

FM: I don't go on Saturdays or Sundays unless I have a guy about to fight soon, and then I will, but with this sarcoidosis, I have to get as much rest as possible. This disease ain't no joke man. Going in and out of the gym is very stressful, so I have to be careful.

PC: I hear you. What do you have in the works right now?

FM: Well, I have to go to California next week to work on this book. They are doing a book on me and they talking about a movie too, but first things first. The book is going to be real, man. They need me there to talk about it and it's going to be a tell-all book. And to tell-all, I'm going to have to talk about Lil' Floyd; good times and bad. If you tell one lie, you gonna have to keep telling them, so it's going to be the truth and nothing but the truth and I tell you what, it's not going to say I was a bad daddy either. But I have to include the bad times, just like I will include the good. When it comes out and you read it, just let me know what you think. It's going to be good man.

PC: I can only imagine. I have a couple of questions for you that my man Michael wanted me to ask you. First off, what did you think of Shane Mosley's performance against Sergio Mora?

FM: Man, I think he fought like a fuckin' woman that can't do nothing but throw wild punches. That's what I thought. He looked like shit. And the dude Sergio, who he was fighting, man, come on man. Please man! He needs to go back to, what was that show called?

FM: Yeah, he can go back to that. Hell, he ain't even that. He can start a show called The Pretenders. How in the hell Shane couldn't hit that man, I don't know. Shane made him look good. I had Shane winning the fight, but the fight was so shitty, I think they got it right; nobody deserved to win that damn fight. That was a shitty fight man. Shane has always fought wild and thrown wild punches, but he was throwing haymakers against that dude. Shane didn't look good at all. I'm a tell you the truth man, and people can say what they want about it, but Lil' Floyd beat what was left of Shane out of him. You can factor in his age too, but Floyd made him a shell of himself. There ain't nothing left there man. Floyd beat the shit out of him and he's never going to be the same. So yeah, I thought the fight was a bad fight and the draw was justified because neither one of them deserved to win that fight. Shane is done.

PC: The other question is, do you think Bernard Hopkins has enough left to beat Jean Pascal?

FM: Bernard about to fight him?

FM: Man, let me tell you what Bernard about to get. First off, Chad Dawson may be done too. He didn't offer anything in that fight. Man, if you look at Chad when I had him, he beat the shit out of Adamek, who is beating heavyweights now. That dude Pascal is a pretender too, man. That dude can't fight. That should have been one of Chad's easiest fights. But after watching that dude whoop Bernard...who was that who beat Bernard up?

FM: Yeah, Joe Calzaghe whooped all of them nigga's ass. He put Bernard and Roy Jones on the corner. Calzaghe is a white pimp. He beat the shit out of both of them and put them on front street. So I don't know, Bernard might go over there and get that again. He shouldn't because that boy can't fight, but it's happened before. He talked all of that shit about never losing to a white boy and Calzaghe ended all of that talk. He put it to rest. I hear Roy Jones about to fight again.

PC: He's fighting in his hometown on October 7th.

FM: Who is he fighting?

FM: Let me tell you something man, Roy can't let what he used to be able to do go. He's been getting the shit beat out of him and I don't see him winning this fight he got coming up. Roy couldn't beat you right now. If you were about to fight Roy, I would bet on that fight and my money wouldn't be going on Roy, I tell you that much. It all started with Tarver, then Glen Johnson whopped his ass and Calzaghe finished him off. He either been getting his ass whopped or just getting knocked the fuck out cold.

PC: Yeah, and you didn't include Danny Green knocking him out in Australia.

FM: When did that happen?

PC: That happened before his rematch with Bernard. You don't remember him being stopped just outside of two minutes before the Hopkins fight?

FM: No, but damn, he done been knocked out more times than I knew about. He fixin' to not wake up one of these damn times. He needs to sit down, man. Roy can't fight no more. Roy needs to find something else to do, just like that boy that fought on the undercard of Mosley-Mora; the one who used to say he can beat Floyd.

FM: Man, please. He needs to sit his ass down somewhere too.

PC: Back to the book for a minute. What made you want to do a tell-all book?

FM: Man, I been getting approached to do one and I think it's time. Anything to take care of me, my momma and my grandkids, man. Anything else, I don't give a damn about. My father died last year, I had a brother just passed away, and you never know when it's your time, man, so I want my story out there because I have a lot to say.

PC: Just really quick, what are some of the topics we can expect you to cover in the book?

FM: Everything man; how I was holding Lil' Floyd when his uncle shot me, my fighting career, when I went to jail and how I was one of the baddest men walking on the eastside of Michigan. I couldn't tell you how many people's ass I done whooped in the streets and I was only 118 pounds at the time; 16 years old. It's going to be a good book, believe me.

PC: I gotta ask you about Lil Floyd's situation now because they have tacked on more charges. The state is involved now and that can't be a good thing.

FM: Let me tell you something man, everybody wants to see this Pacquiao fight. If that fight would have happened already, they would have Floyd in jail. They know its money to be made and that's why he's free now. I'm telling you what I know, man, if they had already fought and Pacquiao won or Lil' Floyd won or whatever, they would have him.

PC: Good luck with the book. I wish you all of the success in the world. Is there anything else you would like to add?

FM: No Percy, thank you. Take care of yourself.