FLOYD MAYWEATHER: "I REALLY DON'T HAVE NOTHING AGAINST MANNY PACQUIAO...NOBODY REACHED OUT" 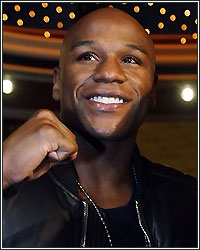 "I really don't have nothing against Manny Pacquiao. I think the people make it more than what it really is because I think it will be one of the biggest fights in boxing history, absolutely. I think that any fight that I'm involved with will always be a mega-fight. It's just so much behind this fight which will make this fight truly unbelievable as far as numbers and as far as people tuning in to watch the event; it's so huge...you gotta realize this, the Mayweather-Pacquiao fight didn't get made because Manny Pacquiao said he wanted two weeks of non-testing. The last two weeks leading up until the fight, he didn't want to take the tests, so that's why the fight didn't happen. Everything they asked of me, I agreed and what I asked of them, they didn't agree...Al Haymon is my go-to guy. We didn't hear anything from Bob Arum...Nobody has reached out. After the first negotiations didn't come through, nobody reached out to Al," stated undefeated pound-for-pound king Floyd Mayweather, who returned to FightHype.com to share his thoughts on a number of subjects. You don't want to miss what he had to say about the upcoming clash between Manny Pacquiao and Shane Mosley, whether or not we'll ever see the top fighters in the sport face off, and so much more. Check it out!

BT: There he is, the truth and nothing but the truth, Money Mayweather himself. What's up Floyd?

BT: So catch me up. I know you've been all over the world and back again since last time we talked. What's been going on? How has the New Year started off for you?

FM: Just living life and hangin' out with the family.

BT: I know any time Floyd Mayweather is ready to do an interview, he must have something important to say. So what are we talking about today?

FM: We can talk about whatever you want to talk about; the fight game, life, whatever.

BT: Well, I guess the obvious question is when do you plan on fighting again, but I already know that we never know what the future holds, right?

BT: I know you don't know what the future holds, but let me ask you, is there still a passion to fight anymore?

FM: Sometimes yes, sometimes no, but I sit back and think about a lot of different things.

You gotta get to know me before you can judge me. When it's all said and done, only God can judge me. Everyboy has an opinion, male and female. I sit back and I think about certain things that go on in our country. I think about the Michael Vick situation. Not saying it was right, but he did his time in  prison for dog fighting and you got people that's out here killing innocent animals every day; innocent rabbits, innocent deer, and innocent birds, but why aren't they in prison . And then you look at the Plaxico Burress situation; he shot himself with his own gun and still went to prison. And then you look at the Ben Roethlisberger situation and you look at the Brett Favre situation and you just put a question mark right there and say this is life. The world loved LeBron James when he was with Cleveland, but once he was free to do what he wanted to do, that's when people turned on him. One of the biggest words in the world is free. He was a free agent; free to go do what he wanted and free to go where he wanted. Sometimes I ask myself, if the owner of the Cleveland Cavaliers was to sell the Cavaliers, do you think he was going to let Lebron James know, "You know, I'm thinking about selling the team, so I'm going to give you stock." Or would he have just sold the team?  The world loved LeBron James when he was with the Cleveland Cavaliers. So he decided to go to Miami and I guess now, he only gets love from one city, which is Miami. They give him death threats and say bad things about his family. I thought we all represent the Red, White and the Blue last time I checked.

In 1996, I represented this country in the Olympic games and even though I got cheated and received the Bronze medal, I still stood up there happy to represent my country, the U.S.A. At one particular time, everybody said I was scared of Antonio Margarito. I truly believe what's done in the dark always comes to light. He was fighting fighters and beating them with loaded gloves. I just think that it's right that all fighters should take a test just to show the world our sport is clean. We got some future Hall of Famers that's been known to dibble and dabble in enhancement products; I'm not saying it's steroids, but people seem to forget about Fernando Vargas, Roy Jones, James Toney, and Shane Mosley. Those are just a few fighters, and I truly believe all of them are future Hall of Famers.

BT: And they all got popped after their fights were already over.

BT: So you think that Manny Pacquiao's career has benefited from careful matchmaking or fighting guys at the "right time" or the "right weight"?

FM: when he fought Marquez for instance, he had two life and death fights with Marquez. I feel that when you get it done right the first time, there's no need for a second, and I got it done right the first time. I was off for two years and when he fought Marquez, Manny Pacquiao was active when he faced him twice. It's really safe to say that when he fought Oscar De La Hoya, he beat a drained fighter. When he fought Miguel Cotto, it was at a catchweight and Cotto had just come off of two tough, grueling fights. Miguel Cotto had just got beat by Antonio Margarito with some loaded gloves and then he fought a life and death fight with Clottey. Pacquiao-Marquez 2 in '08, he won by split decision and he got praise for winning a split decision. A year later, in '09, I fight Marquez  and made it look like I was taking candy from a baby. After the fight, they said I fought a washed up Marquez.

BT: You know, the irony is that even though the fight with Shane Mosley is set, Freddie Roach recently said the fight that he preferred was a fight with Juan Manuel Marquez at 147. How is that fight okay for Manny Pacquiao at 147, but Marquez was supposedly too small for you at 147?

FM: Shane knocked out Antonio Margarito at the age of 37, right? They say that's the best he ever looked. He lost to me at 38. My performance was so dominating, they tried to say Shane Mosley was over the hill. Most people should be talking about how Floyd Mayweather is a great undefeated future Hall of Famer that's his own promoter and that works extremely hard to get to where he's at. Instead, all you hear is hate and jealous remarks from critics who criticize me and, you know, most of the time, the people that criticize me can't do what I can do. I take my hat off to Muhammad Ali. When Muhammad Ali was at the top, everyone hated him. Now that he can barely walk, he can barely talk, the world praises and loves him and I never want to be in that position. That's why I tell every fighter it's only correct that every fighter should take the tests, the random urine and the random blood tests. What's so crazy is when you give interviews to reporters that don't really care too much for you, basically what they're going to do is write what they want to write and discredit you. They're going to write and say what they want to say, no matter what you tell them. It's like this, when I said what I said on UStream, they said I was racist, but the next day when I apologized, they didn't put that on every network and in every newspaper.

Before I fight an opponent, they build them up. They say that this is going to be Floyd Mayweather's toughest fight and possibly his first loss. As soon as I beat them and make them look like an ordinary club fighter, that's when they say, "this guy is washed up, he's too old, he's too slow," and then they discredit me saying I'm not a great fighter.  Manny Pacquiao got Fighter of the Decade, with one loss and two draws, and that was from 2000 to 2010. I was 19-0 from 2000-2010.

The Mayweather-Pacquiao fight didn't get made because Manny Pacquiao said he wanted two weeks of non-testing. The last two weeks leading up until the fight, he didn't want to take the tests, so that's why the fight didn't happen. Everything they asked of me, I agreed and what I asked of them, they didn't agree. When Manny gave blood before the first Morales fight, he lost. He didn't give blood for the next two fights and he knocked Morales out with ease. A lot of times, people don't realize, giving blood doesn't make you weak. Not being able to juice because you have to give blood makes you weak. That's what a lot of people don't realize and don't know.