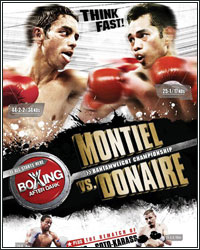 Moments ago, Filipino sensation Nonito Donaire proved why he's one of the best pound-for-pound fighters in the world, stopping former bantamweight king Fernando Montiel in the 2nd round of their highly-anciticpated showdown at the Mandalay Bay Resort & Casino in Las Vegas, Nevada. Using his height and reach advantage, Donaire was able to keep Montiel at bay with a stiff jab and superior technical skills. Although Montiel was game, he was never able to get close enough to land anything of significance before Donaire caught him with a beautiful counter left hook. Relive all the action in FightHype's in-depth, minute-by-minute round-by-round results.

PREFIGHT
The challenger, Nonito Donaire, makes his way to the ring first. He looks confident and excited to get the fight started. The champion, Fernando Montiel, comes out next. He looks extremely focused and intense.

THE WINNER BY WAY OF TKO AT 2:25 OF ROUND 2...AND NEW WBC & WBO BANTAMWEIGHT CHAMPION OF THE WORLD...NONITO DONAIRE