MIGUEL ESPINO: "I'M DOWN FOR WHATEVER, WHOEVER, WHENEVER!" 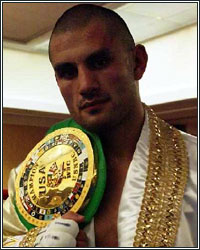 Middleweight contender Miguel Espino talks about his disappointment about the cancellation of his fight with Juan De La Rosa, his future plans as he looks forward to facing Raymond Joval, and his desire to one day challenge for the middleweight title. A former sparring partner of Jermain Taylor and coming up through the amateurs with Kelly Pavlik, you don't want to miss what Espino had to say about this weekend's highly anticipated middleweight clash as he breaks down the styles of both men and shares his prediction on who will win. Check it out!

AC: Well first of all, I know you had a scheduled fight with Juan De La Rosa and that didn't come off. How did you feel about that?

ME: I thought it was a pretty bad way of handling the situation. He pulled out because of an injury. Everyone speculates, as well as myself, that the injury was not having enough heart. Nevertheless, he supposedly got injured. I don't know. Whatever. But come on...six days before the fight? Come on bro, I've fought injured, with a cracked rib, being under the weather a little bit. This is a big fight for a championship. Come on man. That's not the way to do it. Nevertheless, it's all good and I'm not going to give him the time of day.

AC: Well you ended up fighting Arturo Ortega, a guy who you fought just back in June. Though he was a last minute replacement, he was saying how he felt he should've won the fight with you back in June and he was going to knock you out this time. It turned out that you stopped him in 5. How did you feel about that victory?

ME: Real good. I was really in great shape. He came out in the first round swinging and I was just like, "okay, okay". I put the exclamation point on whether or not I won the first fight. I left him with a nice little sore jaw.

AC: Now this gives you an 8 fight win streak. I know last time we spoke that you mentioned you may be facing Raymond Joval early next year on a Shobox card. Is that still the plan?

ME: Yeah, I see that, or if I get that phone call that such and such got injured for a title defense or the winner of Taylor vs. Pavlik wants a tune up fight with someone that's not that big of a danger...are you willing to take that fight? I'm down if the time is right. Not if it's like a weeks notice. We can't do that. I'm always in the gym, but not no week notice. I don't care if it's in their backyard. If Pavlik win's, I'll fight him in his house. If Taylor wins, I'll fight him in his house or Tennessee, or Arkansas, in his backyard, whatever! As long as I have enough preparation to have a great camp. It looks like Joval is going to be the next one, then after that, we climb the ladder slowly, but surely. They called me for a fight with some guy in Arizona, some southpaw in Arizona; the main event for like pennies. I don't think they paid like that even in the 1930's.

AC: (laughing) So they're really trying to shortchange you there.

ME: Nah dawg. Not even shortchange me is the right word. It's like fighting for a meal, a flight and hotel stay.

AC: (laughing) That's crazy. Well hey, I know you mentioned fighting the winner of Taylor vs. Pavlik. Did you fight either of them in the amateurs?

ME: I didn't fight them. They were at 156 and I was at 147, but I've seen them fight and was in camp with Jermain Taylor for the Goodwill Games. We were sparring partners and sparred plenty of times. He was always the guy with natural talent, but never rose to the top. Then all of a sudden, he stepped up and went up a few levels and won the bronze medal. I didn't get to go because I had a broken nose and didn't get to try out. That was a really bad time for me because I wanted to go. But you know, because you're a big boxing fan, that they're going to go up to 168. They both have been at 160 for years and they're both pretty big guys. Kelly Pavlik is weird, like tall and lanky, but we'll see. If things happen and they call me, I'm down. I'm down for whatever as long as they call me with some time to get ready. I wouldn't say no to whoever it is.

AC: So at this point in your career, you feel that you're ready for anybody at 160?

ME: Yes, as long as everything works out. I mean, I know that the money will come and the fame will come and all that, but don't try to treat me like a piece of dirt. Like that fight that they just offered me, that was really bad. I understand that you have to prove yourself and they don't want to spend too much money on a guy that they think they're going to beat. As long as it's reasonable, I'm not asking for much. I'm down for whatever, whoever, whenever.

AC: Being that you've seen both Taylor and Pavlik coming up to where they are now, who do you see winning this fight on Saturday?

ME: I don't know man, but being that you seem to be a big boxing fan, trip out on this...I've seen Pavlik and if you see all his sick knockouts, it's always been when guys are against the ropes or backing up from him because he has the sickest right hand. He's not fast or has a crazy like "ohh" style or a boxer on his toes. He's just a viciously strong puncher. But here's the kicker, I don't know if he'd have that if a guy came out like a Hagler to Hearns. Hearns was much faster than Pavlik. Pavlik is like weird slow, but if he hits you, he breaks your jaw. So if Jermain were to back him up, he'd mess up Pavlik's whole gameplan. I've never seen Pavlik back up, and I mean never, ever. If Taylor tries to box him and keeps his right hand low because he sees Pavlik's punches coming and is like "ahh, these are too slow" and Pavlik hits him, he's going to knock Taylor out bro.

AC: Man, if you look at Jermain's last fight against Winky, Ouma and Spinks, he seems to have gotten into the habit of going backwards even though he was the bigger, stronger guy.

ME: He did that against Kassim Ouma and he's a smaller guy.

AC: Yeah, I don't know if he does that to bait them in, but it seems to be a habit now.

ME: Yeah, and if he does that with Pavlik, I guarantee he's going to hit the canvas or get knocked the hell out! Pavlik is not a fast puncher. He's like boom boom (slow), not boomboom (fast) like Hearns was. He's just real weird slow. If Taylor is going to back up to the ropes, he's gone. If he does that getting on the ropes, I don't why he does because it's never effective.

AC: I agree. Man, that's a good way to look at the fight. Honestly, my prediction for the fight was for Taylor to knock out Pavlik in 6 and now that you mention it the way you did, I'm thinking about it and I might change my prediction.

ME: I was watching the countdown and it seems like they're going to try and box Pavlik and I feel that, but I've never seen Pavlik back up. I've seen him since the amateurs and the only time he would lose is if the guy would pressure him and push him back, which is hard to do because he's really tall and lanky, I mean, he is strong even though he has no body whatsoever, no muscle, no nothing, but he is strong. It must be some weird white boy thing in Ohio. He doesn't have like no six pack or intimidating look about him, but he is strong. The only time I've seen him lose in the amateurs is when guys would back him up. That's not the gameplan from what I've seen from Emmanuel Steward. They're going to try and box him and be all cute with a little jab, jab and Pavlik is going to be all up in his face like he was against Miranda.

AC: Well in the Miranda fight, what I saw was Miranda flat from round one. I mean, all credit to Pavlik for what he did, but from the Miranda that I'd seen in the past, he was flat. Now I don't know if that was from making weight or just maybe even Pavlik himself. Miranda's punches, when they did land, looked almost like a tap.

AC: I think Pavlik is good enough to beat Miranda, but Miranda was so flat that it made Pavlik look that much better.

ME: Yeah it did and you can see that they were both fatigued, but Miranda did look flat. Keep in mind that he walks around at like 190 to 195. That type of fighter, like opposite of Pavlik, a freak of nature, what an awesome body, but he had so much trouble making that weight. You can't take anything away from Pavlik, but you saw in that fight that Pavlik wasn't fast or tricky or slick, he just gets in your face, throws what he has and takes what you have and just fights. He got the best of him and knocked him out.

AC: I agree, I agree. Now I don't want to keep you on the phone all night. It looks like you have Raymond Joval next, but you're willing to face anyone at 160 as long as it's reasonable.

ME: Yeah, don't try to take advantage of a fighter. Take care of future prospects and future champions. That's all I'm saying.

AC: Miguel, is there anything you'd like to say to your fans in closing?

ME: Just keep a look out. It sucks because I haven't fought on TV, but it is what it is. I'm just keeping busy and you should see me on TV soon enough. God willing, with hard work and my trainer John Bray, it's going to be a bad, bad fight. Bad as in good. It's going to be a fan-friendly fight and it's going to keep people wanting to see me on TV and get me closer to what I want and that's a world championship.