VICTOR ORTIZ REACTS TO MARCOS MAIDANA'S WEIGHT GAIN: "I DON'T LET MYSELF GO LIKE THAT"

VICTOR ORTIZ A BIG FAN OF CONOR MCGREGOR, BUT DOESN'T THINK HE SHOULD REMATCH NATE DIAZ AT 170 AGAIN

VICTOR ORTIZ INSISTS AMIR KHAN WILL OUTBOX CANELO; SAYS CANELO IS SMALLER THAN HIM AND SHOULD FIGHT AT 147

ANDRE BERTO CLOWNS VICTOR ORTIZ FOR GETTING "CLIPPED" BY MAYWEATHER; SAYS HE TOOK NO PUNISHMENT

ANDRE BERTO SAYS VICTOR ORTIZ HAS A WEAK HEART; EXPLAINS WHY REMATCH WILL BE DIFFERENT
Tweet 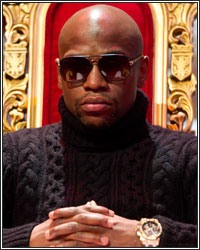 "When you hear stuff about Triple G, like I said before, I told Triple G what he had to do if he wants a fight with me. He's gotta call out Andre Ward, beat Andre Ward, and then I'll fight him. I haven't seen him call out Andre Ward yet," stated retired undefeated former pound-for-pound king Floyd Mayweather, who killed rumors suggesting that he was considering coming out of retirement for a potential showdown with undefeated 160-pound champion Gennady Golovkin. In a recent interview, Golovkin's trainer, Abel Sanchez, claimed that Mayweather was "laying the groundwork for a comeback" against his star pupil. Mayweather, however, once again made it clear that he was perfectly content in retirement, but if he did decide to come back, there's only one name that's he's considering.

"Listen, if I want to fight someone, believe me, I'll call you up. As of right now, let me rest. All I'm saying is let me rest. Let me rest. Please let me get 365 days of just rest. 'When you gonna fight again? When you gonna fight again?' All I want to do is just enjoy being retired. It's crazy, I told them when I leave, they still gonna miss me," Mayweather explained during a recent conversation with FightHype.com. "If I did think about coming back, there's only one name I'm looking at and that's Danny Garcia. I have to say Danny Garcia because you look at Danny Garcia, he's undefeated and he's a world champion. If I'm going to fight a guy, it's going to be a world champion."