EDDIE MUSTAFA MUHAMMAD: "WE JUST GONNA GO DOWN TO DETROIT AND PUT IT ON K9" 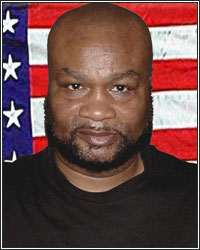 "We have a perfect camp, he is listening, and we just gonna go down to Detroit and put it on K9 in front of all of his peoplehere is a guy that worked hard and they took a few fights from him and he always seemed to bounce back from certain situations. But this time, with the help of Floyd Mayweather and Leonard Ellerbe, I mean, they put this kid back to the pinnacle of the game, which is to win a world title, and he's on the door to doing that and we're getting ready to knock the door down right now," stated world-class trainer Eddie Mustafa Muhammad, who talked about Ishe Smith's upcoming clash with champion Cornelius "K9" Bundrage, reuniting with Chad Dawson, and much more. Check it out!

EMM: Everything is going perfect. Like I said, I have just been watching these great games in the NFL playoffs and ready for the Superbowl!

PC: February 23rd is right around the corner. Ishe Smith will be challenging K9 Bundrage for the IBF title. How is training going with him?

EMM: Everything is going great. We have a perfect camp, he is listening, and we just gonna go down to Detroit and put it on K9 in front of all of his people.

PC: You have been with Ishe off and on for a long time. He has come up on the short end of the stick on a few occasions. What would it mean for you to see him capture this title and get his just due?

EMM: To me and my personal experience, I would be glad for him to get that title because here is a guy that worked hard and they took a few fights from him and he always seemed to bounce back from certain situations. But this time, with the help of Floyd Mayweather and Leonard Ellerbe, I mean, they put this kid back to the pinnacle of the game, which is to win a world title, and he's on the door to doing that and we're getting ready to knock the door down right now.

PC: Badou Jack is another young fighter in your stable. He is back in Vegas working with you after being in Sweden for a little while. Any update on his next fight?

EMM: Badou is scheduled to fight on the 2nd of February at the Cosmo. He has been training hard and working hard and putting everything together.

PC: Was there a process to getting back accustomed with one another, because he was in Sweden for quite some time, or were you guys able to pick up where you left off?

EMM: He didn't forget what I showed him because we kept in touch by phone. The only thing that was lacking when he got over here was he had to get back in condition because of the jet lag. He is over that now and we are right back where we left off at. We fixed that with a few visits to Mt. Charleston and now we are right back on the playing field.

PC: Speaking of picking up where you left off or re-adjusting, you are now working with Chad Dawson again and it's been some time in between fights for you guys. How did you reunite and what it is like in the gym?

EMM: The chemistry was always there. I never had any animosity towards Chad Dawson because here is a guy who helped me put my daughter through college and paved the way. So I mean, he thought that he needed a change and I wasn't angry at all, but see, I know what type of trainer I am and the type of trainer I am suits his style just right.

PC: I have received a lot of emails about Chad saying he isn't loyal to any trainer and so forth and so on. Do you see him as a young man who is just trying to find his way in the sport or do you think it's something else?

EMM: I couldn't tell you, but like I said, we got together about a month ago, his family and my family, here in Vegas and we sat down and believe me, it's like we never left each other. Our families, as soon as they saw each other, they started hugging. His kids and my kids and his wife and my wife hit it off like we never left. Like I said, I have no animosity because I know what I bring to the table. I'm not knocking the guy that he's been with. I just know that I had more success and better success with Chad than any of his trainers.

PC: He's back fighting at 175. Would you have liked a little more time with him again or are you okay with the Jean Pascal fight taking place on May 25th?

EMM: No, we are scheduled to fight Pascal on May 25th and we have already been in the gym. As a matter of fact, we have already started boxing about 2 weeks ago. We are right back where we left off at.

PC: I know that loss to Pascal didn't sit well with you. Is this the fight you wanted once you and Chad reunited?

EMM: Oh, without a doubt, because if you can remember, Pascal was leading on the cards and Chad hit him with a left uppercut right on the chin and Pascal was out. And what he did, and I'm not saying it was intentional, but he rammed his head into Chad's eye and he sustained a deep cut and they stopped it, but we had him out cold, so what we gonna do is pick up from round 11 and we're going to show Pascal what he's in for. What Pascal doesn't know is I have a lot of people in Las Vegas and I know he just left Vegas and he was out at all the clubs, doing all the drinking and all that. Believe me, I had guys that was hanging out with him, so I know what he's been doing and where he's been at and who he came down here with. Listen, you can't come into this town and I don't know that you're in this town. I know what you're doing because I got people hanging out with you. It's cool. Let him do what he's gotta do. I don't care if the fight is in Montreal; it's better for us, but I know it will be a different scenario. He was overweight for his last fight and a lot of people don't know that. He paid his opponent a couple of thousand dollars extra. He was overweight and he looked sluggish, but at the end of the day, I'm preparing Chad for the best Pascal.

PC: Zab Judah is a guy that you have worked with in the past. He is facing Danny Garcia next month. A lot of people say Zab has 9 lives and he has to be on at least 8. How do you see this fight going?

EMM: It's gonna be a good fight. I don't have any animosity towards Zab. I wish him all of the luck in the world. Me and Zab's father grew up together, so I couldn't wish him nothing but luck. That fight is in Brooklyn, our hometown, and the entire city of Brooklyn is gonna be there to give Zab support, but at the end of the day, he is fighting a young, strong, and hard punching champion that doesn't know how to lose.

EMM: I wrote a piece on Facebook just thanking him for everything that he done in my career and my well-being. He extended his arms out to me when I came to his camp to train for a world title fight. I mean, everything I needed, he told me it was my camp and I do what I had to do there. We had a lot of talks together after training and a lot of sparring sessions together. I owe winning that championship to him because he helped me a whole lot.

PC: I spoke with someone who was talking about how big you were for a light heavyweight, and meeting you now, you are a big man. It's hard to imagine you made 175. How did you do it?

EMM: Well, I always gave myself a good hard 8 weeks in training camp and that's how I was able to make the weight. It was hard, don't get me wrong, but if I allowed myself 8 weeks, then it was not a problem. And I was big and strong, and you gotta realize one thing, the weigh-in was the day of the fight. I wish the weigh-in was the day before back then. I would probably still be the champion right now (laughing). I started my career at 147 pounds.

PC: I can't even imagine that with your height and structure. Man, I always appreciate your time. I will let you enjoy the rest of your day my man.