JEFF MAYWEATHER: "FLOYD DID THE RIGHT THING BY CHOOSING MAIDANA...KHAN HAS DONE NOTHING TO EVEN BE IN A TITLE FIGHT" 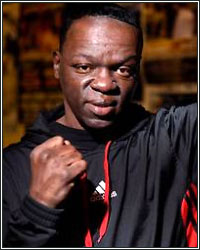 "I think if Broner makes adjustments, he may be able to beat Maidana a second time. But of course right now, that fight is not gonna happen right away because Floyd chose Maidana. I think Floyd did the right thing by choosing Maidana as opposed to choosing Amir Khan because Amir Khan has done nothing to even be in a title fight," stated world-class trainer Jeff Mayweather, who gave us an update on his health, the fighters he's working with, and much more. Check it out!

PC: How are you doing health-wise, Jeff?

JM: It's getting better. I'm still a long way from being back to where I was, but I'm taking it one day at a time.

PC: You are definitely a lot smaller than you used to be. Do you still not have an appetite or is it just from the initial weight loss you had?

JM: I lost 33 pounds in one week. I'm slowly trying to get some of that back. I really don't have to get all of my weight back. I was probably a little heavier than I should have been. I was at about 167, which was fine with me and I felt good with that weight on me, but at the same time, I think it may have been a little too much. I think if I get back up to at least 150, I'll be fine.

PC: And you are back working with your fighters. I saw you in King Mo's corner for his fight against Mikhail Zayats. What did you think of his performance and how did it feel to be back?

JM: I mean, it felt good to be back. As far as his performance, I think, to be honest, that's the toughest guy Mo has faced since he's been in Bellator. I think he's even tougher than Newton. I think Zayats is better than Newton. I think Mo fought like he was supposed to. He took the guy down. The mat was kind of slippery, so that was tough on both guys; especially for Mo when Mo was trying to load up on his right hand. He could never land it. Zayats had a lot to do with that too. But the guy was getting the best of Mo in the standup, so Mo reverted to what he knew and he took the guy down and I think that's what gave us the win.

PC: Not just Mo, but all of your fighters, how does it feel to be back in the gym working with your guys?

JM: It feels great, man, to be back working. I can't work as hard as I used to. I used to have 15 to 17 fighters at one time. Of course I had to cut back on that. But I am getting stronger and feeling better about it. I picked up a couple of more fighters too. I might be training Elio Rojas. I think he fought for the title twice already. He reached out to me and wants to train with me. And also I have been reached out to train I guess the only champion ever from China. So I guess I'm gonna be training him for his next fight. And I also have another fighter, she is trying to make the 2016 Olympic Team. She fights at 152 and she's 6' tall. I seen videos of her and it looks like she has some skills. She has some fast hands, so I'm gonna try to add to what she already has and see if she can make the Olympic Team.

PC: Is there any difference in you training a pro as opposed to an amateur?

JM: I pretty much stick to the same routine. To me, if you choose boxing and if you are good at it, eventually you gonna be a pro anyway, and not only that, I think the amateur system now is more catered to the pro system as well, so you really are preparing to become a pro anyway. I think it's to the point where they are fighting without head gear and they are supposed to go to the 10-point must system, so that's basically pro boxing.

PC: We haven't spoke in awhile, but I like the encouraging message you put on your Facebook after Adrien Broner's first loss. You basically said when these guys lose, that doesn't mean they are not talented; it just means they have to go back to the drawing board. And I agree with that.

JM: Right! I think the one thing that Adrien Broner...I mean, I seen a lot of flaws, and that's not necessarily pointing the finger at anyone. I think that there are some things that Maidana was doing that was kind of tricky. He would fake a shot to the body, but he would come over the top kind of like Erik Morales used to do. And it worked every time on Broner. So Broner did a lot of reaching and he thought they were coming to the body and they didn't because they were going somewhere else. That was one of the problems, and then another problem I think with Broner is that, at 135 pounds, he was able to walk everybody down. He still has that mentality, but he's not gonna be able to survive at welterweight with that mentality when you got guys that can punch harder than you. If you fighting somebody that can punch harder than you, you have to learn to use your legs. And that's the problem that he's gonna face fighting up there. I still thought he fought a gallant fight. I thought he dug down and showed he still has the heart of a winner; he just couldn't pull it off. I still take my hat off to him because he still showed a lot of heart, but it's one of those things that when you talk as much as he do, you gonna get some backlash and that's the one thing he's gotta be able to deal with. If you're gonna put it out there, you gotta be able to deal with it when it comes back in a different way. So hopefully his skin is thick because it's gonna have to be. It's so crazy now. I was looking on Instagram and anything this kid do, people are criticizing him now. He can't say he's doing anything anymore. He was on there having a vacation with his woman and people were like, "You need to be in the gym; you need to be doing this and that," and I'm like, "Wow! The man can't take a vacation; he just coming off of a fight." But that's the backlash of when you put it out there, you gotta be able to handle what's coming back. And I think if Broner makes adjustments, he may be able to beat Maidana a second time. But of course right now, that fight is not gonna happen right away because Floyd chose Maidana. I think Floyd did the right thing by choosing Maidana as opposed to choosing Amir Khan because Amir Khan has done nothing to even be in a title fight.

PC: I always enjoy our talks my man and I hope the best for you and your fighters. Is there anything else you want to add before I let you go?

JM: Not really, other than have people check out my website, www.proboxinginsider.com. I think we are growing and doing real well now, and also, anybody that is a fan of mine or a fan of my fighters, hopefully they will tune-in when we get a chance to be on TV and be televised and continue to support us.