DIAMOND DALLAS PAGE: "KING MO IS DOING DDP YOGA AND I KNOW IT IS HELPING...THAT EXTRA LITTLE PUSH TO TAKE OUT RAMPAGE" 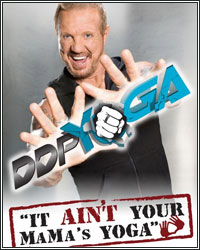 "King Mo is doing DDP Yoga and I know it is helping him with his knee and his back and I'm hoping that it's giving him that extra little push to take out RampageÂ…90% of MMA fighters in their prime right now can't do what I'm doing at 57 years young. That's a bold statement, but it's a fact," stated former professional wrestling superstar Diamond Dallas Page, who talked about how his DDP Yoga workouts have helped MMA fighters like King Mo and Michael Chandler with their upcoming bouts this Saturday. Check it out!

PC: King Mo is someone who raved to me about how good your system works. He's a big time advocate for DDP Yoga. Is there a certain athlete or sport that you would like to work with?

DDP: Well, you know, King Mo, I'm gonna be at his fight on the 17th just outside of Memphis. King Mo is doing DDP Yoga and I know it is helping him with his knee and his back and I'm hoping that it's giving him that extra little push to take out Rampage because Rampage, as you know, is another great fighter. I'm looking for a really great fight between those two guys. I love their talking shit egos too. Both of those guys love wrestling too, which I think is pretty cool. But Michael Chandler is also someone who has been using the DDP Yoga and it's unfortunate that we won't see the third fight to possibly the two greatest fights in the last decade in MMA. Alvarez/Chandler is definitely in the top 10, but unfortunately Alvarez had to pull out with a head injury. But their first fight and then their second fight, holy shit. Mike is my boy and I'm glad to see he will still be fighting. I'm breaking into that MMA world. I have sports entertainment. Where I'm looking to go right now is the NFL, NBA and boxing. And again, this was not a program developed for weight loss. It was developed to heal my body. So if you are an athlete and you are getting your big shot at the show, whether it be the NFL, MLB or NBA, World Soccer League or whatever, the number one thing that takes out athletes is injuries. When you get taken out by injury, that just affected your pay scale and your mindset really badly. If you're doing something like DDP Yoga and DDP Yoga is a part of your tool box so to speak, well the odds of you getting injured just dropped by a minimum of 50%. And I know from my own experience and how my body heals back, and again, I'm 23 months from 60. I'm a man that's been really hard to put away. I wrestled from 35 to 49. If you want to see what I can do, go to www.ddpyoga.com and you will see DDP Yoga in the news on the right side. Run your mouse over that and once you run your mouse over that, it will light up DDP at 57 years young. Look at the stuff that I'm doing at 57. It will blow your mind. 90% of MMA fighters in their prime right now can't do what I'm doing at 57 years young. That's a bold statement, but it's a fact. You know what a Superhero pushup is, right?

DDP: When you go to the website and you run over the DDP in the news and get to DDP at 57 years young, you will see me do 50 Superhero pushups. That's what DDP Yoga brings. It's a kick ass cardiovascular workout that will dramatically increase your flexibility by breaking up scar tissue. When you break up the scar tissue, that's what alleviates the pain. It also strengthens your core like never before with minimum joint impact. Even if you just want to do one workout, it's great to have in your toolbox. You can go to www.ddpyoga.com and see the deals we have going on right now, but before you do that, don't listen to a word I said. Go to our Facebook page and our Twitter page and just see what people are saying about the program and you will be like, "Wow, this shit is for real," because it is.