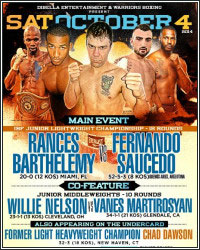 IBF Junior Lightweight champion Rances Barthelemy (21-0, 12KOs) put on a dominant, albeit uneventful, performance against seasoned veteran Fernando David Saucedo (52-6, 8KOs) as he won every round in the eyes of all three judges with scores of 120-108 across the board.

Barthelemey's first title defense was a successful one, and while it wasn't a thrilling affair, his skill set really showed in the fight as he was seldom hit and offensively was able to do what he wanted. Saucedo did his best to try to bring the fight to Barthelemy, but he was simply outclassed.

From the onset, Barthelemy worked behind his jab as he peppered Saucedo and struck whenever he saw openings. Saucedo played it safe early as he moved and tried to evade Barthelemy, but as the fight went on, his plans changed and he tried to attack the champion.

Whenever Saucedo would decide to let his hands go, Barthelemy used his defense to evade the attack and would then counter and make Saucedo pay for his mistakes. In round 5, Saucedo was caught with a huge left hook as he was momentarily hurt and was fortunate the round ended before Barthelemy could inflict more damage.

The fight continued the same pattern with Bathemely being in full control and Saucedo trying his best to get inside on the crafty Cuban. Barthemely's defense was almost as impressive as his offense as his glove stayed glued to the side of his face and he was able to move out of the way of Saucedo's punches.

After dominating the fight for 12 rounds, Barthelemy added the 21st victory to his undefeated record and will now look to take on the rest of the big names of his division.

Even with heavy hearts due to the passing of promoter Dan Goossen, Vanes Martirosyan (35-1, 21KOs) and trainer Joe Goossen went into Foxwoods and took care of business as they beat Willie Nelson (23-2, 13KOs) with an impressive performance via unanimous decision with scores of 96-94 and 97-93 twice.

The action was constant as both fighters took turns throwing and landing their best shots. It wouldn't take long for Martirosyan to respond as in the second round, he landed a big right hand that buckled Nelson's legs. Vanes would follow up with a barrage of punches and prove his power was to be respected.

In the 4th round, Martirosyan managed to hurt Nelson again and his offense was more fluid and he was punching in combination. Nelson continued to work off his long jab, but Vanes was able to get inside and unload his combinations, which proved to be the difference throughout the bout.

The styles of both fighters blended perfectly, which produced an action-filled fight. Neither fighter let up, but as the fight went on, it was Martirosyan who began to take control landing his power punches. Martirosyan has been criticized for not going for broke in previous fights, but he made sure he put his foot on the gas as he finished strong the last 3 rounds. He found a consistent home for his big right hand as he began looping it around Nelson's guard.

After 10 fun rounds, it was Martirosyan who added an impressive victory and dedicated his win to the late Dan Goossen. Martirosyan will continue his quest to become champion in the Junior Middleweight division while Nelson will need to regroup.

Chad Dawson's homecoming to Connecticut after 5 years was a rough one as his career took another major blow after Tommy Karpency (24-4, 14KOs) scored a shocking split decision victory with scores of 96-94 twice for Karpnecy and 96-94 for Dawson.  Dawson (32-4, 18KOs) did not agree with the decision as he felt he still did enough to win despite fighting with one arm for a good part of the fight after injuring his left shoulder.

It was a close affair as neither fighter ever took control of the fight. Dawson used his jab early as things started off slow, but in the 3rd round, Karpency began to fight with more confidence as he caught Dawson with a hard counter right hook.

Dawson was never able to get his offense on track as his timing looked off and Karpency was doing a good job of countering Dawson whenever he tried to come forward. By the 7th round, it was apparent something was wrong with Dawson's left hand as he did not throw it and simply fought with only his jab.

Despite Dawson's disadvantage, Karpency never took advantage of it as he remained fighting at the same pace. After 10 uneventful rounds, the judges awarded Karpency an upset victory.

Dawson was extremely upset after the fight when he spoke to Showtime's Steve Farhood.

While Karpency scored the biggest victory of his career, Dawson's comeback has been derailed and will be interesting where he goes from here.