DEMARCUS CORLEY: "I WOULD 100% LOVE TO FIGHT MICKEY BEY" 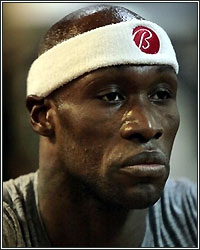 " I want a champion in this lightweight division at 135, and possibly I would go down to super featherweight at 130. I can make 130 and be strong. I weighed in at 132.8 pounds for this fight. I think 140 is out of my range. I fought at that weight class for 17 years and I was successful doing it, but I knew where I should have been at the beginning of my career in 1995. I would 100 % love to fight Mickey Bey. I know he's with Mayweather Promotions and hopefully for him, Floyd keeps him away from me, which he probably will do," stated former jr. welterweight champion Demarcus Corley, who talked about his recent victory over Daniel Attah, his future plans, and much more. Check it out!

PC: Congrats on the recent win over Daniel Attah and the recent success you have been having. How do you feel?

DC: It's really not how I feel, but how I'm able to do it pretty much. God has blessed me with tremendous health. And me going through the trials and tribulations with my family, losing my mom 3 months ago, I'm blessed.

PC: Was it ever a thought not to go through with the fight after losing your mom?

DC: We were scheduled to fight on September 20th before I fought in August. We had already negotiated the fight. I talked to a promoter down in Tampa and he said he had a fight already lined up in August and if I would be interested. So I was already training for a fight that's coming up in September and this was the end of July. I said I can kill two birds in one stone. I had just lost my mom at the end of May and it was just me going through... I would say depression because she passed May 29th, my birthday was June 3rd, and we buried her June 5th. I just didn't want to stay confined in the house, so I wanted to go to the gym and train and that was my outlet, me being in training letting off some steam sparring, but it was hard. I went to camp in California to work with Lomachenko for the Gary Russell fight. I got a chance to work with this young fighter, someone who had won the Gold medal 3 times, and I mean, to see his performance in the ring with me, and I was probably 138 pounds to 140 when I was boxing with him; he was very strong, so I knew the outcome of that fight before it happened. But throughout the time we did box, my nose bled every time we sparred. He would just touch me and my nose would start bleeding, so I knew I was dealing with stress from the situation of losing my mom. So I continued to press and push forward and stay focused.

PC: What are your overall thoughts on Vasyl Lomachenko?

DC: Oh, he's going to be around for awhile. He's going to be the undisputed champion. I don't see no one beating Lomachenko right now at the weight class that he's fighting at. He's just a phenomenal all-around fighter and he's very strong.

PC: You're fighting at a lower weight class, 135, than you were when you were younger. At the age of 40, how do you stay in such great shape like you do?

PC: Do you feel like your experience and the fact that you have been in the ring with everyone will separate you from some of these younger fighters?

DC: Definitely my experience and my work ethic. My age, me being much older than these younger fighters, I have to think my experience would play a big part in it.

PC: When I spoke to Bernard Hopkins before his last fight, I asked him what did he feel he did differently at an advanced age as opposed to when he was younger. His answer somewhat shocked me because he said now that he's older, he knows he doesn't have to do so much in training. Is that the approach you have taken; still train hard, but less and smarter?

PC: Talk us through the fight with Attah a little bit. What do you feel you were able to do in that fight to offset what he was trying to do?

DC: I was really ready for that fight. The game plan, I wanted to get the knockout in 3 rounds because my last fight, I got the knockout in 2 rounds and I didn't get the chance to really display anything. So I wanted to get 3 rounds and then the knockout, but after the first 3 rounds, I saw that Daniel was a very strong and durable fighter, so after the 3 rounds were over with, I said, okay, I'm just gonna beat this guy convincingly. I wanted to punish him, knock him down, and try to make him quit on the stool. Leading up to all the rounds I was punishing him and beating him and he wanted to quit, but he still had that veteran determination of, I just can't let him knock me out. And I thought the ref would jump in there and stop him at times when I was countering him and hitting him, but the ref was a veteran referee and he seen that Daniel can still take more punishment, so he let the fight continue.

PC: Are there any names in particular you are targeting?

DC: I want a champion in this lightweight division at 135, and possibly I would go down to super featherweight at 130. I can make 130 and be strong. I weighed in at 132.8 pounds for this fight. I think 140 is out of my range. I fought at that weight class for 17 years and I was successful doing it, but I knew where I should have been at the beginning of my career in 1995. I would 100 % love to fight Mickey Bey. I know he's with Mayweather Promotions and hopefully for him, Floyd keeps him away from me, which he probably will do, but I will be back out in Vegas this week to start training for my next fight. Omar Figueroa, who is with Golden Boy, I'm trying to get that fight, but I don't think Al Haymon is gonna match his prospect against a veteran like me. They are protecting him. Terence Crawford, he's got a fight coming up; that would be a great fight for me. I would like to unify before I fight Terence Crawford. I would like to grab a title so that we can have two belts on the line if I was to fight him for his title. I would want the stage to be higher to fight Crawford. I like his style and the way he fights. And Richard Abril, he's just holding on to a title by the hairs on his chin. He don't even deserve the title. He can't fight, so whoever has him, we would love to fight him also.

PC: How did you hook up with Jeff Mayweather and have him become your trainer?

DC: I've been trying to get out to Vegas for a couple of months. I reached out to him on Facebook and he replied back. I told him I had a fight scheduled coming up and he told me to come on out to Vegas and he would love to work with me. He remembered when I was out there working with his brother, Roger, back in '06. He said he had always admired my work and dedication. He told me to come out, I got a chance to get out there, and we got established and we just started working. He seen how I was coming to the gym and maintaining my weight, I was 137 pounds 3 to 4 weeks before the fight, so he was like, "You're strong. You're not gonna have no problem with these guys at lightweight." He felt like I would beat all of them guys because they were sucking down to make weight and I was already at weight.

PC: I appreciate your time and wish you the best, man. Seems like you're going to be around for awhile, so best of luck on your journey. Is there anything you want to add before I let you go?

DC: I just appreciate all the support that FightHype has given me. I'm looking forward to doing more interviews with y'all!