KEITH THURMAN WANTS TO "DESTROY" FLOYD MAYWEATHER: "2015, WE GETTING READY TO BURN MONEY" 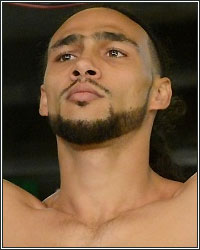 "That's right, baby. You know, Floyd is supposed to be TBE and I want to fight the best. I want to fight the man. It ain't like Floyd's going to knock me out. When has Floyd knocked anybody out in the past several years? Huh? So if anybody should be scared, it should be him," stated undefeated interim WBA welterweight champion Keith Thurman, who stated his case for a mega-fight with undefeated pound-for-pound king Floyd "Money" Mayweather shortly after the weigh-in for his upcoming clash this Saturday with Leonard Bundu. Thurman wasn't shy about letting his intentions for the new year be known.

"If anything I'm gonna do, I'ma get a great learning experience in my career, and to be honest, I'm looking forward to destroying Mr. Floyd 'Money' Mayweather. I have a motto. This is my personal motto. It's called, 'Burn Money'. Burn Money! 2015, we getting ready to burn Money," Thurman continued. Before he can get a shot at Mayweather, however, Thurman will have to take care of business against Bundu on Saturday. It's a task that he's confident he'll be able to accomplish before the final bell rings. "You guys are watching two undefeated fighters at a world-class level going at it, so you should expect a terrific fight. It's gonna be a great test for me in my career, but I'm looking forward to it. We've had a hard training camp and you know my motto, KO's for life, baby. It ain't going the whole 12 rounds," he added.