BRYANT PERRELLA: "I WANT TO BE THE BEST BOXER...BUT I HAPPEN TO HAVE THAT POWER" 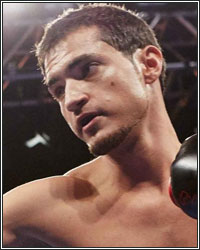 "Boxing comes first to me. I want to be the best boxer, hands down, but I happen to have that power and have that strength. But I separate it. I understand that I hold these weapons, but I'm not trying to go out there and abuse them. I'm not...I'm not trying to knock everybody out and tee off on them," stated fast-rising welterweight Bryant Perrella, who talked about his latest win, his future plans, and more. Check it out!

PC: Congratulations on your last win back in January. How did you feel about your performance?

BP: Thank you very much. I felt great. The fight pretty much went as planned. I knew I was fighting a guy that had more experience than me, but at the end of the day, he never experienced fighting me. I went in there and broke him down and I ended up getting him to quit on the stool after the second round. I thought it would go a little bit longer because I knew he was a tough, durable guy, but I got him out of there early and it was a great night of boxing.

PC: It appeared like everything you were trying worked. You were switching it up, you hit him with combinations, and you cut the ring off well. Was that everything that you worked on in preparation for this fight?

BP: Yeah man! We work on everything for every single situation. We feel that a lot of guys are going to try and get on the inside because they figure I'm tall and I have a long reach. We figure they are going to try and get on the inside, so we work a lot of inside game, so once they get in there, they not going to like it. So then they end up backing up. So we just work every aspect of the game; that way, there are no weaknesses. We try to cover all the gaps and close all the holes to be a completely well-rounded fighter.

PC: Was there anything about Ayala that surprised you during the course of the fight?

BP: Not at all, man. I figured he was going to try and come hard at first, but once he got tagged a few times, he was going to start changing his mind and backing up and I was just going to continue to put the pressure on him and break him down. I wanted to mentally, physically, and spiritually break him to the point where he just goes down or quits and that's pretty much what happened. It went exactly how we planned or how I envisioned it happening.

PC: Your record states you are 13-0 with 12 knockouts and when someone sees that, they obviously will look at you as a puncher first, but watching you fight, I think you are more of a boxer that has good power and you get good leverage on your shots. How do you see yourself?

BP: Boxing comes first to me. I want to be the best boxer, hands down, but I happen to have that power and have that strength. But I separate it. I understand that I hold these weapons, but I'm not trying to go out there and abuse them. I'm not...I'm not trying to knock everybody out and tee off on them. This is boxing and I feel like, if I'm the superior boxer every time I step in that ring, they are not necessarily have a chance to do anything because I know I have the power advantage as well. That leaves out any gaps and weaknesses and that's what helps me become a well-rounded fighter.

PC: You fought 5 times in 2015. That's a very busy year by today's standards, even for a prospect. Are you looking for that same work rate this year?

BP: I want to stay busy and active this year as well because if I don't, I go crazy. I gotta be fighting. I gotta be training. Even when I become champion, I'm going to be doing the same thing. I'm going to be fighting 4 times a year because I want to continue to get better. I have a broad vision for this. It's not just about getting the belt and chilling and not training and being inactive. I want to stay busy and stay active because this is what I love to do. My goal for this year is to be the "Prospect of the Year!" That's my goal and that's what I'm going to get.

PC: You are a tall, rangy southpaw and that's usually not the ingredients to having a lot of guys want to fight you. Do you ever look ahead and think, it's going to be difficult to get you opponents or are you going through that now?

BP: Man, its hard now. It's very hard right now. What people don't understand people say I should step up my game or fight tougher guys. We have like 4 or 5 different opponents back down or fall out every single fight. They end up finding a guy a week or two before the fight and that's not my fault. They offer champions, prospectswhatever name they bring to the table, we're going to say, "Yes!" We don't care. That's not my job. My job is to train and execute against whoever they put in front of us. They give me the name, they give me the date, boom, that's it. It just so happens these guys fall out, they change their mind, or just say, "Hell no!" Whatever the situation may be, there is nothing I can do, but they will find somebody (laughing).

PC: And that's a difficult position for the other side as well because you really don't know what to prepare for and I guess you just have to work on being the best you and be prepared for anything.

BP: Yeah! Before, I used to want to have specific sparring for the name that we have at the time, but then they will pull out and I will be like, "Damn, I should have been sparring whoever." So now when they give me a name, I don't really put too much thought into it; maybe a little bit, but really, I have a very broad spectrum of the way I train. I basically train for anybody; southpaw, right-hander, tall, short, it really doesn't matter. Every day, training is just for anybody. I'm not really worried about the style of my opponents or anything like that. They gotta worry about me. I'm going to adapt and adjust to what they are doing anyway, but I'm going out there to do me. They have to worry about what I bring to the table, so at the end of the day, it doesn't even matter.

PC: You have been at welterweight for a long time. Is that still a comfortable weight for you even with your height?

BP: Yeah man, I make weight fairly easy even though I'm a big welterweight. I used to fight at junior middleweight and I even fought at middleweight once. But since I got with Al Haymon, I've been fighting at welterweight and I'm doing great at this weight class. I feel stronger and more superior than anybody I have been in the ring with. So this is a great weight for me and I will be here for awhile and go from there.

PC: I look forward to seeing you back in there. Best of luck this year and keep me posted on your next move. Is there anything else you would like to say before I let you go?