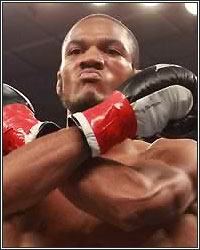 Undefeated super welterweight contender Julian "J-Rock" Williams and once-beaten Italian Marcello Matano will square off in a 12-round IBF eliminator for the No. 1 ranking at 154-pounds in the main event of SHOWTIME BOXING: SPECIAL EDITION on Saturday, March 5, live on SHOWTIME (10 p.m. ET/PT) from Sands Bethlehem Events Center in Bethlehem, Pa.

"This upcoming fight will be the biggest fight of my career," Williams said. "I'm chomping at the bit to get back out there. I am taking my opponent very seriously and I refuse to let Marcello Matano stop me from being a world champion."

"This is a dream come true," said Matano. "I've been working for my whole life for a real opportunity to make to the top level and I will not let Julian Williams take it away. What will happen when Williams has to go to the championship rounds? Will he be ready? I know for sure that I will. This is the opportunity of a lifetime and I will do all I can to grab it."

"Facing a former world champion like Sam Soliman is a great opportunity for me," Douglas said. "The plan has always been to keep moving forward, and to do it successfully.  This is that next step, and I'm ready for it.  I've grown and learned so much fighting on ShoBox and it's a beautiful thing to continue to progress and move to the next level."

"This is an important fight for me," said Soliman. "I had three opportunities on the table and I chose Douglas believing it to be a better fight for ranking, and it's a challenge I'm excited to take on. From what I have seen, Douglas is a very talented fighter, which will make for a good fight. I am in great shape and looking forward to fight night."

"I'm excited and eager to showcase my abilities to the world again," said Harrison. "I'd advise fans to arrive early because I don't plan to be in the ring long. I'm knocking this guy out. I know Guerrero is coming in with a chip on his shoulder and I can't overlook him. I brought my uncle into camp and I think that's going to give me the edge that I've needed to get over the hump. I'm putting the whole division on notice!"

"It's warrior time," said Guerrero. "We are going to have a war. This is going to be non-stop action. This fight will lead to big things for me. I'm used to fighting guys that are bigger than I am. I'm at my more natural weight and I'm looking to do great things in this division."

"I'm thrilled to promote this great show on March 5," said Marshall Kauffman of King's Promotions. "This is a great card from top to bottom with some future champions looking to show the world that they are ready for the next level. I am honored to have Julian Williams headline this card. He put on an explosive performance in his last bout at the Sands and I am sure he will be looking to do the same on March 5."

Tickets for the live event, which is promoted by King's Promotions, are priced at $100, $75 and $45, not including applicable service charges and taxes and are on sale now. Tickets are available HERE at www.ticketmaster.com. To charge by phone call Ticketmaster at (800) 745-3000.

One of the most promising and highly regarded young stars in boxing, Williams (21-0-1, 1 ND, 13 KOs) will headline for the first time on SHOWTIME. He's stepping up after honing his skills and steadily ascending the ranks after five fights on SHO EXTREME.  The 25-year-old shut out longtime contender Joey Hernandez last April, followed that with a sixth-round stoppage of Arman Ovsepyan in June and closed the year by stopping Orlando Lora in the first round in September. The Philadelphian has also picked up victories over Joachim Alcine, Eliezer Gonzalez and Freddy Hernandez in his young career and looks to earn his first title shot with a win on March 5.

Matano (16-1, 5 KOs) is a former Italian super welterweight titlist.  He's registered four consecutive wins since the only loss of his career, including victories in three scheduled 12-round fights.  The 29-year-old is coming off a 12-round unanimous decision over fellow-Italian Nick Klappert in October 2015.  Like Williams, he fought three bouts in 2015, although he logged 31 total rounds compared to just 17 for Williams.

Douglas (19-0-1, 13 KOs) has been impressive in five consecutive victories since he boxed to a draw when he was just 21 years old with former world title challenger Michel Soro in July 2014.  The former top amateur has won his last three fights by knockout, including a sixth-round KO of previously undefeated Thomas LaManna and a fourth-round TKO of veteran Les Sherrington last November in his fifth appearance on ShoBox: The New Generation. On the prospect developmental series, the 23-year-old Douglas has graduated from unproven prospect to undefeated contender and is now ranked No. 4 in the WBO and No. 6 in the WBA. Douglas is promoted by GH3 promotions.

Soliman (44-13, 1 NC, 18 KOs), of Melbourne, Australia, is vastly more experienced than Douglas, having competed in four world championship fights.  The 42-year-old held the IBF Middleweight World title before suffering a debilitating knee injury and losing via decision to Jermain Taylor in his first title defense in October 2014.  Soliman, who is 9-2-1 since 2008, won the IBF crown with a decisive 12-round decision over Felix Sturm in 2014.  The Australian, who fights at a relentless pace and can be awkward at times, will look to bounce back from a close, 10-round split decision loss to Dominic Wade last June on ShoBox.

At just 25-years-old, Harrison (22-1, 18 KOs) has showed tremendous promise as he recorded a 10-fight knockout streak from 2013 to 2015 and proved he could recover from a loss when he dominated Cecil McCalla for 10-rounds in October. The Detroit-native will look to make it back-to-back victories as he continues his ascent towards championship contender status. He has picked up knockout victories over Antwone Smith, Tyrone Brunson, Bronco McKart and Pablo Munguia in the last two years.

A former world title challenger, Guerrero (28-3, 20 KOs) returned to his winning ways in 2015 with victories over Abraham Han and Daniel Souza Santos. The 29-year-old lives and trains out of Los Angeles but grew up in Maryland after being born in the Dominican Republic. The veteran owns victories over Ishe Smith, Derrick Findley and Gabriel Rosado in a pro career that dates back to 2007.