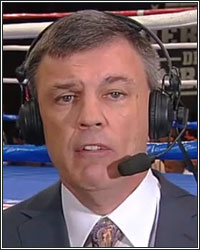 "I have a couple of good ones. A lot of people don't realize Cus [D'Amato] was a mental strategist. He understood realms of the psychology and the psychic realms of a person a little better than I think most people do, and that was Ali. As much as we looked at how much Ali was above everyone else physically, but mentally, he was better than everyone else as well; mentally and psychologically," stated world-class trainer and ESPN commentator Teddy Atlas, who recalled an epic story about boxing icon Muhammad Ali, legendary trainer Cus D'Amato, and civil rights activist Dick Gregory. Check it out!

"He beat a lot of guys mentally before he had to even beat them physically; guys like Foreman. You know, guys where his physical abilities wasn't going to be enough to win. So he had to have the understanding of the psychological terrain and how to use that, and how to get the other guy on the wrong road and he was on the right road psychologically and he knew how to do that. Cus understood those areas better than anyone I knew. I was at the house when Ali would call Cus. He called him before the Foreman fight and he asked, "What do I do with this big man, this bully, this big strong guy that everybody is saying is going to kill me? What do I do with him?" He called Cus up and I was at the house and I answered the phone and Ali was on the other end of the phone asking for Cus. I was just a kid, so it was quite a thing to have Muhammad Ali on the other line. So Cus took me to Deer Lake, Pennsylvania to meet Ali. So we went there and met him and I had just won the Golden Gloves and Cus told him, "This is Teddy Atlas. He just won the 135-pound Golden Gloves." So Ali said, "Oh yeah," so he put his hands up and started slap boxing with me. I was like 18 years old and I have Muhammad Ali slap boxing with me, so I took it serious. I mean, what do you think? It's Muhammad Ali. I had my hands up and my chin down and I started going to work, you know. Ali was throwing some shots and I'm trying to slip over and throw some shots back. And Ali, about 30 seconds into it, says, "Whoa, this boy is very serious. He is very serious, Cus. We gotta slow him down a little bit." And he says, "No more!"

And then he took me where Ali was staying at his hotel for the third Norton fight. I was surprised that he remembered me. It kind of made me feel good. I mean, think about it, to be remembered by Ali as a kid, you couldn't do anything greater; just to be remembered. As a kid, you get impressed by certain things. He had taken over the whole floor of the hotel. He had a whole floor for his entourage. I was like, "Oh my God, who has a whole floor?" I never met anyone in my life who had a whole floor of a hotel. So I turned to Cus and I go, "He's got a whole floor," and Cus said, "Yeah, he does!" So anyway, he goes, "Come here, come here! You want to see something?" Of course I'm like, "Yeah!" So I follow him and at that time, I don't know if you remember and I didn't know much about it at the time because I asked Cus about it afterwards and from what Ali told me, Ali told me and Cus confirmed it and said I had a very good insight to recognize that at that point. He was good at that, as good as he was, as big as he was and as strong as he was, he was very easily told and influenced by people. He really was. He always liked having people around him; it made him feel good. He collected all kinds of different people and he was influenced by all kinds of different voices. At this point in his life, he was hanging out with a guy named Dick Gregory. Dick Gregory was an activist, he was a comedian, and he was also a guy that was into health foods and he was a health freak so to speak; and this was before the days of where they are at now where they make all of these shakes and do nutritional things. It was way before that. I'm going back 30 years. It was before the invention of all of this stuff. Dick Gregory was a little ahead of the curb, so Dick Gregory had his ear. Anyone that talked to him, he was listening. For a guy that was so great in other dimensions, he could be led down certain paths; it was funny.

So Dick Gregory had his ear and he had him into this health food stuff; again, way before this stuff was popular. He says, "Come here! You want to see something?" So I'm following him around and he opens up this door and the whole room is dedicated to nothing but the stuff that Dick Gregory had for him. It was a room full of blenders and boxes and fruits and vegetables and concoctions and nutritional supplements. It was just a whole room and I was mesmerized by this. So I say, "What is this?" He goes, "This man, Dick Gregory, is crazy. He wants me to eat all of this stuff." I'll never forget it; it's with me for life. So he's walking me around and I'm looking at all of this stuff and he says, "He wants me to eat all of this stuff. He puts this stuff in a blender and he wants me to drink it." He says, "You want me to make one for you?" What, are you kidding me? "Yeah!" So he starts throwing stuff in and it's just me and Ali, so you know how special this is. So he's throwing all of this stuff in and I'm just standing there and he puts the lid on it and he's blending it and it's like green and black and it doesn't look great. He pours it into a big plastic cup and he says, "Here, drink this." So I drink it and he's got this look on his face, and you gotta see the look on his face as I'm putting this stuff down (laughing). He was like a big kid and years later, me and Cus talked about that and he said, "Yeah, he is a big kid; always!" But anyway, I will never forget that mischievous look on his face and that smile and he looks at me and he goes, "You like it?" What are you going to say, it's Muhammad Ali, so of course I said, "Yes," and he goes, "Well good, you drink it. I can't stand the stuff (laughing)!" It doesn't matter what was in that cup, I was going to drink it and say I liked it (laughing). That stuck with me."