AMIR KHAN SAYS KELL BROOK GOT EVERYTHING WRONG AGAINST GOLOVKIN: "I JUST THINK HE DID IT FOR THE PAYDAY" 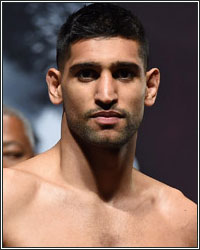 "Triple G was dominating him and he knew that...End of the day, I'm not saying it was a bad choice. I mean, it was nowhere near the Canelo money, what I got, but I mean, I deserve that because I've always fought the top names in boxing. With him, it was, I think, it was just one of those things where it was too much of a step up," stated former world champion Amir Khan, who shared his thoughts on Kell Brook's performance in his loss to Gennady Golovkin. Check it out!

BT: Amir, I know it's been a month since the fight, but I never got a chance to talk to you about it. What did you think of Golovkin's stoppage of Kell Brook?

AK: I think it was an amazing stoppage. The time it was stopped was the best stoppage timing-wise because, ya know bro, another 20 seconds, he could have been hurt badly. That would have been even worse; that would have been really hurtful in his career. Maybe he might never come back. Dominic Ingle, when he did stop it, you know what, he stopped it at such a great time. But at the same time, he still took a bad beating. He was still really hurt. He was out of it. I mean, I think that they got everything wrong, bro. Look, Kell should have used more of the boxing than trying to put aggression on and standing there with Triple G. I heard that he was heavy in training camp. I mean, it'll be good to see what happens with him now, which fight he takes. I just think he did it for the payday, bro.

BT: If he was just doing it for the payday, do you think he went into the fight with a defeatist attitude, already knowing that he was going to lose?

AK: I think mentally, he went into the this fight winning because he knew that I'm making a big paycheck, I've just sold out an arena; well, Triple G really sold the arena, and I'm going to go in there and I know I'm going to get beat. He's a bigger guy. Amir Khan went up a weight and fought Canelo, but Amir Khan was beating Canelo when he got hit with that one shot and he got stopped. Triple G was dominating him and he knew that, but he goes, "Look, I'm just going to go in there." This is what I think, he went in there thinking he was always going to get beat, but he's going to make more money. He made probably 6 times more, 10 times more than what he normally makes fighting a normal bum. Bro, it's true. End of the day, I'm not saying it was a bad choice. I mean, it was nowhere near the Canelo money, what I got, but I mean, I deserve that because I've always fought the top names in boxing. With him, it was, I think, it was just one of those things where it was too much of a step up because he's never really sold out an arena like that in England, he's never fought in front of so many people, and maybe the hype he got, it was his first ever pay-per-view fight, so I think maybe that kind of got to him as well. Well I don't think got to him; he knew that he was in a win-win situation, so it didn't get to him. He just thought, "Look, I've got pay-per-view, the first pay-per-view, I'm making good money, I'm fighting a big name, and I'm going to get big recognition in America and in the UK. And everyone expects me to lose, so what can I lose? What's the worst thing that can happen? Fuck all, people are expecting me to lose anyway."

BT: Is that what you were referring to when you tweeted something like "the towel showed the hype" immediately after the fight?

AK: Yeah, because end of day, his trainer...I mean, the trainers are looking out for the fighter, yes, but at the same time, they thought, okay, fine, it's time now; he's taking a whooping and this is what we can expect, but he's done his fair bit and showed the people that, yeah, you know, he's boxed a few rounds and he's been in the ring with Triple G. We knew he was going to get banged out and get beat up, so yeah, there you go, towels in, stop the fight. Bro, it's a win-win situation for him. Stock's gonna rise after the fight.