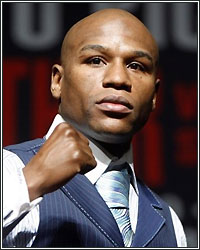 "Floyd's a savvy investor and if he is investing money and getting a rate of return that far exceeds what he has to pay the IRS in interest, then any smart business person is going to take advantage of that deferral...he's just making a financial decision to defer it because it's better for him in the long run...as a seasoned business person, Floyd is acutely aware of what the policies and the procedures of the IRS allow," stated Floyd Mayweather's tax lawyer, Jeffrey Morse, who addressed recent reports regarding Floyd Mayweather requesting a deferral of a 2015 tax liability. Check it out!

BT: Jeff, there's been a few articles written with tidbits of information regarding Floyd's 2015 tax liability, but it's all legalese to me. Can you explain exactly what's going on and kind of put it into terms that a regular guy like me can understand?

JM: Sure. First, Floyd always pays his taxes. Secondly, the Internal Revenue code and the Treasury regulations allow taxpayers to defer their tax liability in certain circumstances. Floyd's a savvy investor and if he is investing money and getting a rate of return that far exceeds what he has to pay the IRS in interest, then any smart business person is going to take advantage of that deferral. So Floyd's looking at this and saying this is a better business decision to just defer my taxes until it's the best time for me to pay it. So we've taken advantage of that. We filed the petition for the whole purpose of allowing Floyd to continue to earn the money that he's earning on his large investments and he'll pay the tax. Again, I would stress that Floyd always pays his tax. He's always working to be 100% tax compliant, but the rules allow us to do certain things and we utilize those rules, just like any other smart investor/tax payor.

If Ben goes and buys a CD at the bank and the CD is earning 2%, but you forfeit all 2% if you cash it in early, well maybe you're going to hold it until maturity, get your investment back plus the 2%, and then pay your tax. I mean, there's good reasons why people do these things. The money is available to pay the tax, but as a prudent investor, Floyd says let me defer that and make more than that on my investment. Again, he'll pay the tax. He's looking for a very short period of time. Everybody's assuming the liquidity event that we're talking about is the fight, but they shouldn't make that assumption.

BT: I know you said Floyd always pays his tax, but people are wondering why he would even have a tax liability from 2015 to begin with. Can you explain why that would be the case?

JM: Floyd always pays his taxes, but he pays it when it makes the most business sense. The government's not prejudiced here because Floyd has plenty of assets. They're not being diminished during this period of time, so if the government's not at risk, then the government can agree to this easily. Listen, we're only talking about 60 to 90 days and then your investments mature and you can cash out without any defaults or prejudice to you. The government gets paid and in the interim, you have plenty of assets to satisfy the debt. From the government's perspective, they don't have to be against it. From Floyd's perspective, he's just doing what makes best business sense, you know. I just watched the trailer of him and McGregor and Floyd says, "For me, it's always about business." That's it. That's the way he looks at his tax obligation. He knows he has a tax obligation and he knows he has to pay it. Like most taxpayers, you know, he wishes that wasn't so onerous, but it is and he pays it and goes on with his life.

BT: I think most people don't really understand all the intricate tax rules and regulations that are available to individuals that have multiple businesses and multiple assets. It seems like this might be something common that's getting blown out proportion because he obviously has a big fight coming up.

JM: (Cutting in) Yes, but I think most people would understand the CD example. But in Floyd's case, he's a smart, prudent investor who's looking at this the way he looks at everything, and that is it's all about business and how can I make the most money.  If the IRS is going to charge me 4% and I can make 12% that period of time, in large sums, that's a big difference, that's a big spread, so why don't I take advantage of that?  As a seasoned business person, Floyd is acutely aware of what the policies and the procedures of the IRS allow and this is just an example of him taking advantage of that knowledge.  Most normal folks do not understand financial engineering or how to manage investments, how to get the best investments, when to sell, and when to buy. All of those things are very complicated and I realize that. I understand. People are questioning, "Is he broke?" (Laughing) He's not broke. Even the IRS is saying, "Listen, this guy's got plenty of assets, substantial assets that he can satisfy the debt." Most of the articles that I read online say that; they all quote the IRS determination.

BT: So just dumbing it down in order to clarify, Floyd doesn't need this McGregor fight in order to get the money to pay his taxes, correct?

JM: That's correct. There's assets available today. If he wanted to pay it, he could pay it today, but again, he's just making a financial decision to defer it because it's better for him in the long run. I've represented Floyd since 2006; that's 11 years. In 11 years, he's never had any liens or levies that are acted upon. We've always had agreements with the IRS on how he's going to pay his tax. We've utilized the rules and regulations that allow us to defer it when it made sense. Sometimes it didn't make sense, so he just paid the tax immediately, but in 11 years, he's always paid his tax. That's why when I see the stories, I think it's kind of interesting that people are even interested in this because it's never been the case that Floyd has never paid his tax. He's always paid.  Some of the articles I read said, "Floyd is asking the IRS to wait for the McGregor fight before he pays his tax." No he's not. That's not what he asked. He has an upcoming liquidity event, which he doesn't need to tell the world about.  We have not tied his tax liability to this fight. If he doesn't fight, he's got plenty of assets to pay the tax. If God forbid the fight didn't happen because somebody got injured or something, he would pay the tax. It's not dependent on the fight.