GREG CORBIN EAGER TO GET INTO THE HEAVYWEIGHT MIX: "I'M JUST WAITING ON MY SHOT...I WANT THE WORLD TO BE TALKING ABOUT ME" 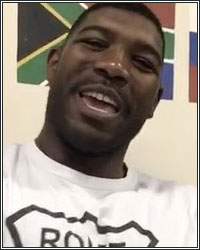 "I believe my size and my strength will do well with the bigger guys with me being a bigger guy myself. I think I should pan out pretty well in the division. I’m just waiting on my shot and when I get it, I plan on letting the world know I’m here for a reason...I’m trying to get my name in that next wave. I want to be in the up-and-coming wave that’s coming up now. I want the world to be talking about me just as much as they are talking about Deontay Wilder, Anthony Joshua, and Dillian Whyte and Tyson Fury," stated up-and-coming heavyweight contender Greg Corbin, who talked abou this future plans and much more. Check it out!

PC: How is everything going?

GC: Man, everything is going pretty good. I appreciate you for doing this for me.

PC: Without a doubt. You are coming off of a win back in August. How do you feel about that performance?

GC: Ah man, I feel wonderful. It went just as expected because I stuck to the game plan and what we worked on in camp. I believed in the system and the system worked out for me.

PC: You are in the land of the giants. Obviously your size and your stature will be an asset for you in today’s heavyweight division.

GC: I believe my size and my strength will do well with the bigger guys with me being a bigger guy myself. I think I should pan out pretty well in the division. I’m just waiting on my shot and when I get it, I plan on letting the world know I’m here for a reason.

PC: I’m not sure if you are aware of the story of fellow heavyweight boxer Amir Mansour, but much like yourself, he did a long bid and he was able to come out and establish a career and is still out there trying to get on.

GC: I know of him. I briefly know of his story, but I don’t know the full details. But me, myself, I had a few trials and tribulations before turning pro, so it was a little setback in my career. But I just pulled my boots up and got my head together and I’m going to give it one more shot. I’m giving it my all and as soon as they let me loose, I’m going to claim what I left behind and try to pick up where I left off. That’s what I did. Around 2012, I came home, I turned pro, and now I’m sitting here at 16-0. I’m just waiting on my shot and keep climbing that ladder until I make it to the top and be one of the greats.

PC: You were a National Golden Glove winner and then it was snatched away from you and you served 7 ½ years in prison. What kept you in the right mind frame and motivated to pursue your boxing career once you were out?

GC: I believed I owed it to a lot of people. I owed it to myself as well because I had invested a lot into my career as an amateur. I can’t call myself a late bloomer, but I started off late. I actually started boxing when I was 8, but it was on my own. I didn’t have my parents consent. My mother was against it. My father didn’t mind, but he wanted me to continue to play baseball. I never competed when I was 8, I just practiced. I was competing in football, basketball, and baseball and I did that all the way through college. When I got out of college, I came back to boxing at the age of 22. That’s when I started competing. I lost my first fight in Nationals in 2003. I went back to Nationals in 2004 and became a runner-up. I lost in the finals. So in 2005, I won the whole thing. Come to find out, George Foreman was the only other super heavyweight in Texas to win a Golden Gloves, so I wanted to come back and see if I could top that by winning two National Golden Gloves in 2006. But in 2005, I ended up getting arrested on a conspiracy charge here in Dallas. But it feels wonderful to have my name in the record books next to a legendary heavyweight like George Foreman. But back to the question you asked, I woke up every day and just stayed busy, man. I kept telling myself not to give up; just be doing something to keep my body active. I can’t say there wasn’t days where I laid in the bunk thinking am I too old or will people take me as a joke. Then I made up my mind, who gives a shit. Just go for it. Don’t let nobody put limitations on what I can do. I’m here and I’m trying to achieve my dream, man.

PC: You are 37 years old and that means time is ticking. What are the keys for you to achieve your goals in what seems to be a very short window?

GC: Being 37, I always believed in never letting anyone put me in a box. I’m a well-preserved 37. But don’t allow yourself to be put into a box. That’s with any sport. Just because you’re a big guy don’t mean you can’t play point guard. Look at some of these point guards these days; they are 6’8". Never let anyone put you in a box. I try to teach that to the world. So by me being a little older than the other guys, I just put that behind me because as long as I put the work in, my body should be able to handle the load. My thing is to just try and stay as busy as I can and I think it will work out.

PC: I understand you are very close to solidifying your next fight. How have preparation been?

GC: It’s been good, man. I been down in Florida working with some of those guys from time to time. We are trying to get the fight finalized right now, but I still been working and doing my road work. I’ve been in the ring with Trevor Bryan, who just won the WBO interim title, Guillermo Jones, and Luis Ortiz. I’m getting great work and I’m growing. I’m growing like a tree and I’m excited to show the world who I am.

PC: What are your short-term goals for boxing?

GC: Well, my short-term goal right now is to get ranked in the top ten of the world, which is not far at all. That is very reachable. And the long-term goal for any boxer is to be a world champion. But right now, for me, it’s to get ranked. I just try to take it one step at a time. I know it’s a process with everything, so right now I need to get in that top ten.

PC: People are excited about the heavyweight division again. What are your thoughts on the landscape of how the division is shaping up?

GC: I feel like my timing is perfect. I’m one of the people who are excited for the heavyweight division. I’m excited for boxing period because it’s making a comeback. The heavyweight division is making a comeback and looking strong. We have a lot of contenders in the division. A lot of names is being thrown around and I’m trying to get my name in that next wave. I want to be in the up-and-coming wave that’s coming up now. I want the world to be talking about me just as much as they are talking about Deontay Wilder, Anthony Joshua, and Dillian Whyte and Tyson Fury. That would be a good feeling to hear your name anytime someone is talking about boxing.

PC: I wish you the best of luck on your journey and I hope you get back everything you feel you left behind. Is there anything else you want to add before I let you go?

GC: Nah man, I just appreciate y'all for having me, man. Thank you very much for doing this interview. I also want to thank my promotional company, Route 30 Promotions. I’m looking forward to some big things with them.