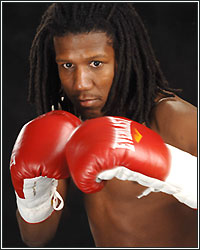 “I am determined to get back on top...I owe John Molina. I want to see him again. I’m ready now. I’m taking boxing 100%...I want to fight 4 tune-ups and that would put me at 27 wins and then I’ll be ready to compete against whoever,” stated comebacking jr. welterweight Dannie Williams, who talked about his recent win, his future plans, and much more. Check it out!

PC: Congratulations on your recent victory. It’s been a long time coming to have you back in the ring. How did you feel?

DW: It was alright. It felt kind of weird, but I couldn’t have asked for a better opportunity, fighting at the crib. Fighting at home in St. Louis, I loved that. Nothing couldn’t be more sweeter than that.

DW: I’m kind of glad I got that type of opponent that pushed me to the limit to get those 6 rounds in. I never seen someone who was out for 6 ½ to 7 years actually come back and fight a 6-rounder. They tried to get me to fight a 4-rounder, but I told them I wanted to fight six. They asked me about an opponent and I told them I didn’t care. I wanted to fight whoever, but I’m glad I got a tough opponent that pushed me. It showed the heart and determination that I have. Overall, I think I did. A lot of people said I did good, but I didn’t feel like that. I’m just getting out. I’ve only been out for 2 ½ months now. It will be a lot better moving forward. I’m glad I did 6 rounds and had a hard fight. It can’t do nothing but go up from there.

PC: Were you able to do any kind of boxing training in prison?

DW: You could just work out. No boxing training. You can’t do none of that because they’ll think you’re trying to get ready for the correctional officers. They don’t let you do none of that, so all you could do is a little cardio. I was at a Level 5 prison where you barely got rec, so we was in the cell doing things. Once I got closer to going home, I got a little more freedom because my level dropped, but yeah, it was alright.

PC: Your last fight prior to this one was in 2013 against John Molina Jr. and then you disappeared. You went to prison for a decent stint. What was it like having to put your career on hold and go do that bid?

DW: I never took boxing 100%. I always played around with boxing. That’s why what happened to me in 2013, I never thought that would happen to me. I didn’t think I would ever get knocked out. I’m glad it happened. I didn’t do nothing but learn from it. I went to prison and did a nice lil' stint and I never want to go back. I learned from it. I did a lot of things in jail to help me be a better person so when I get out, I was determined. That’s why I told myself I was going to fight as soon as I get out. I am determined to get back on top.

DW: I think I can make 35 if I diet and everything. When I got out of prison, I was 167-169 and that’s just from being locked up six plus years without doing nothing. I think I can still campaign at 35. I just gotta bite down. I’ll see how I feel, but I think 35 is possible. I plan on getting 3 or 4 tune-ups and I’ll go from there.

PC: It had to suck to go from your first knockout loss in 2013 to not being to erase it from your mind until 2019 because of the prison time.

DW: Yeah! I always look back and the couple of guys I have lost to should have never beat me. They got 6 or 7 losses and it makes me really mad. I owe John Molina. I want to see him again. I’m ready now. I’m taking boxing 100%.

PC: When can we expect to see you back in there?

DW: I think in June down in Mississippi. I’m just leaving it up to my manager. I’m thinking June. That’s when I want to fight. I want to fight 4 tune-ups and that would put me at 27 wins and then I’ll be ready to compete against whoever.

PC: I think there are pros and cons to being out that long. The pros are you are preserved and I’m sure you learned patience. The cons, obviously ring rust and timing. What did you feel both good and bad while in there?

DW: The bad thing is, like you said, I had a lot of ring rust. I had been gone for so long. The good thing is I don’t have any head trauma. A lot of these guys who have been continuously fighting been pounding on each other, so they are probably a little punchy right now. I haven’t had any head trauma in so long, my mind is focused. I can think in the ring better than they can. And prison didn’t really teach me patience, it taught me discipline. I had to learn discipline. Being in the joint will make you learn that self-control because they control you in there. I had to learn how to control myself. I have learned how to control myself and it taught me self-discipline.

PC: It’s good to have you back. Best of luck on your comeback trail. Is there anything else you want to add?

DW: Stay tuned. I should be back on TV by the end of the year or beginning of next year. If not this year, next year will be my year for sure.