ROXANNE MODAFFERI EAGER TO DO "BEAUTIFUL VIOLENCE" TO TOP TEN OPPONENT; GUNNING FOR ANOTHER TITLE SHOT 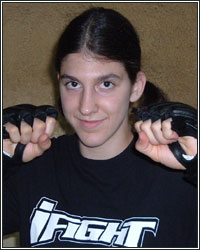 “I have some people that I would like to fight, like I lost to Jennifer Maia in Invicta. I would like to fight her again one day. But the fights right now that makes the most sense for me are the ones that lead me back to the title, so someone in the top ten would be great. I want that title shot again, so I hope the matchmakers will do that for me...I hope I fight again soon so you can see more beautiful violence,” stated UFC flyweight Roxanne Modafferi, who talked about her win over Antonina Shevchenko, her future plans, and much more. Check it out!

PC: Congratulations on your huge upset win over Antonina Shevchenko. How do you feel you performed?

RM: I feel really good about my performance. I was pretty much able to do all of the techniques that I trained to do. Antonina’s clinch is very dangerous and I was able to negate that with my movement and pressure. I was able to take her down against the cage. I worked a sweep that I had been working on in the gym, so yeah, I’m pretty happy.

PC: Did you work on mixing it up in terms of knowing when to clinch, when to stand, and the perfect timing on shooting for takedowns?

RM: Yeah! I worked a lot on distancing, especially, and timing. I think that my key to victory was being able to take it to the ground, but I have decent enough striking as well. That was my plan to use my striking to get in there, but it’s important to be a mixed martial artists. It isn’t a kickboxing match or a Jiu Jitsu match; it’s everything and you need to know everything.

PC: The amount of pressure you applied in that fight, being in shape was imperative. What was the conditioning like preparing for this fight?

RM: I was in really fantastic shape. Stamina has always been my strong point, but my physical trainer, Lorenzo Pavlica, has really worked on my strikes and increasing my power on strikes and I think that really showed in this fight.

PC: Do you feel like your experience and just knowing your way around the cage helped get you this victory?

RM: I’m sure my experience had a good deal to do with it, but I knew what I had to do and I knew what my strengths were. I have pretty good cage control and I was able to use that well.

PC: You have been on the short end of so many close decisions; you finally got one to go your way and you did it in her backyard, which speaks volumes. Did you approach this fight as a “back against the wall” type of fight?

RM: Yeah! I did feel a little pressure that I had to finish the fight because it was in Russia. I felt a little pressure with myself, wondering if I would be able to successfully do the techniques I was training and most of all pressure to win because I was coming off of a loss. I felt all of that. But my coach, John Wood, told me that, “When you’re trying your best is when other people try to tear you down, so just focus on what you know how to do and you’ll be able to do it.” I just had confidence in myself and went for it.

PC: As the scorecards were being read, I’m sure you had some serious nerves going?

RM: I felt pretty confident after the fight ended. I felt like I really dominated and then when they started to read the scorecards, I thought, “What? Am I going to lose a decision?” I started freaking out, so I’m really glad that I got the decision.

PC: Was there anything about Shevchenko that surprised you during the course of the fight?

RM: My coach, John Wood, analyzed her very well. She did everything that I thought she was going to do except her arms are really long (laughing). She popped me a few times standing when I thought I was out of range, but I wasn’t. When I was on top on the ground, she was able to hold my head down a lot, which negated a lot of my ground and pound. I was very confused; like how is she able to hold my head down? I was really lost (laughing).

PC: How was it over there in Russia for you and did you have any trouble adjusting to the time difference or even food prep?

RM: I was a little jetlagged, but I took ample caffeine and I brought a little hot plate. I was really worried about being able to find salt free food because that’s important to my weight cut, so I checked my bag and I brought like a little mini hot plate and a little pot, so I had oatmeal, boiled chicken, and vegetables every day until the weigh-ins, so that was fine.

PC: You have been competing for close to 16 years, nearly 40 fights to your credit, and yet, you still have fun and we see you enjoying the weigh-ins with the wig and things like that. What has this journey been like for you and how do you keep things fun?

RM: Man, now that I’m at Syndicate, I feel like I’m not stagnant. I really feel like I’m improving, my strength is increasing, like I’m getting younger and I feel like I’m learning something new every week, whether it be Jiu Jitsu or striking. It’s so cool that I’m getting better and I don’t have fossilized habits really. I’m still able to improve and I can see it. Like one of the sayings on Dragon Ball Z, “We always get stronger after every loss or every battle, so I’m just going to keep going until I can’t go anymore.

PC: I have never seen so many people so happy for a person to win like people in the industry were happy for you. It really is hard not to cheer for you. Do you sense that around the locker room of these venues?

RM: Thank you for saying that. I’m really honored to hear that. (Laughing) I do get some of the staff that gives me little fist bumps. Even after I lost, a lot of people said, “Good fight,” so I think I have a lot of people cheering for me and that’s nice. I feel the positivity.

PC: It seems like finding consistency in your performances has been the issue. You win one and then drop one and they are all very close decision losses. You’re not being submitted or stopped, but do you feel like being at Syndicate is the key to finding some consistency?

RM: Absolutely! I went through a period of a losing streak where I didn’t know what to do and then I found Coach John Wood at Syndicate. He told me what I was supposed to do and I believed him and I went for it. His coaching has been amazing and when I’ve lost, it’s been close decisions. I never really got beat up beat up. It’s always been a close fight in my opinion. Syndicate and John Wood has been the keys to my success.

PC: You’re back in the top five…

PC: I hate to ask because you just fought, but is there anyone on the radar who you would like to test your skills against?

RM: Yeah! Honestly, I have some people that I would like to fight, like I lost to Jennifer Maia in Invicta. I would like to fight her again one day. But the fights right now that makes the most sense for me are the ones that lead me back to the title, so someone in the top ten would be great. I want that title shot again, so I hope the matchmakers will do that for me.

PC: What are your thoughts on the opposition in the division?

RM: I think everybody is good, everybody has talent and are strong and tough. All fighters want to fight a lot and I’m no different. Ideally, I want to fight after 2 or 3 months, but that’s probably not going to happen. I would love to fight in the summer time, let me just say that. So July would be great. I only make money when I fight, so (laughing).

PC: No bumps or bruises from your last fight?

RM: I hyperextended my elbow in training before the fight and it’s been kind of bugging me a little bit. I have some bruises on my face. Her leg kick really bruised my thigh a lot. It was one little kick. You could hardly notice it on film, but man, that sucker hurts (laughing). Just little things, very minor, and I’m training through it. They will go away soon.

PC: Congratulations again. I look forward to seeing you back in the cage. Is there anything else you want to add?

RM: Thanks for all the support. Thanks to my fans, thanks to my team, and I hope I fight again soon so you can see more beautiful violence.