NOTES FROM THE BOXING UNDERGROUND: THE "KOVALEV'S TAKING A DIVE" CONSPIRACY THEORY 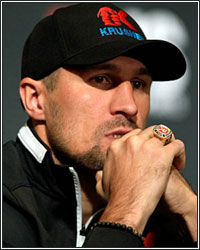 Boxing is the ideal sport for conspiracy theories. Given its nefarious past and often shady present—both full of “for real” screw jobs and mind-boggling, confidence-rattling corruption—there’s no question as to why boxing fans are so eager to believe the worst.

Most recently, my inbox has been stuffed with “The fix is in” emails about Saul “Canelo” Alvarez’s November 2 bout with WBO light heavyweight champ Sergey Kovalev. I’d usually save this stuff for my Thursday “Magno’s Bulging Mail Sack” column, but with nothing to talk about this week but “El Perro” Angulo’s upset of Peter Quillin on Saturday, I figured this might be worth the Monday column slot.

“Funny how when DAZN tried to force him to fight Golovkin again, Canelo suddenly started bringing another Eastern European into the conversation, wanting to fight him instead,” wrote one reader.

“Kovalev is shot and Top Rank and Main Events [who co-promote Kovalev] know this. Kovalev knows this too,” wrote another reader. “He had to fight Yarde because it was mandatory and he had to honor that fight in Russia and he barely got past Yarde. Now he cashes-out by taking a dive for Canelo.”

Another reader just sent me a one-line call to arms: “Boycott this bullshit fixed fight! Kovalev is taking a dive!”

And I get where all this is coming from.

As someone who has spent his career digging through the bullshit and mind-rattling spin routinely dished out to the public via promoters and publicists, I also tend to look for the dark clouds around silver linings. Boxing is a damn cynical business and the closer you get to the inside workings, the more cynical it gets.

The business of matchmaking DOES involve making the easiest permissible fights for the most possible money, selling good things like they were great and crap like it’s not crap. And in doing all this, there’s lying—lots and lots of lying.

It’s easy to understand why there’s so little trust in things being on the level in boxing.

And, in Canelo-Kovalev, there’s a perfect storm of possible bullshit—especially if you’re prone to buy into the “Canelo is a fraud…Canelo is protected…Canelo is a coward” narrative.

If Canelo is “ducking” one Euro-killer in Golovkin, why would he be moving up two weight classes to fight a bigger, stronger Euro-killer in Kovalev—unless there was zero risk in the fight and the result was in the proverbial bag?

And why would there be a two-fight DAZN deal on the line for Kovalev if he LOSES —unless he’s expected to lose?

Apparently, the Canelo-Kovalev conspiracy is as follows: Canelo is paying Kovaelv to take a dive to avoid meeting the “real” challenges at 160 and to let that middleweight herd thin itself out. Then, Kovalev gets two soft touch DAZN paydays to “rebuild” before moving back to ESPN where he can jump back into the light heavyweight mix there, either as a real player or as a big-name patsy to one of the other 175 lb. players. Win-Win-Win. Everybody makes money, Canelo appeases DAZN with a “tough” fight that’s not really a tough fight, and Kovalev extends his main stage career for at least another 18 months.

For the record, I don’t buy into this particular conspiracy theory. I also don’t buy into the narrative that Canelo is “scared,” fighting patsies and fall guys, and any more “protected” than any money-making star in this sport. I’d even go so far as to say that Canelo’s level of opposition over the last seven years or so has been greater than just about anyone’s during that span of time.

The upcoming Kovalev fight is a calculated risk, one which Canelo and his team feel they can safely take. There are flaws that can be exploited in Kovalev that make this a winnable fight for Canelo. In that respect, it’s about as fixed as fights get without actually being “fixed” in the traditional boxing sense. That’s being realistic. Notice how Team Canelo isn’t dialing up bigger risks with smaller profiles for this stab at “making history.” There’s nothing overtly shady going on, however.

But, again, how can you blame fans for being skeptical, cynical, and doubtful of everything they see in this sport? And if something weird does happen in this fight, something preventing it from a clear, conclusive finish or an honest decision, expect a real firestorm of tin hats flooding social media and boxing message boards everywhere.

-- I told everyone who would listen that Saturday’s Peter Quillin-Alfredo Angulo super middleweight bout was absolutely not going to be a walk in the park showcase for Quillin and I was more than proven right when “El Perro” actually won via split decision. Realistically, the win doesn’t mean a whole lot since Quillin looked absolutely awful, but it does keep the paydays coming for a limited, but always earnest and honest Angulo. I’m expecting his phone to be ringing off the hook with offers from the current world champs at 168 and I hope he makes a nice little bundle for laying his name at the feet of one of these titlists.

-- Errol Spence Jr. vs. Shawn Porter is Saturday and I’ll probably have something about this fight later in the week. It’s a good one, but not THE one, if you catch my drift. The bossmen need to find a way to make Spence-Crawford happen.