REGIS PRORGRAIS VS. JOSH TAYLOR: BOXING AT ITS BEST 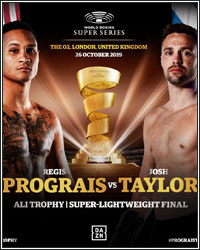 Last year, as the World Boxing Super Series (WBSS) had gotten off the ground, I predicted an eventual Regis Prograis-Josh Taylor tournament final and called it “A Superfight When It Matters.”

I was so hyped about this fight because it was a real departure from standard boxing protocol that actively cock-blocks quality 50-50 fights between elite-level talents until every last bit of hype juice has been drained from the fight and, as is usually the case, both fighters have drifted to post-prime status during the years and years of marinade.

“Both undefeated young stars are spectacular physical specimens with the reflexes and athleticism to instantly place them among the elite 1% in the sport. They’ve also shown in recent fights the ability to box and to apply pro-level smarts during high-end contests.

In boxing these days, with so much business mucking up the fighters’ actual fights, it’s exceedingly rare for someone to become a true star on the merit of star-making performances against even money opposition. It’s even rarer when a young star’s breakthrough fight is actually the best fight to be made in the division.”

Now, Prograis-Taylor is just days away, as Saturday’s main event and WBSS junior welterweight tournament final at London’s O2 Arena and everything I said about this fight last year still applies.

Prograis’ Rougarou Cajun Werewolf routine is nice, but it takes a back seat to the reality of what Prograis brings to the ring as a fighter. The New Orleans-born southpaw is an all-around beast of a fighter with extreme physical gifts that allow him, pretty much literally, to do whatever he wants to do in the ring.

A late start to his career is forcing the 30-year-old to go a bit faster than most 7-year pros with limited amateur experience would go, but Prograis is a true natural and has responded to a higher level of opposition by upping his game accordingly. In his most recent bout, a WBA 140 lb. title-winning effort against Kiryl Relikh in the WBSS semi-finals, “The Rougarou” confirmed himself as being every bit as good as the hype he’d been given.

“The Tartan Tornado,” Taylor, meanwhile, has been doing exactly the same as Prograis—proving himself to be worthy of the hype that gave him a reputation as a superstar-in-the-making. Victories over Viktor Postol, Ryan Martin, and a WBSS semi-final win over Ivan Baranchyk to become the IBF 140 lb. champ have proven him to be no mere hype job.

The 28-year-old from Scotland, like his opponent this Saturday, is thought to be one good fight and big performance away from achieving true star status and this Prograis fight is key to getting the high-profile, big-money fights his abilities suggest he should be having.

That’s a big reason why this matchup is so compelling. As I noted previously, both fighters have elite-level abilities, but this particular fight stands between them and becoming the stars they were predicted to be.

In other words, not only is this a prime vs. prime battle, it’s also a true “must win” showdown.

The storm cloud to this silver lining is that the fight will be buried behind DAZN subscription-only paywalls, making the potential audience much smaller than it should be. But, in a sport where fans are accustomed to seeing bad news heaped on slightly worse news on a regular basis, solace can be taken that, at the very least, we’re getting a really good fight. And, hey, maybe something like this starts a trend.

“...Maybe the rays of positivity coming from this young gun, best vs. best clash will inspire similar pairings. There has to be faith that if things are done right, with the fans being rewarded with good, challenging, and meaningful matchups rather than bilked through hype and deceit, the big money will still be there. And with that big money, there will be more loyal fans willing to be long term loyal consumers.”