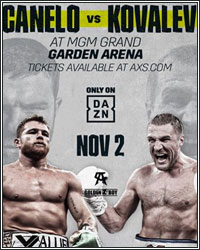 I’m not going to lie, Sergey “Triple K” Kovalev—because of his history of racist BS behavior and general douchebaggery—is not a personal favorite of mine. But even I felt a little worried for the guy after seeing Canelo Alvarez ragdoll him with a left-right in the eleventh round of Saturday’s bout at the MGM Grand.

Not long after warning friends to brace themselves for mega post-fight whining when a close decision goes Canelo’s way—again—the Mexican star made sure there would be no whining, no controversial decisions after all.

Although I had the fight even, 5-5, up until the very end, I was seeing scores all over the place on social media, ranging from Canelo 7-3 to Kovalev 7-3. Alvarez did the entire boxing world a favor by closing the show and making the judges’ scorecards a non-issue. (By the way, two of the official scorecards had Canelo winning 96-94 at the time of the stoppage while the other had it 95-95).

Alvarez, however, seemed fine with losing some rounds in pursuit of the perfect KO shot (or shots).

Kovalev picked with the jab on the outside much of the evening, unable and unwilling to open up against Alvarez, who was using subtly brilliant footwork and distancing to keep Kovalev at a perpetually off-putting range. The Russian would occasionally bumrush Alvarez with shoulder-first lunges to open up proper distance, but he was never able to firmly establish the space he needed to launch any sort of meaningful offensive push.

The only question was whether Canelo could find that sweet spot to end the bout and that, if he did find the sweet spot, whether he had the power to stop the naturally larger Kovalev cold. The answer was a resounding “yes.”

Alvarez also did DAZN a big favor by turning the story of the evening away from the streaming service’s insulting decision to make an arena full of fans and a world full of TV viewers wait for UFC 244 to end before starting their own main event.

The painfully submissive strategical call to not compete with the UFC’s Nate Diaz-Jorge Masvidal main event—and hopefully grab a few post-UFC impulse buys for Canelo-Kovalev after the UFC show—was a kick in the teeth to the boxing fans who had already paid for the privilege of watching the big fight.

The DAZN decision to piss on their subscribers created a scenario where 104 minutes passed between the lead-in Ryan Garcia-Romero Duno bout and the Canelo-Kovalev main event, which didn’t hear an opening bell until 1:18 in the morning ET. Fans at the MGM Grand booed the forced downtime aggressively and chants of “Bullshit” filled the arena (where the cheapest seat was $400) until a decision to show the ESPN-aired UFC card on the MGM Grand screens silenced much of the dissent. Comedic screen caps of both Canelo and Kovalev napping during the delay, however, have been filling social media and should be a real black eye for DAZN’s reputation as a wannabe fan-friendly big-time boxing operator.

Yeah, fans got a “cheaper-than-PPV” mainstage bout, but because it’s cheaper, does that mean DAZN has the right to deliver disgustingly weak undercards and shove dead-air nothingness down subscribers’ throats?

One has to wonder whether the likely small handful of sign-ups they got from fans disengaging from UFC 244 was worth dissing their loyal, paying customers. But, then again, when a customer chooses to buy content in bulk—like they’re essentially doing with DAZN—poor quality control sometimes goes hand-in-hand with discount prices.

But, getting back to the actual fight.

Canelo-Kovalev was a little on the dull side right up until the explosive finish. It was alright, though. It certainly was a highlight reel moment in the career of the 29-year-old Alvarez who has assumed the “cash cow” throne from Floyd Mayweather and also the “make boxing ‘purists’ angry-piss their panties” mantle from Mayweather.

Alvarez is now, officially, a four-division world champ who currently holds three divisional titles simultaneously. It’s a significant feat—even if DAZN’s insulting decision to defer to the UFC on Saturday night kind of worked to make him look less than what he is.

-- Kovalev, after his “Krushing” loss, seems to have already started the excuse making and deflection, commenting, post-fight “I didn’t recover from my last fight” and possibly hinting that the loss was a result of poor strategy (i.e. trainer Buddy McGirt).

-- After all the back-and-forth trash talk and assertions that Ryan Garcia had somehow been ducking Romero Duno, Garcia knocked Duno out in the first round of their bout on the Canelo-Kovalev undercard. It shouldn’t have been a surprise. There are levels to this game. Talent usually trumps all at this stage of fighters’ careers. Being tough is not enough.

-- Overshadowed by the Canelo-Kovalev card was a pretty decent one over at FS1 and Fox Deportes. In the 154 lb. main event, Argentina’s Brian Castano dominated Wale Omotoso until a shoulder injury forced the LA-based Nigerian to retire from the contest in the fifth round. In the co-feature, former world titlist Javier Fortuna blasted away fellow former world titlist Jesus Cuellar in two rounds.