LAMONT ROACH JR. ON JAMEL HERRING CLASH: "IT'S MY TIME...YOU WILL SEE THE DIFFERENCE" 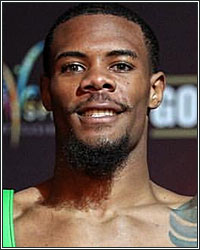 "I wouldn’t say sooner or later. You have to go through the process in this game. You have to trust your timing, trust God’s timing, and trust the work you put in. The timing now is perfect for me; it’s my time," stated super featherweight contender Lamont Roach Jr., who talked about his upcoming clach tonight with world champion Jamel Herring. Check it out!

JR: Did this world championship opportunity come for you sooner or later than you expected?

LR: I wouldn’t say sooner or later. You have to go through the process in this game. You have to trust your timing, trust God’s timing, and trust the work you put in. The timing now is perfect for me; it’s my time.

JR: I thought this fight should’ve been on the East coast, with both you and Jamel Herring from that side.

LR: Wherever the ring is, that’s where my home is. I thought it should’ve been on the East coast as well too, but they’re going to do anything they think that can give them an advantage.

JR: These opportunities don’t happen too often, so I know you’re looking to take advantage of it. How long have you been in Indio, California?

LR: I’ve been out here for about a month and some change now. I’ve been working hard out here in Indio with my dad [head coach Lamont Roach Sr.] and Antonio Diaz. It’s been nothing but hard work. My dad has mentioned to me before that we may come out here more, not just for training camp, but to get some work in. Him and Joel [Diaz] clicked and my dad likes his style of training because it’s almost similar. They meshed very well.

JR: Is there a possibility that, in the near future, we can see both your dad and Joel Diaz in corner?

LR: You never know. My dad is always going to be the number one in my corner. But those two working together have been doing a great job.

JR: What are some things that you’ve been working on to improve that we can expect to see in your bout vs. Jamel Herring?

LR: You can expect to see, how can I say it, we worked on a style to a tee and we’ve been executing on it ever since I got out here.

JR: Can you see differences with this training camp mentally and physically that are better than your last camp?

LR: Definitely. We knew with this fight coming up that we were in the fight of our lives and we had to step it up. I know for my fights every camp has been harder and harder, but this one is different and feels like a world championship camp. I can tell the difference and you will see the difference.

JR: I know Jamel from when he was a contender coming to DC for camps; always been a gentleman with everything he does. I know you both met together before also. Around what year and time did you both meet?

LR: Yeah, I know Jamel personally. I met Jamel when I was in the amateurs around I think when I was 14 years old. He’s from New York and was training on the East coast and I think in the DC, Maryland, Virginia area for a while and with the Marine Corp. But the first time I met him, I think was the first time I sparred him.

JR: Congrats on your contract extension with Golden Boy also. Did you get that before or after your world championship bout was announced?

LR: It was after the fight was announced. I pretty much knew my contract was coming to an end after my last fight. They gave us an offer to extend and obviously we accepted. So shout out to them; shout out to Robert Diaz, Oscar De La Hoya, and Eric Gomez. Thank you for trusting in and believing in me. They wouldn’t have extended it if they didn’t believe in me, so I’m thankful. They know what’s up.

JR: Thanks for your time Lamont. Anything else you want to put out there?

LR: I’m at @Oneof1x on twitter and IG. Shout out to my whole team: Ross, my family, Joel and Antonio Diaz, Alex and George Rincon. It’s going down, man. I’m going to do this for everybody that supports, for myself, Boogaloo, and the city.