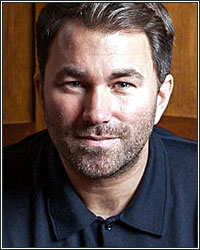 Last week, I did a piece on DAZN and their apparent attempts to create a paid-for, compromised media corps. Since then, the story has actually been making its way through the side channels of the online Universo Pugilistico.

In short, I wrote about a number of troubling strategies reportedly employed by the streaming service to bend an already compliant boxing media in their favor. This included free flights and hotel accommodations to key media members, the use of paid affiliate programs (which allows the strategic placement of links to the DAZN subscription page for a monetary reward to site owners), as well as direct offers to provide paid stories/posts to sites. There were also reports that the DAZN parent company had “invested” a significant amount of money in the Oscar De La Hoya-owned Ring Magazine and its website, RIngTV.

DAZN’s lead promoter, Eddie Hearn, was also mentioned as someone who facilitates this media-molding strategy and whose leadership has allowed for preferred access to certain media outlets.

"Our job is to make the event as big as possible, to get as much exposure, to get as much publicity for the fight. So, we will do what we have to do to get that publicity. Should a promoter worry about the journalistic integrity of a media member and not pay for their room? Absolutely, fucking, no way. Should a journalist? It's up to them.

"...I've paid for Dan Rafael's hotel room in Dallas, or wherever we were...so what? He covers for ESPN! It's a big deal to get him at my event. And, you know what? I'm going to continue to do it. After that article, I'm going to do it even more...If I can get key media members and look after them...I'll take them for a nice dinner, nice glass of red wine...Is that a problem?"

Well, yeah, it’s a problem if the goal of journalism is to report objectively on an event or company. And, in the case of DAZN’s specific business partnerships with websites and media voices, it’s particularly troubling to have media with a vested interest in the success of the company, also reporting on that company without ever revealing their business affiliation.

(On a side note, though—Dan Rafael? The man makes ESPN-money and is still taking handouts? That’s a whole other level of piggish behavior right there.)

But Hearn is right. It’s not the promoter’s or network’s job to worry about the journalistic integrity of the media covering them. They are there to sell an event and create as much favorable buzz as possible. It’s the journalist’s job to blow off the free swag and attempts to butter him up. It’s the media’s job to provide the checks and balances to power—something which they are clearly not doing.

“How thick are these people to think that the world doesn't work like that?” Hearn doubled down to IFL TV (one of the media outlets with preferred access to Hearn/Matchroom Boxing/DAZN events). “In fact, I'm going to start paying for more journalists and more media to come to our events...How many times have I taken the journalists out for dinner? Loads. When was the last one? It was in Texas for Hooker-Ramirez. We went out for a lovely steak, a few bottles of red wine...cost me a nice few quid. Is that naughty? Should I not be taking the journalists out? Are you living in the dark ages?”

It’s clear from these video interviews, especially how he mockingly circles around the word ‘integrity’ when referring to journalism, that Hearn has a certain inherent disdain for the boxing media. And why wouldn’t he have that disdain when the media acts as it does, like star-struck giggling groupies and/or panhandlers grubbing for loose change, making an absolute joke of themselves?

As a rich kid born into the boxing promotion game, Hearn has seen no other side of media. As he stated on the IFL TV video, what others may see as media manipulation is, to him, “common sense.” Given who he is and where he comes from, talk of journalistic integrity must seem absolutely absurd.

But people like Hearn also clearly understand that they need the media. There is great power in wielding the pen (or camera). If the media really wanted to keep its all-important ‘access,’ they could—and without compromising one bit of its integrity—because the boxing powerbrokers need media much more than media needs them.

And for those readers who may be questioning why they should give a damn about boxing media and its integrity, well, the strength (or weakness) of the media has everything to do with the quality of the product we receive.

A strong media holds feet to the fire and makes these people accountable for their actions. They are checks and balances to power and should be the frontline defense for the boxing consumer. When the powerful in the sport know they can get over on the media and manipulate their coverage, they get away with all kinds of nonsense—from shoddy matchmaking to garbage decisions (because how can we trust that the shame-free “hospitality” shown for favorable media coverage doesn’t get amped up considerably when applied to the officials for the bout?).

Predictably enough, the initial story that opened this topic for conversation was met with attempts to kill the messenger rather than address the message.

Was there a hidden agenda behind FightHype publishing this piece? Was FightHype out to ‘get’ specific media outlets that were getting ‘too much’ access? Was FightHype jealous or ‘salty’ about competition in the field?

It should be made clear that the writer of the piece in question was me, Paul Magno, and not FightHype. Nobody commissioned me to write that article and there was no other ulterior motive for writing it beyond a desire to address a subject I felt to be important. Nobody was aiming to limit the ‘access’ of any particular geek with a camera or adversely affect his ability to fist-bump celebrities backstage while collecting YouTube ad click money. As someone who asks for no access, gets no access, and has been able to make a full-time living in this business for over a decade now, I, personally, couldn’t care less about this nitwit subculture of video-toting groupie love. And if you’ve followed my work over the years (and the bridges I’ve willingly burnt), you’d know how ridiculous it is to think that anyone, anywhere could “tell” me what to write.

So, anyway, this is what it is. DAZN and Hearn do what they do. Hearn says it’s up to the journalists to decide whether to have integrity in their work or not. Fans SHOULD care about all this, but many won’t. Fans and fighters continue to get screwed. Boxing business goes on as usual.