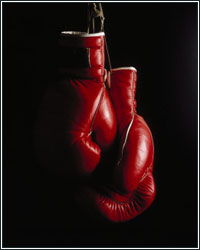 So, how, exactly, do we bring boxing back and keep everyone as safe as possible? Just about everybody in the boxing business is talking about it and every fan is chomping at the bit to get some live fight action back into their lives.

For the most part, I've stayed away from some articles on the subject and intentionally steered clear from out-loud thinking by industry bossmen. I don't trust any of them to do a great job at easing boxing back into action, but I do hope for the best.

This may be the most off-putting element to the entire plan, but the construction of temporary gym spaces and lodging around the host TV studio would keep the risk of outside infection (and last-minute cancellations) to a minimum. Fighters and team members would be placed into a self-contained world, isolated from the outside for the CDC-recommended self-isolation period. This is a bit much, yes, but it's temporary.

Keep fight cards small to facilitate the above

Logistically, a ten or twelve-fight card would be a nightmare if the above idea were employed. For that reason, it would be ideal to keep the size of the card to a minimum. Three or four fights per card (with possibly one emergency fill-in bout) would be perfectly manageable and allow for sound safety measures.

Continuous testing-- Before entry to fight compound, during training, before weigh-in, etc. and a firm plan on how to deal with positive results

This one is self-explanatory. Testing is key to all of this. And that testing goes for everyone involved in the telecast-- studio tech people, officials, etc.-- not just the fighters and their team members. Anyone testing positive for the virus needs to be immediately removed and isolated off-compound.

Treat fighters and all participants with respect and dignity

There can be no real expectation of safety when participants are asked to sign "you're completely on your own if you become infected" contracts and/or forced into shady non-disclosure agreements regarding concerns over safety protocol. The UFC's comeback was built around such contractual nastiness and, aside from being dubiously enforceable, it casts an unnecessary black cloud on the legitimacy of an event. If they're not going to treat the fighters (and everyone else involved) with respect and dignity, don't even bother making these comeback shows.

The WWE's no-audience televised shows have been awful and most of that is due to the shows being held in their large Florida Performance Center, where the sheer emptiness of the space creates echoes and a ghostly feel. Boxing's no-audience shows will come off as similarly hollow if held in some big, cavernous arena. Instead, small studios should be targeted to eliminate any and all empty seating. Organizers should mic the hell out of the ring area to capture all the sounds and general feel of the action, from the impact of the punches to the sound of the cornermen shouting instructions. If done properly, the cards will capture the warm feel of ringside at club shows or the inside of a busy gym.

Boxing WILL be back and there's no working around the fact that the first comeback shows will have to be small, tentative steps forward. Following this 5-point plan, at least in my biased opinion, would keep things safe for the participants and entertaining for the fans.