NOTES FROM THE BOXING UNDERGROUND: IF MUHAMMAD ALI WERE FIGHTING TODAY 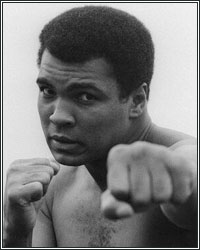 I got an email yesterday-- a mail sack question-- but it resonated with me so much that I thought it would be better to tackle it in a full column. It didn't resonate with me in the way the reader intended, though.

Anyway, here's what "Joe from St. Louis" wrote to me:

Long-time fan, first-time mail sacker. I've been seeing some talk in the glorious boxing media about Muhammad Ali and how he'd fare against some of the stars of the modern boxing era. To Mike Tyson's credit, he said that nobody would beat Ali, period. I tend to agree with the champ. What say you, Sr. Magno? What if Ali were fighting today?"

Forgive me, Joe. I'm about to go way off your beaten path, but I promise I'll double back and answer your direct question at the end of this column.

Muhammad Ali died a hero-- a recognized hero, even among those who generally don't take kindly to dissent against the American machine. As I wrote in a tribute to the man:

"He was born reviled and marginalized, but he died a beloved legend. He fought a nation and won; he knocked out a culture. He bent the world to his whim-- a lesson for any fool who thinks that one man can't change the world."

Active Ali was not beloved by the mainstream. He was hated. To the "law and order" set, he was a "trouble maker," an "ungrateful" traitor, a "coward."

That's why, in the present tense, when I see all these same types of "law and order" fight fans, who list Ali among their heroes and go on and on about how they love him, I get a little knife-jab in my gizzard. These are the same assholes who despise Colin K for taking a knee and who publicly lament over "these thugs burning down their own neighborhoods" during the George Floyd protests. The same fucking people...and they LOVE Ali?

These people would HATE Ali if he were around now. Who are they trying to kid? Ali, like Martin Luther King and anybody who bucks the system, is only palatable in retrospect, after they're dead and/or rendered non-threatening. Ali, specifically, wasn't an icon until Parkinson's Syndrome claimed his vitality. Can you imagine Ali-- a thousand times more fiery and charismatic than Colin K or anyone out fighting the good fight right now-- ruffling feathers?

The same slugs who recently loaded comment sections with negativity after Timothy Bradley told his heartfelt story about a run-in with the police on ESPN are the same slugs who would have an absolute hissy fit if Ali were doing his thing. How the hell are you going to have a Muhammad Ali profile pic on social media while threatening to boycott ESPN because "this race stuff is just too politically correct?" As the kids say: GTFOH.

If Ali were fighting today, he'd probably be sanctioned for his politics by the governing bodies, attacked by angry white people on social media, and called a "son of a bitch" by the President, just like those NFL players who took a knee during the national anthem. We've come a long way since the 60's, but not THAT far. The ugliness is just the same, it's just buried a bit deeper and harder to coax out into the light.

But you can be damn sure that, when push came to shove, many would be just as angry and as perplexed at this rich athlete's "audacity and lack of patriotism" as they are with those athletes at the moment who even mention any concept related to injustice and lack of equality.

Beyond the dark-alley world of boxing, the moment equality and justice become "political" and not just basic human concerns, is the moment we are officially hopeless as a nation and as a culture.

That kind of talk, though, is well above my paygrade. All I know is boxing...and its fans and its culture. And I can guarantee you that a young Muhammad Ali in 2020 would be suffering through the same outside-the-ring bullshit and attempts to stifle his career that he dealt with in the 60's.

Okay, "Joe from St. Louis," here's me doubling back to now directly answer your question.

There's reason to believe that Ali might struggle with the size and pure heft of modern day elite-level heavyweights. Although he was tall, himself, at 6-foot-3 and had a 78-inch reach, he'd still be giving up 4-7 inches in reach and around 40+ lbs. in weight when stacked up against the present tense top 3-- Tyson Fury, Anthony Joshua, and Deontay Wilder (except Wilder, who would only outweigh Ali by 10-20 lbs.).

But I tend to turn away a bit from the "bigger is better" philosophy when it comes to heavyweights. In that division, I think speed, timing, mobility, and general ring IQ are much more important factors than size and brute strength.

When you factor in Ali's famously strong will and focus-- alongside the speed, timing, mobility, and general ring IQ-- I don't see him failing in any era of big men. The toughest task of the top 3 right now would be Fury, who can mix some nuance with his mass, but I still don't see him being able to outpoint a prime, sharp Muhammad Ali.

There's always the chance that he could get clipped by something big. But, aside from the puncher's chance, I think Ali would beat them all-- and look like a man schooling kids in doing it.