NOTES FROM THE BOXING UNDERGROUND: WHINING WHILE ROME IS BURNING 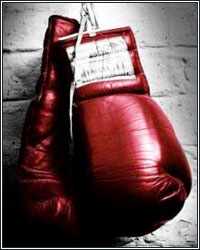 Against my better judgment, I found myself reading an article a couple days ago by an unnamed "senior writer" for an unnamed highly-trafficked boxing site-- a guy who, I guess, unbeknownst to me, has beef with me because I've said mean things about his beloved media brothers. Whatever. Anyway, this "senior writer" devoted an entire column to bashing the WBA for booking a couple of "interim" title fights.

So, what's THE problem facing boxing right now in the present tense?

Very simply put-- Nobody cares about our product anymore and, thanks to decades of mismanagement, there's no mechanism in place with which we can energize people to start caring again.

I think the shitty TV ratings we've been seeing across the board are more than just a product of the pandemic and the general buzzkill it's been to the world.

I believe boxing fans got a break from the sport, some separation from the routine, and realized that they didn't miss what boxing had become. They realized just how poor the product has become, how handcuffed it's become by politics and bad business. And they realized that they're just not missing out on much.

A boxing fandom grateful for the sport's return should've flocked to see its comeback-- even if they weren't exactly being given upper-tier names or matchups. Not only have they not "flocked," they've stayed away in droves.

The UFC, though, has not suffered through this dynamic, even when serving up their own lesser product during their comeback from the shutdown. A pay-per-view main event featuring  Justin Gaethje and Tony Ferguson (neither a top company star) at May's UFC 249 generated 700,000 buys. July's UFC 251, with Kamaru Usman vs. Jorge Masvidal atop the bill, generated 1.3 million buys. Even the UFC's preliminary bouts prior to their secondary UFC on ESPN shows do twice the ratings of Top Rank's main, primetime cards.

This is because the UFC energizes its fan base, caters to their consumer needs, and has established goodwill with them. In return, they were eager to consume once they could consume again.

In contrast, boxing consistently antagonizes and alienates their base. Boxing doesn't even bother to use bait for the bait and switch anymore. They just don't give fans what they want and are not even apologetic anymore. Being a boxing fan has become a "take what you get and be happy with it" proposition. The good fights, the really big fights, the ones fans buzz about-- well-- they almost assuredly won't happen and there's no real move towards changing this. What kind of consumer masochist would keep funneling time and money into a deal like this? It's like sitting at a casino, chucking coins into a broken slot machine that can't ever provide a payoff.

The Covid shutdown gave boxing fans time to reflect on this.

Showtime's first card back from a long pause, with Angelo Leo vs. Tramaine Williams headlining, averaged only 150,000 viewers.

Even over in the supposedly boxing-hungry UK, things look bleak.

Eddie Hearn's return to Sky Sports on August 1 drew an average viewership of just 93,000. But that was significantly better than Frank Warren's card the night before, which averaged a measly 3,000 viewers or Warren's July show, topped by unbeaten heavyweight prospect Joe Joyce, which averaged just 10,000.

This more than kinda, sorta makes Hearn look really foolish about this finger-wagging sermon aimed at Bob Arum back in June:

"The content is not good enough. And you’re seeing that being reflected in the ratings. You know, Top Rank and ESPN shows are running non-competitive fights and a lot of the times with fighters that don’t have significant profiles. You’ve only gotta look at the ratings that are being produced by ESPN and Top Rank – it’s horrible for the sport. It’s giving people an excuse to say, ‘Boxing’s dead!’ Boxing’s not dead, when you get the product right. And when we come back, we’ve gotta make sure we get the product right."

Superfluous swipe at Hearn notwithstanding, all of this lack of interest in boxing's return is more than just about the quality of the comeback offerings. Sure, big names would produce bigger ratings than the ones we've been seeing up until now, but I'd make an educated guess that the numbers would be down for anyone and anything. And I think this is because of what I mentioned above-- the downtime allowed fans to realize just how poor the product has become and how they're not really missing out on much anymore. Hell, fans were coming to that realization and walking away BEFORE the virus hit.

If the sport's powerbrokers are not seeing this and worrying about it, they are even more grossly incompetent than I imagined. The thing is-- with business commitments forcing the sport to be spread out on a legal torture rack and business failings forcing a paywall system to be implemented-- if it's even possible to fix this mess right now.

If they can't get a patch on the hull of this sinking Titanic, the "problem" of interim titles and showcase squashes won't matter one bit.