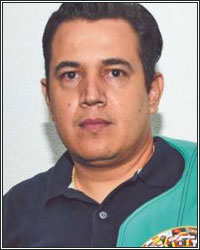 Welcome to another edition of Magno's Bulging Mail Sack, the boxing mailbag column that makes the Boxing Writers Association of America fear-tinkle in their Depends. This week, we have questions/comments regarding boxing's best trainers, how to fix boxing's ills, and boxing on TV.

FIRST,  Hope all is well with you and your family are doing as well as you can during this pandemic. I read the mailbag and Notes from the Underground often. Keep telling the truth on these cats.

Second, a lot of the this generation of boxing fans know nothing about how boxing used to be on regular TV back in the early 80s (I know it goes back further than that). There was a show called Wide World of Sports where Jim Lampley and Alex Wallau called fights. Even CBS and NBC showed fights. I'm talking about title fights, too, such as Holyfield vs Qawi for Qawi's WBA strap, Starling vs Breland for Breland's WBA title Hearns vs Andries for Andries WBC LHW crown. (I have them on video cassette. Don't judge me..lol) And fighters floated between regular TV,HBO and Showtime. But sometime in the later 90s early 2000s, boxing was abruptly snatched off TV and put exclusively behind HBO/Showtime/PPV walls. Do you believe that had boxing stayed on regular TV that it would still be as big today as it was back then? Thanks P Mag and keep doing your thing.

I think people deeply underestimate how important free and easy access is to the sport. It boggles the mind how this could be overlooked, but it is. Well, actually, it's not really so mind boggling at all...because boxing's powerbrokers don't care about building a base as much as they're interested in bilking the existing base for as much as they can, as often as they can.

But, yeah, free and easy access built much of the base that is currently shrinking away. I know, for me, watching Sugar Ray Leonard, Roberto Duran, Tommy Hearns, etc., on network TV as a kid hooked me on boxing. It's simple logic. If I had not come across the sport while flipping through the channels, I would never have been hooked. I sure as hell would not have paid money in order to check out a sport that I had never been exposed to.

That's how you can tell that many of these boxing guys don't really care about the long-term health of the sport. Sticking everything, at all levels, behind a paywall ensures that new, curious fans will not be brought into the fold. Who's going to pay a premium for something that they know nothing about?

The younger fans DON'T get how much boxing used to be woven into the fabric of our society. It was a big deal, a major topic of conversation the day after fights and all through the lead-up to a fight. And we're not just talking about one or two big events a year.

We just don't have that anymore and, with the exception of PBC and their Fox programming, nobody in the business is even trying to get us back to that point.

To answer your question-- If boxing had stayed on free TV, we'd still be looking at diminished numbers. The rise of cable TV and the creation of the internet has created hundreds and hundreds of entertainment options for consumers and that would pull audience away from boxing. But the fall from fans' collective conscious and unconscious would not have been so prodigious had boxing continued to be free and easily accessible to the masses.

We would've been alright, though. And it could even be argued that the sport's reach would've grown alongside the overall growth of cable and internet programming.

I don't think we'll ever get back to that point of being mainstream again. We were already burning our bridges with the mainstream before the bossmen took the sport deep behind paywalls. Corruption was turning off a lot of people and making networks second guess their investment in boxing. Overall, we've done so much damage to our ability to grow that I think the best we can hope for is to stabilize our decline and hope the shortsighted dinosaurs running things die off so we can get new blood at the top.

I hope that you’re doing well and staying safe. I enjoy your boxing insight and appreciate your work and reporting. I’ve been a boxing fan for as long as I can remember. I’ve heard many people say that Eddie Futch is considered the best trainer ever. I’m sure there is merit to support that claim, but it’s also subjective. From your perspective, can a great trainer make a fighter better than the fighter’s natural abilities? Can a potentially great fighter or great athlete make a trainer a better trainer than he would be if the trainer were working with an average talent? Also, which trainers would you list as your all time greats? My list includes Eddie Futch, Manny Steward, Harry Wiley, Angelo Dundee (although some may short change his abilities) and Ray Arcel. Also, any current trainers that you think are impressive? My list is Robert Garcia, Derrick James, Brian McIntyre, Eddy Reynoso and Ronnie Shields. Thanks in advance.

A good trainer turns a raw talent into a skilled fighter. You need a certain level of athleticism to get to the highest levels of the sport, but fighting at the elite level is not about athleticism as much as it's about skill, discipline, and character. A good trainer will instill that into a willing fighter. Very few fighters are able to coast to great success on raw ability alone and, of the few that do, their ride at the top is usually not long. On the other hand, a truly skilled fighter can survive and thrive for years after his natural athleticism has eroded. You only have to look at Bernard Hopkins to see that. B-Hop remained at the elite-level well past his physical prime, utilizing basic skills and ring IQ to make up for lost speed and reflexes. It could be argued that in his last five years, from 45 to 50 years of age, he was thriving on nothing but his experience and impeccable skills.

Trainers do look better if their fighter is phenomenally gifted and/or a true student of the game, but they eventually settle in at their true level. I could name a few overrated trainers who benefitted greatly from having a superstar-level, essentially self-made fighter, but I don't feel like casting any stones right now. I will add, however, that it's totally possible to see a trainer actually learn from his fighter and become better as he becomes more seasoned from the gig.

As for your list of top trainers. I can't really disagree with any of them. I will add two of my favorites, though, and these guys go on both the all-time and present day lists-- Nacho Beristain and the recently deceased Naazim Richardson.

How to Fix This

I read your column on Monday (Notes from the Boxing Underground: Whining While Rome is Burning) and whole-heartedly agree. Boxing is killing itself off with bad decisions. Most of all, they just won't get together to give the fans the fights they want and if the consumer continually doesn't get what they want, they just don't come back. It's like any other business. Boxing has taken their fans' loyalty for granted and will pay the price.

My question to you is how this gets fixed. Maybe there's no answer. That's sad to think about because I have been such a loyal, excited fan in the past. I just don't feel that excitement anymore and none of the promoters have done anything to try and win me back. What would you suggest, Paul?

I hate to sound like such a cynic, but I'm becoming more and more convinced that the current lot of boxing bossmen are utterly hopeless and incapable of righting the ship. We probably have to have a full collapse of the boxing economy and dying out of the dinosaurs in charge before things are restructured properly and built with growth and self-sustenance in mind.