IS "BOO BOO" ANDRADE FINALLY GETTING IT? 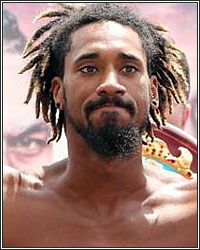 It’s taken almost a full decade for Demetrius “Boo Boo” Andrade to get to this point, but it appears that he may finally be “getting” it.

After blowing through an overmatched Jason Quigley in two rounds Saturday night on a DAZN-televised main event and WBO middleweight title defense from SNHU Arena in Manchester, New Hampshire, Andrade’s “nobody will fight me” laments were tempered with some unusual pragmatism.

“Let's get the fighters we need to do...on this broadcast, Matchroom,” Andrade pleaded in a ringisde interview. “That's Jaime Munguia, that's Billy Joe Saunders if he decides to come back, that's Triple G, Murata. At the end of the day, those are the names that we can make possible on this platform, so let's drive that engine...We need to talk about what we can do here, right now, and what's the next steps to make the things happen here.”

Gone, for the most part, was the targeting of a title unification bout with WBC champ Jermall Charlo, which has proven impossible to make due to conflicting business ties. Gone, too, was the obsession with a Canelo Alvarez blockbuster, which is now completely out of reach due to him pissing off the temperamental superstar by invading his post-Billy Jo Saunders fight press conference.

Andrade now seems focused on making big fights that can actually be made, in-house. Why it took so long to figure this out and call out these in-house fighters is anyone’s guess. With at least a couple of big middleweight names fighting on the same platform/network for a couple years now, he’s coming to this realization way late. But he’s there now, so let’s celebrate that.

It probably wasn’t easy, however, getting to this pragmatic outlook with all the steaming bullshit and deflection coming from DAZN and promoter Eddie Hearn-- a lot of it on display Saturday night, in direct conflict with Andrade’s apparent epiphany.

"Jermall Charlo-Demetrius Andrade is the biggest fight that can be made in boxing,” DAZN commentator Chris Mannix sharted aloud on Saturday’s telecast, continuing his years-long, company-friendly fixation on Andrade-Charlo. “Give me Demetrius Andrade-Jermall Charlo over Errol Spence and Terence Crawford, over Tyson Fury against Usyk or Joshua.”

“What is going on with boxing when you got two great, undefeated American world champions in the same division and they won't share the ring together for one reason-- Jermall Charlo.”

To be fair, Hearn eventually got around to mentioning DAZN contract players Munguia and Golovkin for Andrade, but it’s clear that the “go to” scapegoat for the management-types is still Charlo (no longer alongside Canelo, who they don’t want to piss off in fear of not landing future bouts of his).

But Andrade seems to see the right path. And one would like to believe that he’ll stay on it now.

He bludgeoned Quigley in a most entertaining performance, with the bout staged in front of a supportive crowd, just about an hour-and-a-half from his Providence, Rhode Island home base. Exciting efforts + raucous crowds + proper opponent targeting for the immediate future generally equal next-level stardom and the accompanying big fights.

The two-division world champ, however, has shown a propensity for flashing moments of awareness and brilliance before settling back into his general funk. We’ll just have to see if this time things are different.

On the downside of his physical prime at 33 years of age, for his own sake, things HAVE to be different.