NOTES FROM THE BOXING UNDERGROUND: TWO CLASSICS, ONE DAY 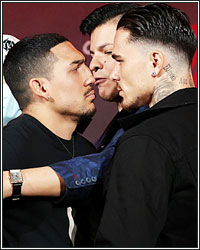 Well, damn. George Kambosos, who I gave zero to wafer-slim chance of even surviving past the ninth round, dropped, out-fought, and out-worked Teofimo Lopez Saturday to take the IBF, WBA, and WBO lightweight belts (but not the WBC Franchise title, which, I think, can only be transferred from fighter to fighter via Mauricio Sulaiman voodoo blood ritual).

Nobody saw this upset coming. But, honestly, it didn’t surprise me all that much as it was happening.

The 24-year-old Lopez had been sounding and looking increasingly “off” as he stewed in months of inactivity, surrounded by people-- whoever they may be-- who were clearly not keeping him grounded in reality. That inactivity, of course, was due to a botched promotion from mega-incompetent IBF purse bid winner, Triller, and Lopez’s COVID-19 infection in June, which touched off the massive Triller bungle in the first place. After eight date changes and five venue changes, the IBF would eventually rule the social media/video sharing company in default and allow runner-up bidder Matchroom to promote the mandatory defense.

Anyway, the time off-- ten months waiting on the Kambosos fight to happen and thirteen months since his breakthrough win versus Vasiliy Lomachenko-- was most definitely not Lopez’s friend.

The Brooklynite got sick, got well, gave a bunch of oddly grandiose interviews, and, for some reason, brought his belts to the Canelo Alvarez-Caleb Plant fight, where he gave off an insecure little kid vibe when he rushed on stage to pose with those belts alongside Alvarez, the newly-unified 4-belt super middleweight champ.

In early October, Lopez gave an especially eye-raising, red flag-waving interview where he talked about being “with the greats” and mentioned himself in the company of legends such as Muhammad Ali, Joe Louis, Rocky Marciano, Mike Tyson, and Willie Pep. And then, nearly in the same breath, he lamented about “ain’t no love in this” and how his accomplishments made “everybody hate” him.

That particular little-boy-lost interview prompted me to write this:

"There’s more than a fine line between confidence and bat-shit crazy delusion...and Teofimo Lopez is slowly creeping past that line....They say pride comes before a fall. And, although Lopez likes to talk about himself as the level-headed throwback to a better time in boxing, he’s been giving every appearance of being someone on the precipice of a humbling tumble."

Well, shit, the man sure did tumble. But based on what we saw post-fight on Saturday, however, it’s pretty clear that he didn’t learn a damn thing about reason-based humility.

“[You're] a hell of a fighter, but I won tonight. Everyone knows that,” Lopez said in the post-fight interview, alongside a jubilant Kambosos, drawing boos from the overwhelmingly pro-Lopez Madison Square Garden Theater crowd. “The referee raised my hand. I won tonight. I don't care what anyone says, yo. I won tonight...I ain't no sore loser. I take my wins like I take my losses. At the end of the day, I'm a true champion. I came out here. I did what I had to do...I don't care what anyone says, man. I am as real as they come. And, watch, this is the takeover, man. We don't stop. we keep coming, yo. At the end of the day, man, I love you all. I won this fight.”

Honestly, the guy sounded like a mental patient. And he started to creep towards Deontay Wilder territory right after that, hinting at a conspiracy being behind his loss.

“I know how these people work. The referee knew I won tonight. Everyone knew I won,” he insisted, later saying that he rightfully deserved to win 10 of the 12 rounds.”

Given the look in his eye and the ill-reasoned words jumbling out of his mouth, a major meltdown at some point soon wouldn’t surprise me one bit.

If/When he touches back down on planet Earth, though, he’s going to have to do some soul searching and professional fine tuning. For example, he may want a trainer whose best between-rounds advice is better than “Fuck this motherfucker up already!”

Yeah, if Teo Jr. is immersed in delusion, trainer Teo Sr. may be the one holding his head underneath it. Getting away from daddy may be the first (big) step towards putting a very talented natural fighter on to a track where he’s more than a brilliant, but momentary, shooting star. Sr. is talking of Jr. making the move to 140 next, which may be a pragmatic career move, but is also a smart way to blame this loss on something other than poor guidance of a young man in need of guidance.

Now, on to the positive, life-affirming stuff.

George Kambosos, who had been dicked around for months and forced to wait and wait for his mandatory title shot as Lopez got infected and Triller bumbled about, pulled everything together at the right time for a stellar effort. He showed zero deference to Lopez’s power and all-around aura and just went about his business, meeting a testosterone-heavy push by the defending champ with steely resolve and smart counters.

The Australian didn’t do anything earth-shaking when it came to technique or tactics, but he worked very well within his own skill set and, most importantly, refused to be bullied or intimated into “knowing his role” as the decided B-side and 13-to-1 underdog.

Right now, the thought has to be that Kambosos put in a once-in-a-lifetime performance against a vulnerable fighter primed for a humbling. This means his phone will be ringing off the hook as lightweights or near-lightweights race to get to someone they see as a moderate-risk, high-reward beatable 3-belt champ. It’ll be Kambosos’ job to assert himself as something more than a transitory, placeholder world champ.

The odds are against him keeping those belts for long. But, of course, the odds were also against him winning them in the first place.

I’d be remiss, by the way, if I didn’t mention the other great fight of the night-- Brandon Figueroa vs. Stephen Fulton Jr..

While it didn’t have the headline-friendly, cult of personality-ish push that Lopez-Kambosos had, this super bantamweight unification bout delivered on every bit of the promise it held, making its own case for Fight of the Year consideration.

The defending WBO champ, Fulton, would take Figueroa’s WBC belt in the all-action clash via majority decision, but a draw or a Figueroa win would’ve been legitimate outcomes as well. It was that close, with Fulton landing the crisper punches, but Figueroa applying more pressure and digging to the body better. The great warrior vibe of two great efforts was only soured, slightly, by Figueroa’s post-fight Teofimo Lopez-style “Everybody here knows I won” lament.

While a rematch would be the logical call for a brilliant and close war like this, the 24-year-old Figueroa said that he plans on moving to 126. If that happens, then Fulton moves on, just one fight (versus IBF/WBA 122 lb. champ Murodjon Akhmadaliev) away from unifying all four titles.

Boxing doesn’t frequently overachieve when it comes to delivering more entertainment than it promised, but Saturday was a rare exception. And, to make things even better, the DAZN vs. Showtime  conflicting cards were timed perfectly (but I’m assuming not intentionally) to allow fans to see both main events live and without overlap.

All in all, the stars aligned themselves perfectly for a great night of boxing.