NOTES FROM THE BOXING UNDERGROUND: ARUM RACIST? DOES IT MATTER FOR CRAWFORD'S LAWSUIT? 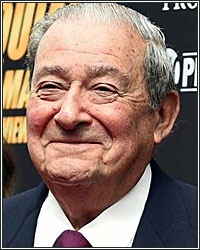 So, Terence Crawford has sued Bob Arum. He seeks damages up to $10 million for breach of contract and is alleging that “revolting racial bias,” which manifested itself in the way he was promoted to the public, stifled his career and kept him from landing the big-score fights he’s been wanting.

What do I make of this?

I think there’s deep-seated racism that runs all throughout the sport-- from the business bossmen at the top, to the media, right down to many of the fans. Bob Arum is a creature of this boxing culture. And, personally, there’s zero doubt in my mind that Arum has some outdated, racist ideas floating through his head, heart, and soul.

Arum, after all, is the guy who, when asked about the difficulty in making a Crawford-Errol Spence fight, created a scenario where a jive-talking Al Haymon advises Spence to not “listen to the white guy [about a Crawford fight]” and to “Listen to me, brother. We're part of a brotherhood.” I don’t think it’s possible that a guy who thinks like that and goes public with something like that ISN’T a racist prick to some extent.

But the problem with Crawford’s lawsuit-- at least the racism stuff-- is that he has to prove that Arum’s racism actually affected the way he promoted him. And, well, barring some earth-shaking, smoking gun hard copy revelation, I just don’t think that’s going to be possible. That’s the problem with the allegations made in the Crawford suit. Proving that Arum’s racism trumped his desire to exploit Crawford for the most monetary gain possible is going to be hard.

Can you sue someone for simply being an asshole?

That Arum is inept and indifferent in promoting to the African American community is a given. But, shit, the man is inept and indifferent in promoting, period. Don’t give me that shit about him being in the business since Jack Dempsey grew pubes or how he’s in the Hall of Fame or how he’s handled so many great fighters over the years. The man is good at hustling his way into deals and at playing the system, but at promotion? Look around. Do you see any real, actual PROMOTION of the sport coming from this man? Show me one slightest bit of effort to promote the sport beyond the already-sold base. Even with a booster seat to the mainstream via ESPN, he’s done nothing to sell the sport to the masses or provide for it’s long-term health. If anything, he’s one of the core reasons boxing has drifted further away from the mainstream. From taking easy payouts to lock the sport behind premium paywalls for decades to fostering a system of corruption that turns off the mainstream sports world, Arum’s a goddamn de-promoter.

To see him drop the ball when it comes to promoting Crawford is no surprise at all. He’s dropped the ball with all of his guys to varying extents-- at least in the sense that none of them can be considered breakthrough stars. Arum’s Hall of Fame promotional abilities can’t even turn the charismatic soundbite machine Tyson Fury, who should be a slam dunk when it comes to mass US appeal, into someone who can sell out more than 20% of an arena or into a pay-per-view presence without the aid of Deontay Wilder.

The difference when it comes to Arum’s relationship with Crawford, though, is that Arum blamed Crawford for a lack of drawing power and went public, multiple times, with disparaging remarks about his inability to generate money. Arum went out of his way to tell everyone how un-marketable Crawford was, while he was still, ostensibly, promoting him.

But, then again, that could just as easily be chalked up to Arum being a greedy, vindictive asshole rather than a racist prick. It’s not uncommon for him to try and destroy a fighter who decides to leave his flock-- and Crawford has clearly had one foot out the proverbial door since last year. He’s done this with every fighter with any degree of star power who’s left Top Rank on top and without being beaten on the way out. De La Hoya. Mayweather. Mikey Garcia. Remember when he bashed an outgoing Nonito Donaire with: “I mean, it’s not like I got another Manny Pacquiao...I got four fighters who could probably beat him. He’s not a pay-per-view fighter; the Filipinos don’t support him?” He even side-swiped the beloved Manny Pacquiao when he became a promotional free agent, calling him “an old man” and insinuating that he couldn’t compete with Terence Crawford, who was still in his good graces at the time.

For Crawford, there’s a much better chance of winning on the basis of breach of contract. There’s the $900K that was promised to him if Arum didn’t deliver a serious attempt at an Errol Spence fight offer in 2019. There’s also the $4.5 million in dispute over a contractually obligated fight not delivered to him in 2019.

But the racial stuff? I seriously doubt it gets anywhere or delivers any sort of victory, moral or economic. In boxing, there’s just too much sludge everywhere to prove that one person’s particular sludge got you dirty.