NOTES FROM THE BOXING UNDERGROUND: THE JAIME MUNGUIA SHOW 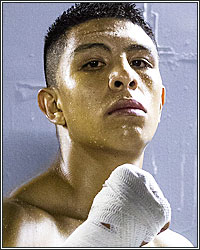 Jimmy Kelly had about as much chance of upsetting Jaime Munguia Saturday night at the Honda Center in Anaheim as I have in hooking up with Shakira post-breakup with Gerard Pique.

The 25-year-old Mexican fought like someone who knew that he basically just had to show up to win, giving away three of the first four rounds on my mega, ultra unofficial scorecard due to what may have been interpreted as general indifference. Realistically, it was just going to be a matter of time before the big kid would land something hard and knock the bangers and mash out of the UK pug. It was also pretty clear that Kelly lacked the punching power and main stage chops (just two and three fights ago, he was beating guys with records of 16-49-3 and 11-57-1) to keep Munguia from eventually walking all over him. That “eventually” came in the fifth round when the Tijuana native dropped Kelly three times en route to a merciful stoppage.

I’ve always liked Munguia-- he’s an affable, entertaining, earnest fighter with good energy about him-- but the Jaime Munguia Show is getting old now. This new strategy of dumping on Jermall Charlo (seemingly dreamed up and dredged up by co-promoter Oscar De La Hoya), publicly obsessing on getting Charlo to stop “ducking” him and stop “hiding behind” advisor Al Haymon, is downright annoying.

You just don’t get to aggressively claim that you’re being ducked when your team has turned down so many opportunities (Demetrius Andrade, Janibek Alimkhanuly, Carlos Adame, and even Jermall Charlo, depending on what you believe from the stories in the press). That just reeks of being fatally disingenuous. Even if THE fight you want IS out of reach, that doesn’t give you carte blanche to fight tailor made soft touches indefinitely.

The reality is that Team Munguia reeled back the level of Munguia’s opposition greatly after he followed up his WBO junior middleweight title-winning demolition of Sadam Ali in 2018 with a very uneven and potentially disastrous showing against Liam Smith two months later. He was clearly not ready for the full-on best of the best, and at 21, there was no reason to push him too far, too fast.

But Munguia is 25 now and getting the star treatment. He’s also ranked no. 1 as a middleweight by the WBO, no. 2 by the WBC and WBA, and no. 8 by the IBF. Plus, his people are certainly pushing the narrative that he’s ready for the world. It’s time to step up or step back.

At the very least, he needs to fight somebody who isn’t just slightly more imposing and qualified than the beer vendor at the Honda Center.

– Munguia co-promoter Oscar De La Hoya provided some comic relief during Munguia-Kelly fight week with his back-and-forth (with himself) on whether he knew or didn’t know who the hell Jaime Munguia was fighting on Saturday:

On Wednesday, in an interview with the MMA Hour, he said this about Jimmy Kelly: "I don’t even know who the hell he is...This kid (Jimmy) Kelly, who really-- I’m the biggest fight fan ever and I don’t know who he is."

At Thursday’s Munguia-Kelly press conference, however, he said this with a straight face: "I've been studying Kelly for awhile now and he's the real deal."

You can’t make this shit up.

So, yeah, promoters lie and Oscar is loopy. Tell us something we don’t know, right? The thing is, though, that lies and reality-bending, quick-turn total contradictions make EVERYTHING coming from that person and his people suspect. Which, in turn, affects the fighter, all of his dealings, and the way that fighter’s career progresses. In short, Oscar acting the fool makes Jaime Munguia look foolish.

– It doesn’t necessarily take a boxing genius to see the similarities in the marketing strategies of Gervonta Davis and Jaime Munguia. Both are playing almost exclusively to their base while working to build on that base with safe, favorable matchmaking aimed at accentuating their strengths and minimizing risk. Both have also been very successful at building their stars behind this strategy. Munguia has been in against considerably softer opposition than Davis, but there’s little difference in the paths to stardom both are taking. The only real difference is in how media and some fans treat both fighters for essentially doing the same thing and being pushed the same way. Munguia takes nowhere near the same level of flak as Davis. Why this is, well, that’s a topic for another day.