NOTES FROM THE BOXING UNDERGROUND: THOUGHTS ON BETERBIEV-SMITH, HANEY-KAMBOSOS II 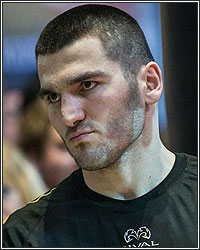 A couple weeks back, when doing the Devin Haney-George Kambosos recap, I opened with the lines, “Talent matters. Skill matters.” Well, I could’ve opened with that same lead-in when writing about the Artur Beterbiev-Joe Smith Jr. 3-belt light heavyweight unification bout this past Saturday at Madison Square Garden Theater in New York.

I’m not going to lie, I was pulling for Smith, the 9-to-1 underdog, to pull off the massive upset because I’m unabashedly pro-American-- as American fight fans SHOULD be. But I knew the script-flipping upset was unlikely to happen and fully expected the Long Island native, who is big in heart, but light in defense, to be stopped in some horribly ugly fashion.

Beterbiev delivered on expectations and also delivered to Smith the only three knockdowns of his pro career en route to a second round stoppage victory.

There’s really not much to say about this, except that there’s now only one fight to make at 175. Beterbiev, who added Smith’s WBO belt to his WBC and IBF straps, needs to be matched against WBA champ Dmitry Bivol for a full 4-belt unification. There are a couple of okay detours for both titlists-- Anthony Yarde, who is rumored to be next for Beterbiev, and Gilberto Ramirez just off the top of my head-- but there’s nothing bigger or more important than Beterbiev-Bivol (unless Canelo Alvarez brings his drawing power back up to 175...which, honestly, I don’t think he will, despite all that stuff about him chomping at the bit for a Bivol rematch).

But, as we all know, promoter Bob Arum is the king of over-marinade and that’s clearly evident in his stated desire to match Beterbiev against Yarde next.

Beterbiev should scramble Yarde and then we’ll see what’s what with a Bivol fight. But I wouldn’t hold my breath. Both Beterbiev and Bivol have expressed their desire to fight one another next, but neither is the type of businessman-fighter to make waves, hoist his career on his shoulder, and demand autonomy in selecting opposition.

So, the likely scenario sees both dutifully plugging along, wanting the “big” one and settling on a lot of half-interesting filler, bogged down by boxing business politics and out-dated promotional ideas.

Hopefully, I’m wrong because Beterbiev-Bivol is near the top of my wish list of fights.

You have to wonder about what audience will be there to witness the rematch of a fairly dull, totally one-sided bout where Haney cruise-controlled to victory while only having to use a small handful of his available tools.

And you REALLY have to wonder about the financial viability of a part 2 when part 1 wasn’t as much of a blockbuster as organizers had hoped.

Despite a good amount of hype and 40,000 raucous fans packed into Marvel Stadium in Melbourne, Australia-- which allowed for the deceiving face-value appearance of financial success-- Kambosos-Haney I didn’t really deliver in terms of bankability.

The 4-belt lightweight unification bout only generated around 50,000 pay-per-view buys in Kambosos’ native Australia-- half the number of Tim Tszyu’s pay-per-view bout with Bowyn Morgan in 2020. It also failed to produce any ratings spike for ESPN in the United States, with an average audience of about 1.3 million viewers that places it right below Shakur Stevenson-Oscar Valdez and just above Vasiliy Lomachenko-Richard Commey on the ESPN Boxing TV ratings list.

Considering the big purses involved (Kambosos earned the equivalent of $6-7 million USD for this fight, the highest-ever purse for an Australian fighter, and Haney reportedly got $3 million-- plus PPV revenue share for both fighters), there couldn’t have been much meat left on the bone for the non-fighting participants in the event. So, the suits can’t be all that enthused about the rematch, either.

But...a contract’s a contract, right? Until someone can find a way out of it, anyway. And Kambosos is either really convinced that he can do better in his second crack at Haney or really devoted to getting that second payday.

So...stay tuned for Haney-Kambosos II. Let’s get that one over with ASAP and move on to some of the really important fights at 135. But, then again, Haney is now co-promoted by Bob Arum and, probably, about to be drowned in marinade.