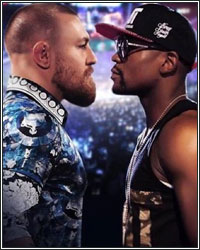 Sources close to the information have informed us that Hall of Fame legend Floyd Mayweather and UFC star Conor McGregor are currently in talks for a potential rematch. McGregor virtually confirmed the news himself when he just recently took to social media to post a picture from their epic first bout with the caption "I accept".

The first time they faced off was nearly 5 years ago on August 26, 2017, when Mayweather scored a 10th round TKO victory in the final fight of his professional boxing career. That fight generated 4.3 million domestic pay-per-view buys (which still stands as the 2nd largest all-time) and more than $600 million in total revenue.  According to our sources, Mayweather would pocket another 9-figure payday if the two sides can come to terms. Be sure to check back soon for more information as this story continues to develop.