NOTES FROM THE BOXING UNDERGROUND: MIXED-UP ON RYAN GARCIA 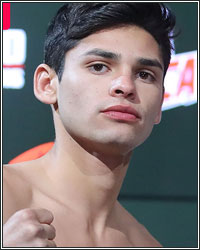 It’s hard to NOT see Ryan Garcia as a sure-thing, elite-level superstar when he turns in a performance like Saturday’s three-knockdown stoppage of Javier Fortuna.

But there are conflicting layers to all things “King Ry” and anyone claiming to be sure of how his boxing story will play out is either a monster-sized Ryan Garcia fan boy or a sour-pussed Ryan Garcia hater.

On one side, there’s all the very obvious stuff that makes proclaiming him the next big thing a no-brainer. His hand speed is other-worldly and his rocket left hand is the kind of potent weapon that immediately puts him into the top 1% of professional fighters. It’s going to be hard for any opponent to find a way around that big shot. And if he’s taking trainer Joe Goossen’s guidance seriously, staying in fighting shape, tightening up his defense, and implementing a sharp jab as a set-up to the left, the task of fighting him becomes even more daunting.

Fortuna, for example, was never able to get in the fight because he just never could find a way around those fast hands of Garcia’s. By the second round, the former world champ looked hopeless and resigned to defeat.

In terms of star power, his next-level chops are also clearly evident. He’s got the looks, charisma, and social media following to be the very definition of a crossover star. The attention he gets when fighting– positive and negative– is a testament to his marketability and bankability.

But then there’s the flipside to Ryan Garcia.

This is the same mixed-up kid who, as his star just began to ascend, could only get himself to the ring once in the span of February, 2020 to early April, 2022.

This is the same kid who preceded this dominant performance against Fortuna with a sloppy, go-nowhere bout against the lesser Emmanuel Tagoe, where he looked like a three-fight novice, loading up on arm punches and with seemingly no knowledge of how to cut off a ring or force a reluctant opponent to fight.

This is also the same kid who papered the online Universo Pugilistico with dead-end rumors of mega-bouts with everyone from Manny Pacquiao to Gervonta Davis to Devin Haney while sporting the look of someone who, frankly, wanted to be anywhere BUT a boxing ring.

But good, strong performances like Saturday’s will cancel out much of the constant ADD chatter from the 23-year-old and wipe away some of the bad energy from the past.

The problem is that you just don’t know what you’re going to get with Garcia. It would’ve been just as likely for him to turn in a tepid, technically-flawed performance on Saturday (or pull out of the fight altogether) as it would’ve been for him to deliver a brutally beautiful demolition.

A last minute weight limit boost from 135 to 140 helped Garcia be as big as he needed to be against a naturally smaller opponent. And favorable matchmaking against an older, not-all-that-mobile opponent who did his best work at super featherweight ensured that he would have his best chance to shine.

Matchmaking sleight of hand, though, is universal in boxing. Every young star with even a marginally competent promoter/manager is matched against opposition whose risk level is significantly less weighty than their name value. Show me any star and I’ll show you a path to stardom built on smaller, past-prime former champs, limited one-hit wonders, and faded stars of yesterday. So, don’t crucify Garcia for playing by the rules of the game.

But, also, let’s not jump to deify a young man who’s yet to prove that he can keep his own train on its tracks and who, honestly, gives off the distinct vibe of possible imminent implosion at any time. Regardless of what the embarrassingly zealous DAZN broadcast crew over-sold all night, Garcia is NOT a finished product yet and there’s still some ways to go before he can be seen as a true, consistent elite-level presence. There’s certainly no crime in a 23-year-old fighter being a work in progress.

Don’t be swayed, either, by Garcia calling out Gervonta Davis or anyone else for that matter. Because, while the young fighter may be earnest in his desire to fight the best and hurdle boxing business obstacles in the process, his DAZN host has not always been as open to compromise as they like to be portrayed. The streaming service has become infamous for carrying the banner for cross-company, cross-platform cooperation, but then insisting on having all this cooperation happen on their platform and for the benefit of their company.

But that’s not Garcia’s fault, either.

For the time being, people should just cool down on all the oddly obsessive love and hate and just appreciate Ryan Garcia for what he is-- an exciting and immensely talented young fighter whose personal flaws will make his professional growth and development a compelling boxing soap opera.