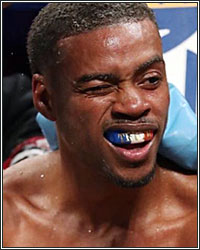 This Thursday, like every Thursday, I ask you to pull up a seat alongside my bulging, bulbous sack and wait for a load of gooey, salty boxing truth to be shot right into the faces of boxing’s purveyors of ignorance. This week, we have questions/comments regarding the reality of the Jake Paul-Hasim Rahman Jr. cancellation, the odds of Spence-Crawford happening, and hating on GGG.

Any thoughts on Jake Paul-Hasim Rahman Jr. falling through at practically the last minute and why it happened, really? The world is crushed.

It’s rough, but somehow the world of boxing will recover. LOL. I listen to everything. I hear everything. I also question everything. The official take is about Rahman’s weight, how he wasn’t on track to make the agreed upon 205 lb. limit, and how he told Jake Paul’s team that he planned on coming into the fight at 215 lbs., instead. All of that may be true, but the lickety-split decision to cancel the Madison Square Garden show at the first convenient moment that presented itself leads me to believe that maybe Rahman’s weight wasn’t the only (or most important) reason for calling off the card. Shortly before the cancellation, it was widely reported that ticket sales were very sluggish and that there’d be a chance that Paul-Rahman would play to a half-empty house on August 6. Slow ticket sales also didn’t bode well for the salability of the $60 Showtime pay-per-view. My take? The weight was an issue, but it also gave Paul, Showtime, and Most Valuable Promotions a convenient escape door for what was shaping up to be troubled promotion and money-loser.

Rahman in the Right?

Hasim Rahman Jr. has been catching a lot of undeserved flack over this Jake Paul nonsense but, you know, of all the talking heads I've listened to weighing in on the falling apart of the Paul/Rahman match, some taking Jake Paul's side, some taking Hasim Rahman Jr's side, some going as far as calling Rahman a scumbag, they all have missed this key point- Rahman did NOT breach the contract. The fact of the matter is, Team Paul was simply outmaneuvered in this scenario. They low-balled Rahman thinking he would decline the offer and then they could tell the world "Look, I tried to fight a real heavyweight but, HASIM RAHMAN JR. didn't want to fight me!", but Rahman agreed to all the terms. The contract laid out the weight and also laid out stipulations that would penalize Rahman for not making the weight, penalties that could potentially reduce Rahman's purse to the state minimum of $5000- and that is where Team Paul was outmaneuvered. Team Paul completely underestimated Rahman's willingness to take a $5000 purse just to get the exposure he would've got from giving Jake Paul a good beating from pillar to post. So, what did they do? They tucked tail and ran, simple as that. Rahman was completely within his contractual right to come in at any weight he wanted to, really, while being penalized accordingly, of course. To be fair, I'm sure that the contract had a built-in "kill switch" for Jake Paul, so he was completely within his contractual right to cancel the fight, which he did. JAKE PAUL CANCELED THE FIGHT because things didn't go his way, therefore the blame should be laid squarely at the feet of...Jake Paul, not Rahman. That's how I see it anyway, what do you think?

There’s a lot of common sense in what you’re saying. However, I think, maybe, you might be giving Rahman and his team too much credit when it comes to their ring psych prowess. I highly doubt that their plan was to curb stomp the spirit of the agreement, lose all of their money to weight gerrymandering, and fight for the absolute state-mandated minimum. They had to know that no opponent, much less Jake Paul, would follow through on a fight where the other guy intentionally blew past all contractual stipulations. Putting it the way you did, it almost makes Rahman look like the guy who never intended on fighting and just wanted the publicity push provided by a few weeks of main stream fight promotion. I think it’s most likely that Rahman legitimately tried to make the weight, but then, when he couldn’t do it,  was hoping to sacrifice a bit of his purse for a few more pounds on his side while still making the fight happen. He was probably hoping on a reasonable (for him) compromise, especially since the fight was so close. But the organizers, seeing the sluggish public interest in the fight, jumped on that weight stuff to kill what could’ve been a money-loser. I don’t blame Jake Paul one bit for stepping away from this fight, though. His plan was to fight a weight-drained, third-tier pro with some level of name recognition and steal a win. It was a cynical matchmaking strategy, but why would anyone expect anything less? The guy’s looking to cash in and juggle risk vs. reward while doing so. And when all the boxes weren’t being ticked off to his satisfaction, he walked away rather than put himself at risk. That’s some pretty savvy manipulation if you ask me. Somebody “boxing smart” has to be behind him. Anyway, like I said above, I think boxing will survive the disappointment of not seeing Paul-Rahman.

Like everyone, I’ve been overrun by endless “Spence-Crawford is happening” rumors for months now. If I can believe the hype, this fight is pretty much a done deal and all but set for this fall. But, like any real boxing fan, I’m a skeptic when it comes to what I see, hear, and read in the media. So, you tell me, what do you think are the odds that this fight will really happen?

I’ve been hearing and reading the same stuff as you and I’m also skeptical about believing any of it. I don’t have any real insider scoop on whether this fight is being put together or not, but I will say that all logic seems to be pointing to a big “yes” when it comes to whether it will happen. From the Spence side, what other big fights are there for him at 147 right now? He’s gone throw the best of the rest and a Jaron Ennis or Vergil Ortiz fight, right now, doesn’t make much sense. Terence Crawford is THE opponent for him and the only one who can be one-half of a blockbuster. Realistically, Spence could probably get away with one lesser fight in the immediate future, but I see him wanting the big fights for the big PPV money and Crawford is really the only guy who can bring him that. Crawford, meanwhile, could pick from a small handful of big names from the PBC roster and make some money, but I also see him itching to get right to the really big stuff. In this one case, I do believe the hype and I think the fight happens before year’s end. I say 75-25 it happens this fall.

Canelo-Golovkin 3 is just about a month and a half away. Are you getting ready to unleash all your petty hate for GGG and flush out your system? The way you hate on that man is embarrassing. Seems kind of personal to me.

Speaking reality on Gennadiy Golovkin only feels like excessive, “petty” hate because it smacks up against years of fans and media giving the guy a total free ride and an obscene degree of deference. I’m not going to go through the entire career resume of the man—yet again—but I will say that no fighter in recent memory has gotten so much acclaim for so little accomplishment (for so long) with so little scrutiny. Golovkin’s run was a hustle and a half. Hell, the man was already 12 defenses into his first world title run before he even faced anyone as good as Daniel Geale and, after 16 years as a pro, the only elite-level accomplishment of his career was a “might’ve deserved a win, maybe” draw versus Saul Alvarez in 2017.

As I wrote previously:

“If I’m being mega-generous with Golovkin, at least half of his defenses and world title fights came against opponents who had no business challenging for a middleweight title. And don’t give me this bullshit about nobody wanting to fight Golovkin, so he was forced to fight junior middleweights, second tier gatekeepers, and Foot Locker employees. With the way HBO was pushing him back in the day and the investment they made into building his brand (and DAZN’s current investment in him}, Golovkin was hardly some powerless sad sack at the mercy of the titans of the division. If he fought tailor made opposition, it was by Team Golovkin design. They sought out the best guys HE COULD BEAT when it came time to finding world ranked opposition.”

And this career’s worth of convenient matchmaking and bullshit excuse making was actually celebrated and fawned over by fans and media nitwits. Meanwhile, other fighters were cyber-lynched for cherry-picking or ducking or whatever if they went a year or two without a “real” challenge.

The double standard is what pisses me off.  Kudos to GGG for pulling off the hustle and making it to the end of a long, lucrative career with as little stress and strain as possible. That’s the goal of all fighters. But I don’t have to sit here and be quiet about the reality of things.