NOTES FROM THE BOXING UNDERGROUND: TAKEAWAYS FROM SATURDAY'S DAZN SHOW 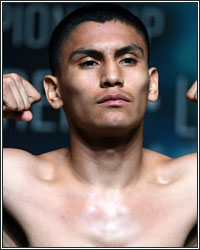 Here are a few takeaways from Saturday’s DAZN show at Dickies Arena in Fort Worth, Texas (with the glaring omission of the Marlen Esparza fight, which happened while I was dealing with some crazy goings-on here at my Mexican heartland home base):

– Vergil Ortiz Jr. picked right up where he left off a year ago as he pounded, pushed, and eventually stopped an ultimately overmatched Michael McKinson in nine rounds. The nearly one full year of inactivity for the 24-year-old all-action Texan was excruciatingly long for him and the frustration was clearly evident during the build-up to this bout, which was postponed from its original March date due to Ortiz suffering through a bout with rhabdomyolysis. Despite having a gigantic chip on his shoulder, though, the undefeated battler fought with controlled aggression and kept his composure against the awkward southpaw from the UK, who also came into Saturday’s contest undefeated. The awkward pairing led to a heabutt that opened a cut over Ortiz’s left eye in the very first round, but despite some clumsy moments here and there, the heavily-favored fighter got his work done and closed the show the way someone facing a clumsy-mover-spoiler should-- with crushing body work. At the end of the eighth round, Ortiz sent the brit to the canvas with a wicked body shot and, very early in the ninth, closed the show against a still-wincing McKinson, dropping him with a body shot again and forcing a merciful corner stoppage at the 27-second mark.

In case anyone was still doubting it, Ortiz is a legit “next big thing” in the welterweight division and, alongside Jaron Ennis, part of a one-two future superstar tandem at 147. With both Ortiz and Ennis on the verge of world title shots and main stage breakthroughs, the immediate future of the welterweight division, still ruled by Errol Spence and Terence Crawford, should be really interesting.

– What’s not to like about Vergil Ortiz Jr.? It’s bizarre that the kid got any of the negative press he did when he pulled out of his March bout with McKinson after being diagnosed with rhabdomyolysis. There’s not ever been the slightest hint of a rumor of Ortiz ever slacking off in training or eating his way out of 147, yet some in the media ran with “he can’t make weight” stories that they had to clumsily walk back after his medical situation became known. And to Ortiz’s credit, he clapped back at some of these media shitheads in the lead-up to Saturday’s fight.

In response to a virtual press conference question from former Ring Magazine writer and genuine know-nothing pantsload, Ryan O’Hara, who was apparently on the misinformation bandwagon back in March, Ortiz pulled no punches:

“I've learned a lot of things, especially things like interviewers and reporters talking about stuff they don't know, especially on Twitter, including you. For that reason, I will not be answering your questions today or ever.”

To a lot of media dimwits, all of this is like some virtual reality game to them. They don’t care about their responsibilities as media, the quality of their work, or how their words impact the real life human beings who actually work in boxing. And they aggressively don’t care because nobody, ever, holds their feet to the fire or makes them accountable for their words. Even after a high-profile, very public lashing by Ortiz, nobody in the establishment media who reported on Ortiz’s blast at O’Hara even cared to mention O’Hara by name...because, apparently, they don’t want to embarrass a “colleague.” Well, some “colleagues” need to be curb stomped when they deserve a curb stomping. Members of the media need to grow a pair and not make it so that a fighter has to be more of journalist watchdog than the journalists.

– Does Blair “The Flair” Cobbs have a future as a high-end welterweight player? No. But that doesn’t mean that he can’t have a meaningful career as a high-end third-tier welter or low-end second-tier gatekeeper-type. His performance on the Ortiz-McKinson undercard Saturday night against an alarmingly flat Maurice Hooker was hardly the “A+” masterpiece the perpetually befuddling DAZN broadcast crew painted it to be. Cobbs dropped Hooker three times in the first two rounds and then slightly edged a very diminished “Mighty Mo” the rest of the way, with plenty of flat-out running filling out the later rounds en route to a 10-round unanimous decision. But, still, it was a good win after a tough KO loss to Alexis Rocha in his last fight. Realistically, Cobbs is cannon fodder for a “real” welterweight player, but the 32-year-old is earnest in his efforts and charismatic enough to draw attention, so he should still have some solid future ahead of him if he’s matched right and not offered up for sacrifice too many times to “real” top guys, like Vergil Ortiz.