NOTES FROM THE BOXING UNDERGROUND: ANDY RUIZ GETS BACK ON TRACK 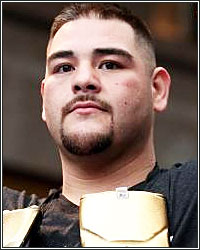 With both fighters possessing high-end skills for big men and true grit tenacity, it was an easy call to say that this one would be a good one. And, despite long stretches of tactical chess match, everything pretty much played out true to form.

I thought the judges’ scorecards were closer than they should’ve been (114-111, 114-111, 113-112 for Ruiz...I had it 116-109, also for Ruiz) and it’s interesting to note that, if not for the three knockdowns scored by Ruiz, we would’ve had a majority decision draw. But there was nothing weird or foul or scummy about anything that happened Sunday night. That’s definitely a good thing. It was just a solid prizefight between two top contenders.

Ruiz looked good and looked pretty much like a fully actualized Andy Ruiz. He boxed well and let his hands go when he got his shots. In the post-fight interview, he talked about staying active and no greater truth could be told. If anyone needs to stay active and constantly focused on a task at hand, it’s a guy like Ruiz who is prone to distraction and self-indulgence. If he could come into fights consistently at the 245-250 lb. range (he weighed nearly 269 for this fight) ring life would be much easier for him, especially as he gets older. I mean, ideally, it would be better if he could make the 235-240 lb. mark, but we have to be realistic. Ruiz is who he is and will always make room for some nice pozole or some sabrosos tacos dorados.

What’s next for him should be easy to see. Fighting the winner of next month’s Deontay Wilder-Robert Helenius bout is a no-brainer. A match with Wilder, especially, would not only be a big-ticket contest, but also a big-time compelling battle and a direct prelude to another shot at a world title. Hell, if current WBC heavyweight champ Tyson Fury re-re-re-retires, we could see Ruiz vs. the winner of Wilder-Helenius be for the vacant WBC strap.

But first things first, Ruiz has to resist straying too far away from what the life of a legitimate world class athlete should be. This Ortiz win puts him back on the right track, now he just has to stay on that track.

As for Ortiz? He fought well, but the spotlight shined brightly on every flaw he has as an older fighter nearing the end of his run. He couldn’t sustain long stretches of activity and had to fight in bits and bursts. His punch resistance, which was in question coming into this fight, is still very much an issue after his three knockdowns. The big 43-year-old Cuban (who many say is probably older than 43) is still an upper-tier heavyweight, but it would appear that the clock has run out on his push for elite-level recognition and world title glory. He can still be a match for almost any of the big men and is capable of surprising anyone on any given night, but he’ll have to be matched carefully for the rest of his career to maximize his time left in the game. I wouldn’t at all mind seeing him against Robert Helenius early next year, if Helenius loses to Wilder.

All in all, Ruiz-Ortiz was nice. The undercard was solid as well. Isaac “Pitbull” Cruz added to his growing “next big Mexican thing” status with a brutal second round KO of Eduardo Ruiz. Abner Mares came back after more than four years off to battle Miguel Flores to an entertaining 10-round majority draw. And in the opening bout of the pay-per-view telecast, Jose “Rayo” Valenzuela was upset by late replacement Edwin de los Santos via shocking third-round stoppage.

Given that you had the money to pony up the PPV asking price, it was a pretty entertaining boxing night for a pre-Labor Day Sunday.

I’d be remiss if I didn’t take some time to acknowledge the passing of my good friend, colleague, and fellow rabble-rouser Ted Sares, who died last week at the age of 85.

Ted was a prolific and knowledgeable boxing writer and one of the “real” ones. He wasn’t a glad-handing shill or useful idiot like so many boxing writers out there feasting on pennies and free media buffets. He was also a successful businessman, a family man, and a power-lifting senior citizen, who was, at one time, officially the strongest senior citizen in America. Most of all, though, he was my friend.

As I wrote in a tribute to my friend elsewhere:

“Ted’s nickname was ‘The Bull,’ but I never called him that. I didn’t want to be a ‘buddy’ like that. He was more than that to me. He believed in me and my abilities as a writer when it seemed that nobody else did, when establishment media-types were blackballing me from the business for reporting on media kickbacks and flat-out bribes. There was a good, long stretch of time when Ted believed in me more than I believed in myself. And it was his friendship that pulled me through those tough times.

When Ted Sares touched your life, you felt it. I feel it. I’m a better man for it.”