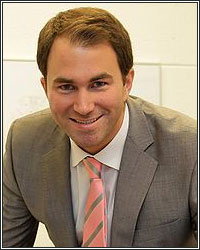 Will this be a chance for the 25-year-old Paul to prove that he is probably the best friend boxing has at the moment?

For those unfamiliar with the recent dust-up between the YouTuber/Boxer and the Matchroom Boxing bossman/DAZN figurehead, it all started with Paul making an accusation of corruption against judge Glenn Feldman and Matchroom Boxing

“I still think Amanda Serrano [who he promotes] won the fight,” Paul told iFL TV when asked about his fighter’s April split decision loss to Matchroom’s Katie Taylor. “And then you see how this judge Glenn Feldman, who had the biggest gap between Taylor and Serrano. Everyone pretty much had it a draw… a draw or that Amanda won. But there’s this judge, Glenn Feldman, who scored it such a big gap for Taylor, gave rounds that Amanda clearly won, to Taylor.

“Then this judge, Glenn Feldman, shows up in Saudi and scores Anthony Joshua to win (against Usyk). Everyone who watched the fight (knows) it’s not a split decision. Usyk had a runaway victory, clearly won the fight. This judge, Glenn Feldman, gives it to Anthony Joshua? It’s like a repeated crime here. This type of shit, I’m going to call it out here in boxing because it’s bullshit. Clearly, this guy is getting paid money by Matchroom Boxing.”

Paul put himself in lawsuit territory by then acknowledging that he was dead serious, making "a bold statement and an accusation” that he doesn’t take lightly. He said he felt the need to speak up because “[the payoff is] just blatantly obvious. And they're not even trying to hide it."

Hearn responded as we all pretty much knew he would-- litigiously.

According to TMZ, the promoter has filed a defamation lawsuit against Paul alleging that the 5-fight novice pro boxer "made outrageously false and baseless allegations” that caused damage to the reputation of his promotional company.

Hearn/Matchroom are reportedly seeking in excess of $100 million in damages.

So, what should we make of this lawsuit? And how could this legal beef make Jake Paul boxing’s best friend?

Hearn and Matchroom have no intention of following through with this lawsuit. Defamation lawsuits are exceedingly difficult to win (and costly to pursue). They would have to prove real monetary damage from what Paul said. And in an industry where corruption is taken for granted as part of the business culture and where, historically, shady dealing have shown no impact on revenue generation, there will be no damages to show. Hearn and Matchroom did, however, have to make a show of defending their “honor.” My guess is that the lawsuit will eventually disappear and/or be settled pretty quickly.

Now, to the second part.

If the lawsuit DOES proceed and it runs its course, Hearn, Matchroom, and DAZN (at least indirectly), will have to open their books up to the world in the discovery process. Everyone will be able to see all of that proprietary information DAZN, especially, has been trying to keep in-house, under wraps. Sales, revenue, buy rates, subscription numbers-- it’ll all be public record. It’s in nobody’s best interest to make this kind of sacrifice in pursuit of a long shot chance at a courtroom defamation win.

The much bigger benefit to boxing, though, is that an ongoing lawsuit would shine a much-needed spotlight on the rotten, incestuous inner-workings of how officials are selected in boxing.

While a state’s commission is ultimately responsible for appointing the three judges for a fight, the pool from which those three are selected is made up of judges pre-approved by the sanctioning body (or bodies) which sanctions that bout. And we all know just how “accommodating” these sanctioning bodies can be to promoters, who provide the overwhelming majority their operating budgets.

Once the judges (and other officials) are selected (from the list of “acceptable” officials), the promoter is then responsible for not only providing payment to the judges (via payment to the commission, which then compensates the judges), but in some states, required to provide for food, accommodations, and a per diem to cover the judges’ expenses.

So, in short, the promoter-- the one with the most to win or lose from a fight-- has pretty much ultimate say, through the puppet sanctioning bodies which establish the pool of judges from which commissions can select, as to who will judge and officiate a bout featuring his fighter. And they’re also responsible for paying those officials.

“Believe it or not, the promoters pay the judges,” affirmed former two-division world champ and TV commentator Bobby Czyz in a 2009 Fight Hype interview. “The judges are appointed by the commission and the promoter pays them. That’s part of his responsibility. Now, the sanctioning bodies, what they’ll do is say, ‘Any one of these 12 judges, we’ll accept’ because the sanctioning bodies have to accept the judges or they won’t sanction it...”

Per Mitch Abramson of the New York Daily News in a 2009 article:

“…it’s the relationship between the judges and the promoters that should be examined.

In the dense world of boxing, judges who score these fights are on the payroll of the event’s promoter.

For appearances sake, the promoter hands the check over to the commission, who then delivers it to the judges. But the result is the same: The promoter is paying the judge to make a decision in a fight the promoter has a financial stake in…This is outrageous. In no other major professional sport is a team owner responsible for the salary and housing of its officials.”

Glenn Feldman may not be directly compromised. Other judges may not be directly compromised. But the system is set up in a way that begs corruption and convenient incompetence, even if it’s entirely at a subliminal level. The implication is clear if you’re a judge– if you don’t score fights the “right” way, you may not get that next big assignment. No easy paycheck, no paid vacation, no comp hotel room, no per diem, no adrenaline rush from being ringside at a big fight.

And the “right” way to judge seems always to be in favor of the house fighter, whose promoter is the one paying the judges and allowing for these awesome perks. Do you think it’s a coincidence that controversial decisions almost always favor the house fighter?

The inner workings of the judge selection process in boxing are almost never written about or talked about in the boxing media. And with good reason. This is an absolutely unacceptable way to run a sport where athletes’ lives and livelihoods are at stake. To know how things work, how utterly corruptible the system is, is to see the entire sport cast in a horrible, almost irredeemable light. The media, which leans heavily on money and favors doled out by the sport’s promoters, has kept boxing’s dirtiest little secret from being common knowledge and a source of reform-inspiring outrage or binding government legislation.

Outsiders, motivated to take a long enough peak behind the curtain, are boxing’s only hope for redemption in this area. This is why Jake Paul could be a most unlikely hero to the sport.

But all of this is probably a moot point. The Hearn/Matchroom v. Paul lawsuit will only go as far as a few rounds of headlines. Nobody but nobody in the boxing business wants their business to be known.

True fans of the sport and us outlaw media types can dream, though.