NOTES FROM THE BOXING UNDERGROUND: NEXT YEAR IS THE YEAR... 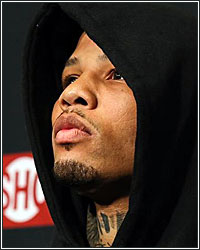 I think we can all pretty much agree that the year in boxing, 2022 has been about as satisfying as a shart in a Walmart checkout line.

Off the top of my head and without double checking online, I can’t think of one satisfying major fight all year. I mean, yeah, there were good, smaller fights. But blockbusters or even semi-blockbusters? Blockbusters/semi-blockbusters that had me jacked with anticipation and satisfied after the fact? Nope. And the rest of the year doesn’t look that hot either. This is definitely not a good look for a year where all the subscription fees and pay-per-view costs have made being a boxing fan so exceedingly pricey.

But, call it hope springing eternal or, perhaps more correctly, the sports fans equivalent of battered wife syndrome, I have some hope that my beloved sport can change.

The optimist may look at the coming year as offering the perfect opportunity for that change.

2023 already has one big, interesting fight tentatively slated for March-- David Benavidez vs. Caleb Plant. Granted, Benavidez-Plant is not a big blockbuster, but it’s an evenly-matched bout between two legit high-end contenders in the prime of their career. It’s also a bout that has been dangled like a carrot in front of fight fans for awhile and, as we all know, boxing rarely lets the donkeys take a bite of the dangling carrots these days.

There are also a couple other big fights that seem doable for the coming year.

A Tyson Fury-Oleksandr Usyk four-belt heavyweight title unification bout, despite the inability to get it done this year and the bad words tossed about between parties, looks like a lock for 2023. Fury and Usyk seem less likely to beat around bushes and drench themselves in marinade than many of their present tense pug colleagues.

Similarly, a four-belt light heavyweight world title unification between Dmitry Bivol (who beat Gilberto Ramirez in impressive, decisive fashion on Saturday) and Artur Beterbiev seems realistic next year. The two Russians seem to both want this legacy fight, which could very well be the biggest all-Russian world title unification ever.

A battle of top heavyweight contenders and former world champs in Deontay Wilder vs. Andy Ruiz also seems like a lock for 2023. Both big men have their flaws, but both are honest, earnest battlers and legit Top 5 heavyweights at the moment.

There are other “big” fights out there for the new year. Canelo Alvarez always makes for “big” and even if his “bigness” for 2023 is on par with his 2022 Bivol/Golovkin fights, that’s decent. Honestly, even a step below Bivol/Golovkin would be alright too. Former three-belt champ Anthony Joshua will also be back and, whether he wins or continues on his losing streak, he’s good for some quality viewing by fanboys as well as haters. Jermell Charlo and Devin Haney are unified champions in their respective junior middleweight and lightweight divisions and seemingly in line for nothing but big things in 2023 (Tim Tszyu and Sebastian Fundora for Charlo and Vasiliy Lomachenko for Haney).

Then, we get to the wishful that borders on being logical at this point.

Errol Spence-Terence Crawford may have capsized, with its half-dead body washing ashore on the banks of the social media coastline, but I happen to believe that this welterweight unification is not dead yet. As a matter of fact, I feel that both sides took such a beating after the fight fell apart this year that both fighters and their respective teams will almost be shamed into making the bout in 2023 (fingers crossed).

Gervonta “Tank” Davis vs. Ryan “King Ry” Garcia is starting to actually look like it may happen. I’ll preface that, though, by saying that it definitely WON’T happen if Garcia’s promoter Oscar De La Hoya keeps “promoting” animosity between the two sides.

I swear to god, there are time when “The Golden Boy” seems to be doing such a horrible job at bridging gaps and building bridges with Davis’ team that it makes me think he doesn’t really want this fight for his guy. Then, I remind myself that Oscar is Oscar-- the brilliant boxer who is a not-so-brilliant human being or businessman, but who has the good fortune of having a good team behind him to right the GBP ship every time he blunders his way into almost wrecking the whole operation.

Golden Boy succeeds DESPITE The Golden Boy and I believe that will be the case in getting a big fight for “King Ry,” whether it be against Davis or some other big name in the 135-140 weight range.

I just happen to feel that Tank Davis and his people, needing a really big, winnable fight to raise his star profile even higher after a somewhat “off” year, may come to their senses and get this fight made before Garcia gets better or retires himself.